EXPLORE the Area de Conservacion Guanacaste with this slideshow, check the location map and get all the facts and information below. 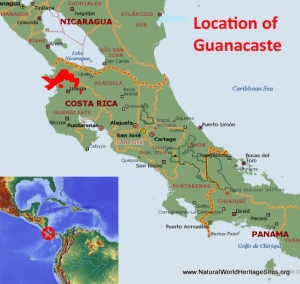 Location and Values: The Area de Conservacion Guanacaste is a complex of adjoining protected areas in the northwest of Costa Rica spanning the ridge of volcanic mountains that forms the backbone of Central America.  The conservation complex covers an exceptional diversity of ecosystems, mostly on the Pacific side of the Guanacaste mountain range, including a substantial area of diverse marine and coastal habitats, and a variety of terrestrial habitats ranging in altitude from sea level up to the summit of the highly active Rincon de la Vieja volcano at 1,916m.  Most of the area is covered in tropical dry forest, with significant areas of coastal mangroves, lowland rainforest, montane humid and cloud forest, oak forest, grassland savannas and evergreen gallery forests.  Much of the dry forest is undergoing a process of natural restoration following past disturbance from cattle ranching and other uses, creating a particularly dynamic ecology.  In terms of biodiversity, the number of species recorded in all major groups is exceptional for an area of its (relatively small) size. For example, there are at least 7,000 species of plants and 500 species of birds. The conservation area provides sanctuary for many endangered species such as jaguar, tapir, various primates, leatherback and olive ridley turtles, American crocodile and spectacled caiman, as well as threatened birds such as the Military Macaw, Great Curassow and Mangrove Hummingbird.

Conservation Status and Prospects.  According to IUCN’s Conservation Outlook Assessment (2017) the conservation status of the Area de Conservacion Guanacaste is of ‘significant concern’. The IUCN report notes that Guanacaste ‘is facing numerous threats, including illegal resource extraction (illegal hunting, fishing, collection of sea turtle eggs and capture of some species for the pet trade), fires and pressures from the surrounding agricultural areas, including pollution by agrochemicals. While no systematic information is available about the impacts on populations of key species, the combination of these factors raises serious concerns. While potential impacts of the geothermal energy project close to the boundaries of the property at the Rincón de la Vieja sector have been assessed by the State Party as low, further consideration should be given to potential indirect and cumulative impacts. Climate change will have further significant impacts on both the marine part of the property, with increasing impacts on its coral ecosystems, and its terrestrial areas which are already vulnerable to fires. At the same time, the capacity of site management to address these numerous threats has been limited by the lack of financial and human resources. ’

The slideshow ‘tells the story’ of the Area de Conservacion Guanacaste, showing its landscapes, habitats, plants and animals, and illustrating some of the threats and conservation needs.  The photos were taken by Peter Howard during a visit in January 2019.  After the introductory photos of wooded hillsides and coastal areas the slideshow starts in the Santa Maria sector of the Rincon de la Vieja National Park.  Here the montane cloud forest is especially rich in species, including iconic species such as ocelot and white-faced capuchin monkey, with exotic tropical birds (including various species of parrots and toucans), snakes and a huge diversity of spiders and other invertebrates.  The slideshow continues with some contrasting scenes from the Junquillal coastal area, showing the dry woodlands that cloak the rocky hillsides, ‘forests’ of giant cactuses with spiny bromeliads at ground level.  In the mangroves here crocodiles lurk and tiger herons stalk the river banks.  Junquillal is the most accessible coastal zone within the Guanacaste Conservacion Area, although far more extensive coastal and marine areas exist in the Gulf of Papagayo in the Santa Rosa and Murcielago sectors.  The slideshow illustrates some of the oak forests, grasslands and other habitats of the interior of the Santa Rosa sector, and the mass congregation of Olive Ridley turtles that come to nest on the beach at Naranjo Bay.   It then continues with photos from the Pailas sector of the Rincon de la Vieja National Park where there are a number of volcanic features (fumaroles and mud pots) and attractive waterfalls, set within the wildlife-abundant tropical forests.  The slideshow ends by illustrating some of the conservation threats and challenges impacting Guanacaste and its wider landscape, including cattle ranching, thermal power and wind turbine plants, forest clearance for agriculture and the ever-present threat of fire.