EXPLORE MAURITANIA’S BANC D’ARGUIN NATIONAL PARK with this slideshow, check the location map and get all the facts and information below. 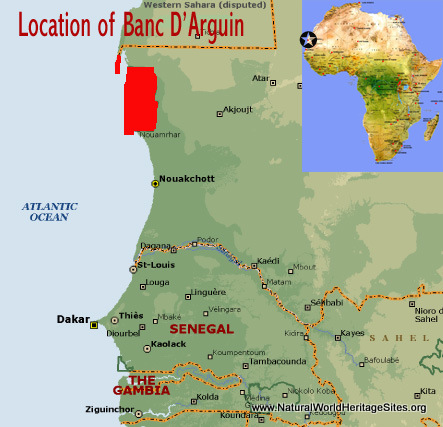 Values: The Banc d’Arguin National Park is divided equally between marine and terrestrial environments, but it is the extensive coastal shallows that give the area the unique qualities that justify its status as a world heritage site. These shallows (the remnants of a vast river delta from a bye-gone era when waters flowed from what is now the Sahara desert) support huge numbers of Palaearctic migrant waders, which converge on the area from northern Europe, Siberia and Greenland. An estimated 2.2 million waders over-winter in the Banc d’Arguin, including 2 million individual birds of just five species: Dunlin (818,000); Bar-tailed godwit (543,000); Knot (367,000), Curlew sandpiper (174,000), and ringed plover (98,000). This concentration of birds represents 30-70% of the entire population of the ‘East Atlantic flyway’.

REVIEW OF WORLD HERITAGE VALUES: The specific attributes which qualify Banc d’Arguin National Park for world heritage status can be summarised as follows:

Over-wintering site for massive numbers of migratory waterbirds. More than two million waders and waterbirds (30% of those using the Eastern Atlantic Flyway) over-winter at Banc d’Arguin – one of the world’s largest concentrations of wintering waterbirds. This is also the most important area on the Atlantic seaboard for breeding waterbirds, with 25-40,000 pairs of breeding birds belonging to 15 species. Several bird species of global conservation concern and endemic subspecies also inhabit this internationally-recognised Important Bird Area.

Outstanding example of ongoing ecological processes, driven by nutrient inflows from land and ocean. Banc d’Arguin is a dynamic coastal ecosystem unusually rich in nutrients, with windblown sediments from the interior of the continent and deep-ocean nutrients brought into the area by ocean currents and a permanent upwelling offshore. These nutrients are captured and maintained in the organic matter of extensive marshes covered with seagrass beds. This wealth ensures the maintenance of a marine and coastal environment sufficiently rich and diverse to support important communities of fish, birds and marine mammals.

Whale and common porpoise. A small population of about 150 monk seals is found north of Nouadhibou at the Cap Blanc Reserve (which lies outside the world heritage site, but may be included in a future extension). Four species of turtle frequent the area including the threatened green turtle as well as loggerheads, hawksbills and leatherbacks.

Extensive areas of dynamic intertidal ecosystems. The nutrient-rich shallow tidal coast has 630 km2 of mudflats, channels and creeks with a few relict areas of mangrove swamps. Lying within the tropics, these mudflats and associated communities of seagrass, salt marsh and mangrove are exceptionally productive and support the large aggregations of waders and waterbirds.

Extensive area of highly productive subtidal ecosystems. Beyond the mudflats lies an extensive shallow submarine shelf extending up to 80 km from the coast, of which6,300 km2 lies within the world heritage site. This is a highly productive marine ecosystem due to coastal upwelling which brings nutrients into the relatively warm coastal shallows. Here, rich invertebrate communities and seagrass beds support one of the richest fisheries in West Africa.

Extensive terrestrial ecosystems. Banc d’Arguin National Park includes 5,700 km2 of desert dunes, sand hills, sandstone cliffs, and islands where the Sahara desert meets the sea. Formerly the margins of an extensive estuary which was fed by waters from the African interior (when the Saharan region was much wetter than it is today), it continues to exemplify the ongoing ecological processes involved in desert ecosystem succession combining Saharan and Mediterranean influences. The terrestrial part of the site supports a relict population of Dorcas gazelles at the western limit of the species’ range.

CONSERVATION STATUS AND PROSPECTS: Although Banc d’Arguin National Park benefits from strong national and international support, and its core values are well protected, there is concern over a number of emerging threats originating beyond its boundaries. In particular, (1) there is a major oil field offshore which could result in a catastrophic spill, (2) the rich fisheries are already over-exploited, attracting large international fleets of trawlers into waters beyond the park boundaries and (3) the park’s waters may be polluted by new mining operations and industrial developments in the vicinity of the park. There are currently insufficient safeguards to protect the park’s resources against these potentially catastrophic threats.

MANAGEMENT EFFECTIVENESS: The legislative, institutional and financial framework for the protection and management of Banc d’Arguin National Park is strong, due in particular to the establishment, operation and financial endowment of the Fondation Internationale du Banc d’Arguin (FIBA). Management has been constrained to some extent by having its headquarters and most staff located in Nouakchott (120 km to the south of the park), but a new headquarters at Chami (on the park’s eastern boundary) should enable improvements in operational aspects and engagement with local communities. Protection of the surrounding seas needs to be given greater attention in order to meet emerging challenges from overfishing, the offshore oil industry and shipping of hydrocarbons.

REVIEW OF CONSERVATION ISSUES AND THREATS: The following issues represent specific threats to the ecology, conservation and values of the Banc d’Arguin National Park.

Over-fishing. Artisanal fishing within the park by members of the indigenous Imraguen community using traditional methods is considered sustainable at present levels. However, it is becoming increasingly commercial, and there is concern over the increasing number of non-Imraguen fishermen in the park, as well as the selective targeting of sharks and rays. Over-fishing of the waters beyond the park’s boundaries is probably a greater threat. Here fishing pressure comes from foreign trawlers (334 of which are licensed to operate in waters surrounding the park) as well as local artisanal fishermen from Nouakchott, a new fishing port at Tanit and other nearby areas.

Potential for oil spills. Offshore oil/gas exploration and exploitation is underway close to the southwest boundary of the park, without appropriate safeguards in place. The risk of a catastrophic oil spill is exacerbated by the increased international tanker traffic passing close to the western boundary of the park. The local capacity for assessment and management of any potential oil spill is very limited.

Pollution of marine waters. In addition to the risk of pollution from an oil spill, the park’s waters are vulnerable to other external sources of pollution, including the waters of the Senegal River (which carries agricultural runoff and other pollutants), and mining effluent in underground aquifers linked to the Taziast gold mine (60 km away). Some solid waste material – such as plastics and micro-filament fishing nets – are accumulating in the park, and causing an unknown amount of damage through ingestion by marine life and accidental ‘entanglement’ of birds.

Impact of global climate change. Global warming is responsible for rising sea levels, which are likely to have a direct effect on the extensive shallows of Banc d’Arguin National Park, where small wading birds aggregate. It is not clear how rising sea levels, tides and sediments are interacting, but if important foraging areas are submerged this is likely to have far-reaching impacts on bird populations all along the East Atlantic Flyway as far as Icelend and Siberia. The entire ecosystem depends on the East Atlantic upwelling and currents, which may also be affected by future climate change. Nesting colonies of the locally-endemic sub-species of spoonbill have suffered a decline in the reproductive success in recent years attributed to rising sea levels and frequent flooding. This has prompted park management to artificially raise their nesting sites on the island of Nair.

Impacts of tourism. Although tourist numbers are still very low, the impact of off-road driving, and poor litter and waste disposal in such a fragile desert environment is potentially significant. The park is already riddled with off-road tracks and there is no signage to warn drivers that they are in a national park (where off-road driving is prohibited). A new city (Chami) is under development close to the park boundary and when it becomes populated, there may be an increasing demand for beach tourism in the park, which will bring further management demands.

Infrastructure development. Banc d’Arguin National Park has a number of Imragen fishing villages along its coast, and some non-traditional infrastructure developments are taking place, particularly in the southern-most settlement of Mamghar. A new road was constructed through the park to this settlement, destroying Neolithic shell mounds (and probably causing other environmental impacts) before an Environmental Impact Assessment (EIA) was belatedly conducted. Other developments at Mamghar, including a small wind park, ice factories and desalinization plants have been completed without an EIA. There are also plans for a high-voltage electricity line along the Nouakchott-Nouadhibou road which could have negative impacts on the park’s larger birds.

Mining. Although there are no plans to mine within the park, mining operations may be expanded near the park boundary at Taziast gold mine, Tanoudert area and Cap Blanc iron ore plant. These developments are subject to EIA, but there are concerns over potentially serious impacts on the park related to pollution, water use and habitat destruction.

Development of marine aquaculture. There has been a long-standing proposal to develop a marine aquaculture project outside the park in the Cap Blanc area. The potential impact of such an initiative has not been assessed but it might affect the nearby Mediterranean Monk Seal colony and an area of the park that would potentially be incorporated into the world heritage site at some later time (when international borders are settled).