EXPLORE UGANDA’S BWINDI IMPENETRABLE NATIONAL PARK with this slideshow, check the location map and get all the facts and information below. 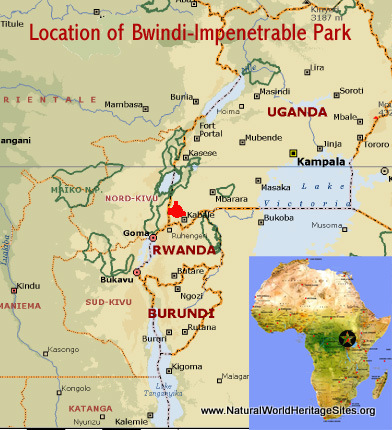 Values: Located in rugged uplands on the eastern flank of the Albertine Rift, Bwindi Impenetrable National Park is a densely forested park covering a wide range of altitude and known for being home to half the world’s mountain gorillas, as well as other exceptional biodiversity. Many species are endemic to the Albertine Rift, surviving in just a few highland forests on either side of the valley in this part of central Africa. More than 160 species of trees, 100 species of ferns, 350 birds and over 200 butterflies have been recorded, many of them internationally endangered species. A comprehensive review of the world heritage values of Bwindi Impenetrable Forest is provided below, together with details of the area’s conservation status and the threats it faces.

Mountain gorillas and other threatened mammals: Bwindi is home to about 400 (45%) of the world’s mountain gorillas, and other rare and endangered mammals, including elephants, chimpanzee and l’Hoests monkey. The property has an unusually rich small mammal fauna with 47 species of rodents, 20 shrews, and numerous bats, at least four of which are rare Albertine Rift endemics.

Rich montane flora and fauna: The park has one of the richest montane floras of any site in Africa, including many endemic species. At least 324 species of trees and shrubs have been recorded, as well as 104 species of ferns. For all major taxonomic groups, available information indicates unusually high total species counts for an area of this size. There are, for example, at least 1,000 known species of flowering plants, 120 species of mammals, 348 species of birds and 310 species of butterflies represented in an area of just 321 km2.

Bwindi Impenetrable National Park is one of the most diverse sites in Africa , supporting a particularly high proportion of Albertine Rift endemics (species whose worldwide distribution is restricted to the forests on either side of the western (Albertine) branch of Africa’s Rift Valley)

Occurrence of Albertine Rift endemic species: Although knowledge of the site’s biodiversity is far from complete, most groups of flora and fauna exhibit high levels of endemism. Eleven (41%) of the 27 known amphibians are endemic to the Albertine Rift, as well as 8 of the known 310 species of butterfly and nine (64%) of the 14 recorded species of snakes.

Diversity of co-evolving habitats: There is an exceptional diversity of habitats on account of the range of altitude (1,190 to 2,560m), equatorial location and high rainfall. These cover the complete transition from lowland to montane forest, with some notable swamps and a small grove of bamboo at the highest elevations.

CONSERVATION STATUS AND PROSPECTS: Bwindi is a relatively small, ecologically- isolated island of Afro-montane forest in one of the most densely populated parts of Africa. As such it faces enormous pressure from surrounding communities, which have traditionally used the forest’s resources but are now prevented from doing so. Conflict over resource access rights remains an issue, but the park authorities have successfully developed a well-resourced management programme that successfully addresses the key challenges, combining the fundamental need for strong protection with substantial income generation from gorilla-based tourism, and significant benefits for local people. If these management interventions can be sustained and strengthened, the outlook for the Bwindi-Impenetrable Forest, its mountain gorillas and other outstanding values seems assured.

MANAGEMENT EFFECTIVENESS: Protection and management of the area has been considerably strengthened since it became a national park in 1991 and timber harvesting was stopped. About half the park is now maintained as a wilderness zone (largely free of human activity); with a quarter designated for gorilla-based tourism and 20% managed for sustainable use of non-timber forest products by local communities. Despite the challenges of its situation as an ecological island in one of the most densely populated parts of the continent, the park has developed a strong integrated management programme that successfully combines law enforcement, lucrative gorilla-based tourism, sustainable finance and a strong programme of community-support activities (partially funded through a Trust Fund endowment).

REVIEW OF THREATS: The following issues represent specific threats to the ecology, conservation and values of the Bwindi-Impenetrable Forest world heritage site.

Interference with mountain gorillas: Whilst habituation of mountain gorillas for tourism brings enormous economic benefits, it also puts them at risk of disease transmission from human visitors, and exposes them to the threat of being killed easily (for example, by those who may not benefit directly from gorilla tourism and resent the sacrifices being made by local people denied access to other forest resources; or by ‘dealers’ wanting to sell gorilla babies or body parts on international markets). Gorillas may also suffer disturbance from the activities of local people taking forest produce in the designated ‘integrated resource use zones’ around the edge of the forest, and tend to avoid using such areas, thus reducing the area of suitable habitat available to them.

Conflict over community resource access rights: Prior to the change of status from forest reserve to national park in 1991, local people had unrestricted access to ‘minor forest produce’ for their own personal domestic use, and many people were employed in ‘sustainable timber harvesting’ using traditional pit-sawing methods under forestry department supervision. The granting of national park status was accompanied by an initial ban on all consumptive use of resources, followed by a gradual relaxation of this ban to restore local community access rights within designated zones under the terms of agreements that are formally negotiated with each forest-edge community. By 2007, 18% of the total area of the park was designated for community use of specified (non-timber) forest resources under these agreements, with the intention of increasing this to 20%. However, the denial of traditional user access rights, without compensation, that accompanied the re-designation of the property as a national park has caused enormous, deep-rooted resentment and remains a source of tension and conflict between the park authorities and local communities.

Poaching: Low-level subsistence hunting has been a way of life for the local Bakiga people and (especially) the forest-dwelling pygmy Batwa community for centuries. Its impact has been limited due to the extremely rugged terrain and relatively low human population densities around the forest, at least in the past. Hunting is now illegal, but there is still significant hunting pressure, generally using wire snares to trap animals.

Poor boundary configuration: The property comprises two tracts of forest linked by a narrow ‘neck’ (which has a public road running through it), with a correspondingly high boundary:area ratio. This means that most of the forest is within easy walking distance (an hour or two) of the forest boundary and at risk from ‘edge effects’. The narrow neck seems to have (so far) prevented mountain gorillas from using the smaller tract of forest, which appears to offer suitable habitat.

Ecological isolation and small size: The property is an ‘ecological island’ of forest in one of the most densely populated (and intensively cultivated) parts of Africa. Local population densities around the forest edge are typically 160-320 people per km2, and the forest has been progressively isolated from other protected forests along the Albertine Rift through the clearing of forest remnants in the agricultural areas. The small size of the forest (320 km2) means that maintaining viable populations of larger species – such as elephants, gorillas, chimpanzees, birds of prey – may not be possible without sustained intervention.

Agricultural encroachment: Although the park boundary is clearly demarcated, there have always been periodic instances of encroachment by neighbouring cultivators.

Buffer Zone degradation: The boundaries of the Bwindi Impenetrable Forest provide a classic example of a ‘hard edge’ with surrounding lands cleared of native trees (partially replaced with Eucalyptus and other fast-growing exotics), while the protected forest remains (quite) intact on the other side of the boundary line. The boundary is well maintained and marked with concrete beacons and a line of live marker trees. The ecological denudation of areas outside the forest means that it cannot serve as an effective ‘buffer zone’ in which forest species can forage and/or maintain part of their population.

Unsustainable use of minor forest produce: Minor forest produce, notably bamboo, natural fibres, mushrooms, honey and the like, make an important contribution to local livelihoods and these products may now be taken from designated zones under the terms of community-use Memoranda of Understanding. Off-take is monitored by park rangers, but there are few data on which to base sustainability decisions and harvesting quotas.

Human-wildlife conflict: Crop damage around the forest edge remains a source of conflict between park authorities and local farmers, with crop raiding by elephants, gorillas, chimps, baboons and other primates, as well as bushpigs, antelope and birds. This threat is exacerbated by the long boundary (relative to area protected), and high population pressure all along it. Crop raiding influences the attitudes of communities negatively towards conservation, reduces the ability of families to feed themselves and leads to poaching and snaring.

Invasive alien species: The occurrence of alien exotic vegetation is generally limited to areas around the edge of the forest and affects no more than 2% of the property.

Fire: Fire can cause localized habitat destruction when conditions are exceptionally dry, especially along the forest edge where fires can spread from neighbouring agricultural lands. However, the wet closed canopy forest is generally resilient to the outbreak of fire.

Mountain gorillas are increasingly becoming accustomed to people from an early age as more gorilla groups are habituated for tourism. losing their natural fear of humans carries substantial risk for their long-term protection

Impacts of tourism: Tourism numbers are relatively low and most tourist activities are centered on gorilla tourism. Visitors are generally taken into the forest in groups of 6 to track and locate a known group of gorillas and spend an hour with them. Controls on tourist visits to gorillas are tight, with each group visited once daily, and fees are substantial (they have been increased repeatedly and stood at US$ 500 per person in 2011). There is strong pressure from tourism operators to increase the number of gorilla groups that are habituated and ten of the known 36 groups (involving 168/400 individual gorillas) had been habituated by 2012. Habituation of gorillas means that they become fearless of encounters with people – making them (1) vulnerable to those who might want to kill them, (2) more inclined to venture outside the park to raid crops and (3) susceptible to transmission of human disease.

Rural access road through the park: An un-surfaced rural access road cuts through the highest reaches of the park, along its boundary and through the narrow ‘neck’ that connects the two parts of the forest. This seems to serve as a barrier to gorilla dispersal and use of habitat, and may also affect other species. It is frequented by local people on foot, bicycle and car, and used as a main through route for lorries transporting goods from the regional capital at Kabale to villages lying to the north of the forest.

Climate change: Global warming is raising temperatures and is expected to cause a general shift of vegetation zones to higher elevations. This will increase the area of the forest suitable for lowland forest species and reduce its suitability for higher-elevation montane species (which tend to be the rarer ones). The small grove of bamboo which currently exists at the highest point may no longer survive under warmer conditions.

The slideshow provides a comprehensive overview of Uganda’s Bwindi Impenetrable National Park showing the area’s spectacular Rift Valley forested landscapes and wildlife habitats. It shows many of the plants and animals, including species endemic to Africa’s western (Albertine) rift valley as well as mountain gorillas and other threatened species. The protected forest is an ecological island of natural habitat in a very intensively farmed landscape and some the conservation management issues and local community livelihoods are illustrated.