EXPLORE SOUTH AFRICA’S CAPE FLORAL REGION PROTECTED AREAS with this slideshow, check the location map and get all the facts and information below. 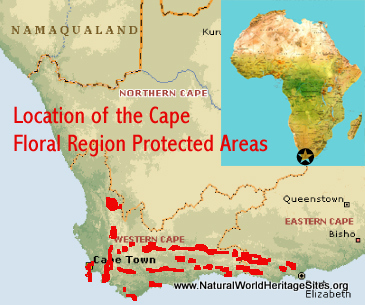 Values: The Cape Floral Region has been called the world’s hottest hot-spot for plant diversity and endemism. Its flora is so diverse and unique that it warrants classification as one the world’s six principal floristic regions. In less than 0.38% of the area of Africa it has nearly 20% of the continent’s flora and five of its twelve endemic families. Although the entire floral region is only 90,000 km2 in extent, it is home to 8,996 plant species and 988 genera, with 32% of its species found nowhere else in the world. Following its extension in 2015 the world heritage site comprises a complex ‘archipelago’ of 157 component parts (land parcels) in 13 ‘clusters’ encompassing as much as possible of this floristic diversity and the range of ecological conditions, soil types, rainfall regimes, and elevation found in the region. It stretches from the Cederberg to the Cape of Good Hope and includes the Boland Mountains, De Hoop Nature Reserve, the Swartberg mountains and eastwards to Baviaanskloof.

REVIEW OF WORLD HERITAGE VALUES: According to IUCN’s Conservation Outlook Assessment (2014), the specific attributes which qualify the Cape Floral Region Protected Areas for world heritage status can be summarised as follows:

Outstanding diversity and endemism of flora. TheCape Floral Region is one of the richest areas for plants in the world, identified as one of the world’s 18 ‘biodiversity hot spots’. It represents less than 0.4% of the area of Africa but is home to nearly 20% of the continent’s flora. Of the known 8,996 plant species in the region some 69% are endemic, with 1,435 species identified as threatened.

Ongoing ecological and biological processes. The world heritage site is recognised for the importance of the ecological and biological processes associated with the evolution of the unique Fynbos biome (the technical term used to describe the distinctive heath vegetation that characterises the Cape Floral Region). The biome is a centre of active speciation in which plants have experienced exceptionally high rates of adaptive radiation, producing many unique (endemic) varieties and species.Of particular scientific interest are the reproductive strategies of the plants, including their adaptive responses to fire and patterns of seed dispersal by insects. Their pollination biology and nutrient cycling are other distinctive ecological processes that characterise the Fynbos biome.

CONSERVATION STATUS AND PROSPECTS: Although the fynbos vegetation that characterises the Cape Floral Region is highly threatened outside protected areas, the conservation status of the world heritage site is good, particularly given accelerated management efforts to control invasive alien plants and wild fires. Invasive alien plants are being controlled through use of biological control agents as well as mechanical removal methods, and these complementary approaches are proving effective. The possible future impacts of climate change are unknown, but the site should be quite resilient to change on account of its wide geographical spread and the altitudinal range of the areas protected.

MANAGEMENT EFFECTIVENESS: The protected area components of this serial world heritage site are individually rather small and vulnerable to disturbance and influences originating beyond their boundaries. This makes management particularly challenging, especially when it comes to control of invasive alien plants (which infest the wider landscape) and fire (which often spreads into a protected area from beyond its boundaries). The management authorities are relatively well resourced (compared with others in Africa) and management programmes quite effectively implemented, although much more could be done to control invasive vegetation if budgets were increased. Importantly, the boundaries of the reserves are well respected and there are rarely problems of encroachment or illegal grazing of livestock.

Invasive Alien Species. Alien plants pose the most severe threat to the continued existence of Fynbos ecosystems. Alien species have invaded large areas of the site (particularly its coastal habitats), displacing the native species. Species that depend on seed dispersal by ants and termites are especially threatened, as the alien Argentine ant seems to be displacing the native seed-dispersing species.

Fire. Although fynbos is adapted to fire, burningtoo frequently prevents plants from reaching seedling age, threatening regeneration. The risk of fire increases dramatically with the occurrence of invasive alien plants (many of which are large and easily burnt, resulting in hot fires). In addition, fires are increasingly started by people – accidentally or deliberately – and the incidence of wild-fires has greatly increased within the CapePeninsula (including TableMountainNational Park) due to the proximity of Cape Town.

Climate change. The extent of any impact from a changing climate is unknown. Warmer temperatures are likely to result in longer drier periods, increasing the threat of damaging fires. Furthermore, climate change may stimulate the growth of invasive woody plants, displacing the natural fynbos vegetation while increasing the risk of fire. Some predictions point to a possible 3.7oC temperature rise and 10-30% decrease in winter rainfall, the combined effect of which could be a two-thirds reduction in the geographical extent of the fynbos biome accompanied by extinction of as many as half its unique characteristic species. The wide geographical spread and altitudinal range of the protected areas will mitigate this threat to some extent, but the long-term prospects for conservation of fynbos are far from certain.

Expansion of urban areas and human impacts. The human population around the Cape Floral Region is growing rapidly, creating ever-increasing pressure on the area’s natural resources. The intensification of land-use in areas bordering each protected area will result in unpredictable knock-on effects, whilst increasing numbers of visitors will create demands for new infrastructure, access and facilities within the protected areas.

The slideshow provides a comprehensive overview of South Africa’s Cape Floral Region Protected Areas, showing the area’s spectacular fynbos, mountain and coastal landscapes, wildlife habitats, endemic and threatened animals and plants. It highlights some of the conservation management issues, and illustrates local community livelihoods and some of the facilities and typical visitor experiences in a number of the parks and reserves that are included in the world heritage site.