You are here: Home1 / All featured sites2 / Cerrado Protected Areas

EXPLORE BRAZIL’S CERRADO PROTECTED AREAS with this slideshow, check the location map and get all the facts and information below. 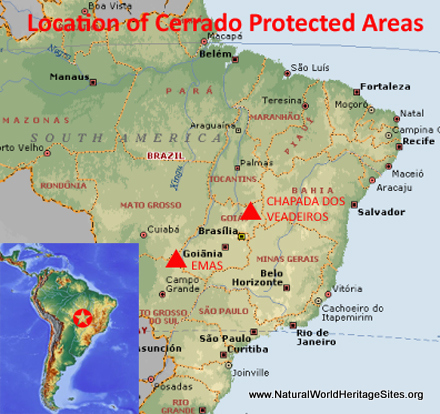 Location and Values: Brazil’s Cerrado Protected Areas of Chapada dos Veadeiros and Emas National Parks cover two of the last remaining examples of undisturbed tropical savanna habitat in South America. This is one of the oldest tropical ecosystems on Earth, with correspondingly high biodiversity. The two areas protect many of the regions endemic, rare and endangered species of plants and animals including giant anteater, maned wolf, jaguar and South America’s larest bird, the rhea.

Conservation Status and Prospects. According to IUCN’s recent Conservation Outlook Assessment there is significant concern over the conservation status of this site. The IUCN report notes that the ‘conservation of the site was seriously impacted when 72% of the Chapada dos Veadeiros National Park was excised. Efforts have been undertaken to restore protection to all parts of the site but until the situation is resolved, there remains serious concern about whether the conservation of the site’s ‘outstanding universal value’ is guaranteed. While other threats to the property, which include fires, agricultural activities and limited tourism, are relatively low, the combined future threats of biological isolation and potential major impacts of climate change constitute a high threat to the site. Fire is a natural phenomenon of the Cerrado but has an increased frequency due to human activities. It certainly has had a negative influence on the site’s values but since Cerrado’s biodiversity has evolved in the presence of fire, it tolerates a certain degree of fire-related disturbance.’

The photos in this slideshow are intended to ‘tell the story’ Cerrado Protected Areas of Chapada dos Veadeiros and Emas National Parks, showing the area’s landscapes, plants and animals, people, threats and conservation needs. It includes recent photographs from a visit to the Chapada dos Veadeiros National Park. Only a small area of the park is open to the public, but the photos provide a good overall impression of the woodland and savanna habitats, waterfalls, plants and a few of the animals that occur in the region. This page of the website is still under development and a more detailed description of the various aspects of the site which are illustrated in the slideshow will be included in due course – so please come back again soon!