You are here: Home1 / All featured sites2 / Danube Delta

EXPLORE THE DANUBE DELTA with this slideshow, check the location map and get all the facts and information below. 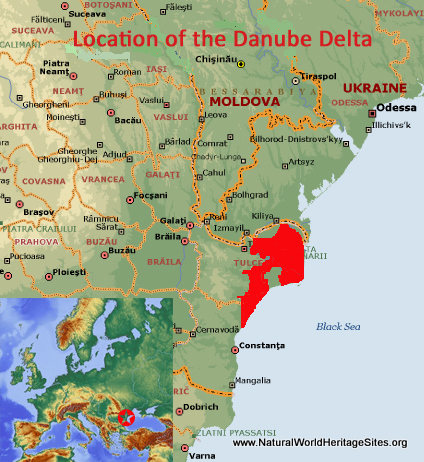 Location and Values: The Danube Delta is located on the western shores of the Black Sea, and is Europe’s best preserved and second largest delta (after the Volga).  The delta covers 6,250 km2, with about half of this area designated as world heritage.  It includes the largest continuous marshland in Europe and the most extensive reed beds (1,700 km2) in the world, providing vital habitat for migratory birds on the flyway between east-central Europe and the Middle East.  Some 312 species of birds have been recorded, with 176 of these breeding at the site.  Over-wintering waterfowl counts from 1988 to 1991 recorded up to 500,000 white-fronted geese, 963,000 teal, 179,000 mallard and 174,000 pochard, as well as numerous other species.  The delta is also very important for fish with 75 species recorded, including 45 freshwater species and three critically endangered species of sturgeon.

Conservation Status and Prospects.  According to IUCN’s Conservation Outlook Assessment (2017) the conservation status of the Danube Delta is ‘good, with some concerns’. The IUCN report notes that ‘the site’s unique features as the largest continuous marshland in Europe and the second-largest delta remain well-preserved overall, but the current status of its biodiversity values (particularly avifauna) is unclear. Concerns exist about populations of some species and ongoing high threats from pollution, infrastructure development, illegal human activities and invasive species. Potential threats include those related to climate change. Overall, the management of the site is mostly effective. However, some concerns remain with regards to sustainable long-term financing, as well as enforcement, prevention of illegal activities and some other management areas. ’

The slideshow features a series of photos by Ian Francis covering the main habitats and many of the widespread bird species occurring in the Danube Delta.  The delta has three main ecological zones:  a fluvial zone in the upper part of the delta, with sandy levees and small densely vegetated lakes; a transition zone with less sedimentation and larger lakes; and a marine zone with large brackish lagoons and sand-dune barrier beach complexes.  There are three main waterways through the delta and these serve as important commercial shipping lanes as well as channels for large sight-seeing vessels.  Along these channels an estimated 12-16,000 people are resident, making low-intensity use of natural resources in a way that is fairly well integrated with natural resource protection and sustainable use through fishing, cattle keeping, small-scale agriculture and harvesting of reeds and other plant products. The world heritage site covers a complex mosaic of land management units with 505 km2 (16% of the total area) within 18 strictly protected areas and the remainder under various semi-natural management regimes, often involving systems of dykes to manage flooding within agricultural, fisheries and forestry polders.