EXPLORE SENEGAL’S DJOUDJ NATIONAL BIRD SANCTUARY with this slideshow, check the location map and get all the facts and information below. 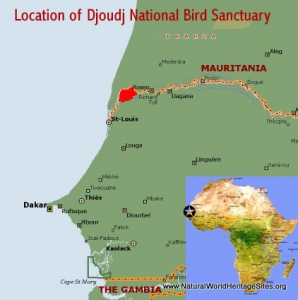 Values: The Djoudj National Bird Sanctuary is a wetland in the Senegal river delta, which serves as an over-wintering site for vast numbers of waterfowl and other Palaearctic migrant birds. Historically, the site was subject to alternating cycles of seasonal flooding with fresh water from the Senegal River, followed by an influx of salt water from the ocean during the dry season. This hydrological regime has been altered with the construction of dams both upstream and downstream of the sanctuary. A seasonal freshwater flood is now provided by release of impounded water, but the saltwater flooding no longer occurs. Waterbird counts in 1998 (after the dams were completed) revealed half a million individuals of just the top four species – garganey (222,000), pintail (120,000), ruff (120,000) and white-faced tree duck (36,000).

REVIEW OF WORLD HERITAGE VALUES: According to IUCN’s Conservation Outlook Assessment (2014), the specific attributes which qualify the Djoudj National Bird Sanctuary for world heritage status can be summarised as follows:

CONSERVATION STATUS AND PROSPECTS: The nature of the Djoudj wetlands has changed fundamentally since the completion of the Diama Dam across the Senegal River in 1986. Located about 20 km downstream of Djoudj, this dam creates a large freshwater reservoir, while preventing penetration of salt water into the delta during the dry season. The wetlands of the Djoudj world heritage site would have been flooded by this reservoir were they not protected by a system of high embankments and sluice gates. The Outstanding Universal Values of the site are now maintained artificially with seasonal flooding, mimicking the natural system, managed by opening the sluice gates for 3 months (during the July-September rains), then allowing the system to gradually dry out during the rest of the year. As long as this artificial management system is maintained the world heritage values can be sustained, although the biodiversity and wetland ecology has been partially degraded. The prospect of further dams on the Senegal River and use of water upstream is a cause for concern, as this may deprive Djoudj of its seasonal replenishment. It can be anticipated that the release of freshwater into the Djoudj wetlands will be increasingly in direct competition with alternative demands for water for irrigation, rice production and urban use, especially during periodic droughts.

MANAGEMENT EFFECTIVENESS: The site has undergone a serious crisis as a result of changing hydrology associated with the Diama Dam which led to its inclusion on the List of World Heritage in Danger (2000-06). Although Djoudj is no longer on the Danger list, site protection and management still needs to be significantly improved to ensure preservation of the site’s important ecological values. A key priority is the removal of invasive plant species, while sedimentation and erosion require close monitoring. Human activities within the site (e.g. livestock grazing and poaching) and outside (use of chemical fertilizers) are significant further threats that require attention. Management programmes need to address deficiencies in staff training, defining the extent of the buffer zone, precise monitoring of species, financing of non-staff costs, use of monitoring and research work in management, and trans-border cooperation with the Mauritanian authorities who manage adjacent areas of the delta.

Siltation of wetlands and water bodies. Several of the site’s most important water bodies – the Great Lake, Manatee Lake, Thiegue wetland and Crocodile Canal – have suffered significant siltation in recent years due to the hydrological changes associated with the Diama Dam and the elimination of occasional events to ‘flush out’ excess sediment. There is a significant risk that these areas will undergo progressive change, altering their ecology and their ability to sustain present populations of migratory waterbirds.

Competition for water. With ever-increasing demands for water from the Senegal River from all the riparian states (Mali, Mauritania and Senegal) there is likely to be growing pressure to reduce the amount that is released into the Djoudj. This will inevitably have knock-on effects for the ecology of the natural wetlands and reduce their ability to sustain waterfowl populations.

Ineffective water management. Related to the problems of siltation and competition for water, it is important to recognise that the artificial management of ‘flooding cycles’ is dependent on the proper management and maintenance of related infrastructure including the canals, embankments and sluice gates that are key to the survival of the Djoudj wetland ecosystem. If this management becomes lax and ineffective the entire wetland is at risk.

Invasive Alien Species. The hydrological changes brought about by the construction of Diama Dam and related embankments and sluices favoured the proliferation of invasive species, including most notably the reed, Typha australis and Tamarix senegalensis. Measures have been taken to control these invasive species but these and other exotic species remain a key threat to the ecology and values of the site.

Grazing of domesticated animals. The grazing of domestic animals inside the site is one of the major pressures (30,890 cattle, sheep and goats were counted in 2010). An increase in the local population living near the site and persistence of traditional transhumance lifestyles means that herds of domestic animals are constantly brought into the sanctuary where they destroy the vegetation and disturb waterfowl feeding areas.

Subsistence hunting. Although illegal hunting and fishing are practiced within the site these activities do not seem to constitute very significant threats

Water Pollution. Use of chemicals in rice fields and market gardens close to the park is a source of water pollution. This does not seem to have become a major threat, but vigilance is required to monitor possible impacts.