EXPLORE El Pinacate and Gran Desierto de Altar Biosphere Reserve with this slideshow, check the location map and get all the facts and information below. 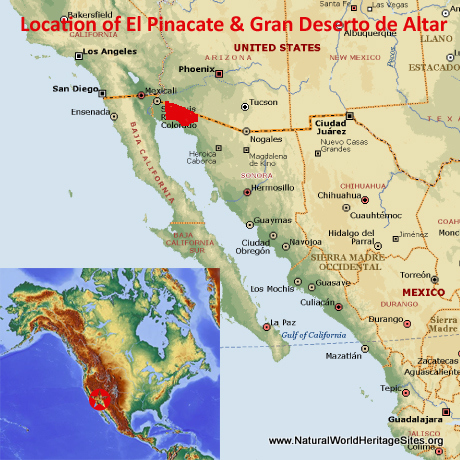 Location and Values: The El Pinacate and Gran Desierto de Altar Biosphere Reserve is located in the Sonoran Desert along Mexico’s northern border with the United States.  The Sonora is one of North America’s four great deserts (the others being the Chihuahuan, Mojave and Great Basin Deserts), and the world heritage site encompasses an exceptional combination of Sonoran Desert features.  It includes North America’s largest field of active sand dunes, and a dormant volcanic shield of perfectly-formed, circular steam-blast (Maar) craters, lava flows and other volcanic features. The dramatic contrast between the golden sands of the Gran Desierto de Altar and the austere beauty of the Pinacate Volcanic Shield with its red and black lava flows, craters, cinder cones and lava tubes creates a landscape of exceptional scenic value.  In addition to its scenic and geological attributes, the site is listed for its exceptional biodiversity values.  Compared with other desert areas, the site supports a surprisingly high diversity of plant and animal species (recognizing that deserts are generally rather species-poor relative to other biomes).  These include 540 documented species of higher plants, 44 mammals, 200 birds and 40 species of reptile, including several endemic to the Sonoran Desert or known only from this particular site.

Conservation Status and Prospects. According to IUCN’s Conservation Outlook Assessment (2017) the conservation status of the El Pinacate and Gran Desierto de Altar Biosphere Reserve is ‘good, with some concerns’. The IUCN report notes that the harsh desert conditions and inhospitable terrain provide a high degree of natural protection to the site, while the reserve’s large size and position within a larger complex of protected areas ensures that it has a high degree of natural ecological resilience. However, there are a number of significant threats, including (1) invasive species, (2) climate change, (3) increasing water consumption in the broader region, (4) mining concessions overlapping with the property and plans for salt extraction in its vicinity, and (5) security infrastructure along the international border between Mexico and the USA (which is affecting animal movements and landscape connectivity). The most significant of these long-term threats are alien invasive species and climate change, both of which could lead to dramatic changes in the desert ecosystem. The IUCN report notes that other parts of the Sonoran Desert have already suffered from the spread of non-native grasses resulting in increased fire frequency and intensity and altering the entire desert ecosystem.

The slideshow ‘tells the story’ of El Pinacate and Gran Desierto de Altar Biosphere Reserve with a portfolio of photos by Peter Howard from a visit in January 2020.  It illustrates the landscape and geological features of this outstanding place, together with some of the typical plants and animals.  Visitor access is extremely limited and the slideshow illustrates only those areas that are accessible to the public.  At the time of this visit, the main self-drive (76 km) scenic loop road through the crater area was closed, so the only access into the interior of the reserve was along the 7km access road to the Schuk Toak Visitor Centre.   The slideshow starts with photos of the desert scenery along this road, and some recent lava flows nearby.  It continues by showing the impressive visitor centre building and some of the exhibits, including aerial views of several of the spectacular volcanic craters (which can also be appreciated from Google satellite imagery, see link below).

From the visitor centre there are a number of short self-guided interpretative trails, and a longer trail into some of the higher dunes at the edge of the Altar desert.  The slideshow features this walk into the dunes, showing some of the plant and animal life that can be seen along the way.  Unfortunately, the trail is only open during the mid-day period (for monitoring and safety reasons), so photographic opportunities are limited to the harsh lighting conditions at mid-day.  Nevertheless, the dune formations and contrasting granite mountains are an impressive sight at any time.

The slideshow continues with a series of photos taken along the main road that skirts the eastern and northern boundaries of the reserve, passing the biological research station, where the (closed) Ruta Crateres (crater scenic drive) starts.  The north-eastern section of the reserve is interesting, as here the size and diversity of desert cacti is at its best.  Some of the prominent species are featured, with some impressive landscapes dominated by columnar cactus species.  Amongst the desert vegetation in this area, visitors may be lucky to spot small groups of the threatened endemic (sub-species) of Sonoran Pronghorn.