You are here: Home1 / All featured sites2 / Ennedi Massif

EXPLORE CHAD’S ENNEDI MASSIF with this slideshow, check the location map and get all the facts and information below. 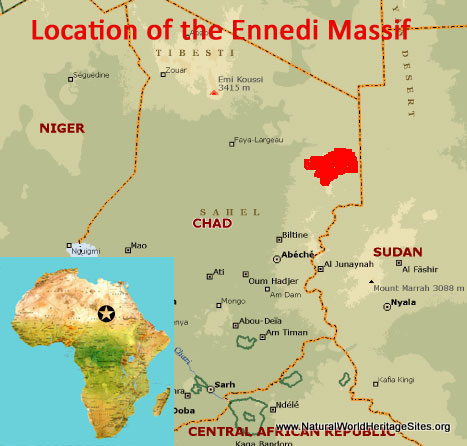 Important Values: The Ennedi is a vast sandstone massif, covering some 30,000 km2 on the southern fringes of the Sahara Desert in eastern Chad. It is one of six major mountain blocks in the Sahara, all of which have been subject to major fluctuations in climate over millennia. The story of these changes is recorded in the area’s rich rock art, and evidenced by relict populations of plants and animals that survive in sheltered pockets in an otherwise desiccated environment. The scenery is spectacular, with desert landscapes punctuated by extraordinary eroded sandstone sculptures, deep canyons and vibrant green hidden oases.

The slideshow features a relatively small part of this very extensive world heritage site, concentrating on the more accessible areas in the south-west of the site. It begins with one of the classic sandstone arches, situated at Terkei, where there is also a well-know concentration of rock art. Sadly, one of the best-known panels (which appears in Coulson & Campbell’s book on African Rock Art and shows a group of women in ankle-length dresses) has been deliberately defaced in recent years, illustrating the vulnerability of the rock-art and need for more effective protection. Much of the rock art is found in smaller concealed alcoves and caves, and it takes time for the interested observer to explore and discover its diversity – indeed, much of it remains undocumented in more remote parts of the massif. From Terkei the slideshow moves to an isolated sandstone outcrop slightly further north, known as ‘The Castle’, with its spectacular wind-blown towers flanked by golden sand dunes. The sandstone outcrops are separated from one another by sand-filled ergs (valleys), and there are far-reaching views across the area from high on the ‘Castle’ ramparts. Many of the area’s most distinctive sandstone outcrops have been given names, and the slideshow features ‘Les Trois Messieurs’, three great columns standing together and a number of other such outcrops from the north of Terkei. In the same area are further panels of rock-art showing distinctive horsemen, riding in groups (their steeds illustrated in elongated form with legs outstretched) as well as archaeological evidence of past occupation such as ancient grinding stones. The Ennedi Massif is still a ‘living landscape’, occupied by pastoralists with their camels, donkeys and goats, and much of the more conspicuous wildlife species have disappeared as a result of hunting. A fennec fox is shown, one of the few larger mammals that might be encountered on a visit to the area. There are a few oases scattered throughout the area and these serve as busy gathering points for herdsmen and their livestock – the Tokou well is shown, as well as features of the surrounding area. The Ennedi shelters various species of plants and animals that would normally require a moister environment, but survive here as ‘relict’ populations. As an example, near the Tokou well stands the only Acacia albida tree known in the Ennedi. The slideshow ends with another of the area’s classic sandstone arches, known as ‘Naplolean’s cap’.