EXPLORE THE USA’S GRAND CANYON WORLD HERITAGE SITE with this slideshow, check the location map and get all the facts and information below. 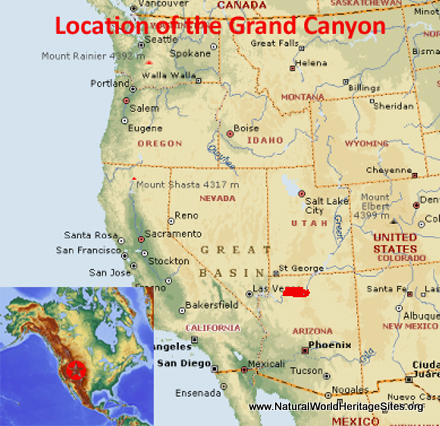 Location and Values: The Grand Canyon is among the earth’s most spectacular geological features. It appears as a vast chasm in the Earth’s crust, 1.5 km deep, carved by the erosive force of the Colorado River over 6 million years. From the canyon rim the visitor looks down on massive buttes, spires, mesas and temples, while the exposed horizontal strata retrace geological history over 2 billion years, revealing Earth’s four major geologic eras.

Conservation Status and Prospects. According to IUCN’s recent Conservation Outlook Assessment the conservation status of the Grand Canyon is ‘good with some concerns’. The IUCN report notes that ‘overall the state of world heritage values is stable or declining slightly, with some key areas of concern and potential deterioration in the next decade. These include: uranium mining; bison, elk, and non-native fish increases; development in the park at the Little Colorado River area and at Quartermaster Canyon; increases in overflights; reservoir equalization flows between Lake Powell and Lake Mead; management capacity; and major developments and groundwater extraction at Tusayan. Opportunities exist for correction of all of these threats. The population trends of some species are in decline and are beginning to warrant concern that the park and surrounding areas will not eventually serve the needs of the park. Key concerns include external tourism development, internal tourism development, management of the Colorado River, restoration of fire in a drought cycle, potential for mining, bison management, and funding for operations and infrastructure.’

The photos in this slideshow are intended to ‘tell the story’ of the Grand Canyon National Park, showing the diversity and scale of the geological features, as well as some of the plants and animals of the desert environment in which the Grand Canyon located. They include the most popular areas along the southern rim, the Kaibab hiking trail that descends through the Canyon to the Colorado River, and points on the less-popular northern rim, including Bright Angel Point, Point Imperial and Cape Royal.