You are here: Home1 / All featured sites2 / Huascarán National Park

EXPLORE HUASCARÁN NATIONAL PARK with this slideshow, check the location map and get all the facts and information below. 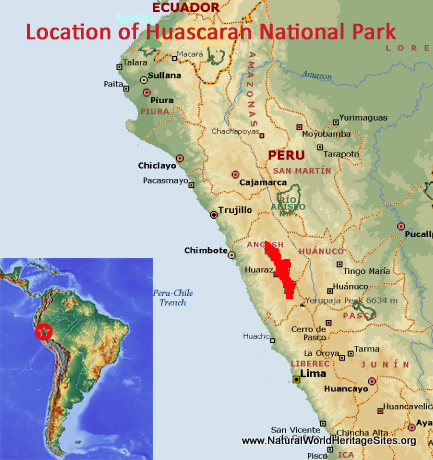 Location and Values: Huascarán National Park is located in the high Andes of northern Peru, and covers most of the Cordillera Blanca, the world’s highest tropical mountain range.  It is a spectacular landscape encompassing 27 peaks over 6,000m with 663 glaciers, lakes, torrential mountain streams and high plateau.  Over a quarter of the park is snow-bound, while a third is tundra and another third is paramo (high plateau grasslands, or puna), with small areas of wetlands and tropical montane forest in the valleys. The park protects some particularly notable plants and animals, including the’ Queen of the Andes’ (a bromeliad plant, Puya raymondii) which has the largest flower-spike in the world (9-10m high).  Vicuna, spectacled bears, cougar and Andean condors are amongst the park’s rare and threatened animals.

The park was inscribed on the world heritage list under criterion (viii) recognizing its geological complexity.  Many of its rocks are of sedimentary origin and have been uplifted, folded and faulted by complex tectonic activity associated with the building of the Andes through subduction of the Pacific oceanic crust under the South American plate.  This process also gives rise to volcanic activity along this part of the Pacific Ring of Fire, and the area is subject to continuing seismic activity.

Conservation Status and Prospects.  According to IUCN’s Conservation Outlook Assessment (2017) the conservation status of the Huascarán National Park is ‘of significant concern’. The IUCN report notes that ‘prior to the creation of the park, traditional resource use for agriculture, livestock, mining and tourism was practiced. Over the years, such use has continued and intensified, with the result that natural attributes of the site have suffered severely. Conflicts with users of local resources are still pending resolution and implementation of the legislation and regulation of the park has been limited, despite the efforts of the State Party. The increase in human population in the buffer zone has increased the pressures on the natural resources of the park. Values ​​related to geomorphological features and geological processes remain virtually intact.’

The slideshow starts in the south of the park where there are some fine stands of Puya raymondii plants, with their enormous flower spikes.  Nearby, one of the park’s main attractions is the Pastoruri glacier, which can be reached easily on foot from the road-head.  It provides a startling example of the effects of global warming, having lost 40% of its surface area between 1995 and 2008.  The melting glacier is likely to disappear altogether within the next couple of decades, along with much of the other glacial ice throughout the park.  This will not only impact on the park’s beauty, but also affect water supplies to major horticultural businesses on the mountain slopes and valleys below the park boundary.

The bulk of the photos in the slideshow cover the four-day Santa Cruz trek which traverses the park from west to east via the Punta Union Pass (4,760m) in the northern part of the park.  It is a spectacular trek that showcases the diversity of the flora and habitats – cactuses, bromeliads, short-grass pastures and colourful wetlands – as well as stunning vistas and landscapes.  The trek passes through glacier-carved valleys up to the snowline, with emerald lakes and dazzling, jagged, snow-covered peaks.  Although most of the more iconic large mammals are difficult to spot, trekkers are likely to see a variety of Andean birds, including the Andean flicker (woodpecker), Andean goose and Puna ibis.  In the valleys, the contorted branches of the flaky-barked Quenual trees (Polylepis) contrast with the open spaces of nearby pastures, while the flowers of lupins, cactuses, and various cushion plants add a splash of colour.  The trek ends at the roadhead on the eastern side of the mountains where rural communities around the village of Vaqueria take advantage of grazing opportunities in the park, herding their stock into the mountains.  The last part of the slideshow covers the return journey by road from Vaqueria over the Portachuelo Pass (4,760m), with stunning views of Huascaran summit (6,768m) and nearby mountain giants, as well as the classic glacial U-shaped Llanganuco Valley with  its stunning blue lakes (Laguna Chinancocha and Laguna Orconcocha) and grazing alpaca.