You are here: Home1 / All featured sites2 / Ichkeul National Park

EXPLORE TUNISIA’S ICHKEUL NATIONAL PARK with this slideshow, check the location map and get all the facts and information below. 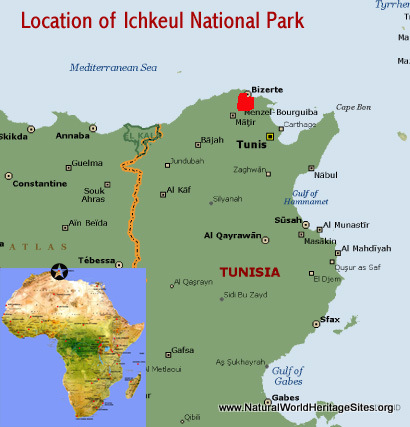 Values: Lake Ichkeul is a shallow lake with a fluctuating water level and salinity that serves as an important over-wintering site for Palaearctic migrant waterfowl. In the years preceding its listing as a world heritage site, waterfowl numbers averaged about 250,000, but this has fallen dramatically as a result of the construction of dams on three of the main rivers feeding into the lake during the 80s. Peak-season waterfowl counts reached an all-time low of around 11,000 in 2003, increasing to 35,000 in 2005 after two years of good rainfall. The vast majority of these birds (84%) belong to just three species: wigeon, pochard and coot.

REVIEW OF WORLD HERITAGE VALUES: According to IUCN’s Conservation Outlook Assessment (2014), the specific attributes which qualify IchkeulNational Park for world heritage status can be summarised as follows:

Globally important site for large numbers of palaearctic waterfowl. Ichkeul National Park contains important natural habitats that serve as an essential wintering site for an exceptional density of western Palaearctic waterfowl. In certain years, more than 300,000 ducks, geese and coots may be present at the same time. It is one of the four top over-wintering sites in the western Mediterranean.

CONSERVATION STATUS AND PROSPECTS: The conservation status of Ichkeul National Park is improving following a critical period during which it was deprived of fresh water from inflowing streams (as a result of dam construction) and became too salty to sustain the aquatic plants and other attributes essential to over-wintering waterfowl. The hydrological status of the property has improved significantly over the last 10 years (thanks in part to unusually heavy rainfall over four consecutive seasons from 2002-06) but the site remains vulnerable and recovery could be reversed by a series of low-precipitation seasons. Following construction of dams on most of the inflowing rivers and a sluice barrier across the outflow channel the hydrology of the lake is now highly controlled so the continued maintenance of its world heritage values will depend increasingly on political will and consideration of alternative uses for water.

MANAGEMENT EFFECTIVENESS: Significant effort towards effective hydrological management of Lake Ichkeul has contributed to its recovery since 2004. A management plan was developed for the National Park (with financial support from the Global Environmental Facility, GEF) in 2005-2008. There is growing recognition that sustainable management of the ecosystem cannot rely on favourable weather conditions alone, so water management protocols need to be mainstreamed, the institutional set-up strengthened, and local support in favour of conservation must be gained.

REVIEW OF CONSERVATION ISSUES AND THREATS: The following issues represent specific threats to the ecology, conservation and values of the IchkeulNational Park world heritage site.

Dam construction and use of water. This is by far the greatest long-term threat to the site, as inflowing streams are progressively dammed and water is used for irrigation and urban development. The site was included on the UNESCO’s List of World Heritage In Danger from 1996-2006 because a series of new dams on the major inflowing rivers deprived the lake of freshwater, increasing its salinity to unprecedented levels and resulting in something close to ecological collapse. During this period salinity levels rose to 73g/l, most freshwater aquatic plants died off and there was a dramatic reduction in waterfowl numbers. Partial recovery has been achieved since 2002 as a result of exceptionally high rainfall over four consecutive winters allowing a significant reduction in salinity (to 5-6g/l) and recovery of freshwater aquatic plants. Today the inflow of freshwater to the lake is largely determined by intentional release of water from the new dams, and the salinity of the lake is controlled by sluices across the outflow channel which prevents the entry of seawater during periods of low water. This artificially-managed system is allowing recovery of key ecological attributes and restoring the lake’s value as an over-wintering site for waterfowl. In the longer-term, water management will need to accommodate the possible impact of climate change (which is unpredictable, but might result in more frequent drought conditions).

Siltation. Sedimentation might eventually lead to the drying-up of the lake, but this is not considered to be a major threat to the site in the short term. High sedimentation rates have been observed over the last 30 years as deforestation and cultivation has increased in the catchment areas, but silt is likely to be deposited in the new upstream dams and impoundments (rather than flowing directly into the lake).

Grazing of domesticated animals. There is some grazing of cattle within the park (especially around Jebel Ichkeul) but this is not considered to be a significant threat to the park’s important ecological values.

Illegal fishing. This is considered to be a significant but manageable problem.

Illegal hunting. Hunting is permitted around the periphery of the park and poaching is considered a threat to the park’s wildlife.

Crop production. A certain amount of land within the park (about 800 ha in 2007, or about 6% of the park’s area) is under cultivation, but this probably has limited direct impact on the park’s core values for over-wintering waterfowl.

The slideshow provides a comprehensive overview of Tunisia’s Ichkeul National Park showing the shoreline around Lake Ichkeul with its extensive wetlands and other wildlife habitats as well as the waterfowl, ducks, coots and other characteristic plants and animals. It highlights some of the conservation management issues in managing upstream water supplies (where catchment areas have been dammed) and the use of sluice gates to manage the inflow of sea water. Local community livelihoods – including cattle keeping and irrigated agriculture, which may threaten the ecological integrity of the site – are shown, as well as some of the exhibits at the small park visitor centre.