EXPLORE THE ISOLE EOLIE (AEOLIAN ISLANDS) with this slideshow, check the location map and get all the facts and information below. 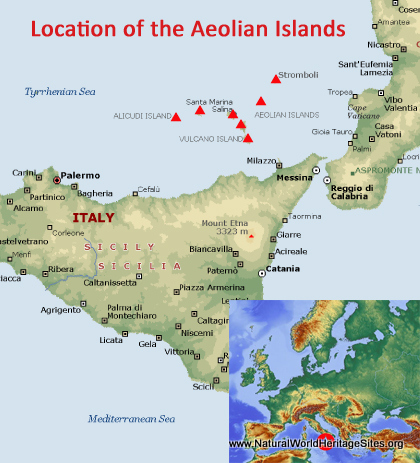 Location and Values: The Isole Eolie (Aeolian Islands) is a group of volcanic islands lying off the north-east coast of Sicily in the Mediterranean Sea.  There are seven main islands and six islets in the group, covering a total land area of 12 km2.  They form part of a 200 km volcanic arc (like the Pacific ‘Ring of Fire’), resulting from collision of the African continental plate with the European one.  While most of the volcanic arc is dormant and lies under the sea, three or four of the islands (Stromboli, Vulcano, Lipari and perhaps Panarea) are still active.  The island group is globally important as an outstanding example of volcanic island building and destruction, exhibiting an exceptional diversity of associated geological features. In particular, the islands exhibit two of the six classic types of volcanic activity recognized worldwide by vulcanologists, which take their names from islands in the group. Strombolian volcanism involves continuous regular spurts of lapilli, bombs and blazing gas, while the Vulcanian type involves more violent eruptions at much longer intervals.

Conservation Status and Prospects.  According to IUCN’s Conservation Outlook Assessment (2017) the conservation status of the Isole Eolie (Aeolian Islands) is ‘good, with some concerns’. The IUCN report notes that ‘although the current state of the geological values for which the World Heritage Site was inscribed is good and their condition is stable, there are significant concerns regarding the deteriorating state of the site´s other important biodiversity values. These concerns are all the more noteworthy in light of the major threat of mass tourism, which has been compromising the conservation of the site´s natural heritage since its inscription and threatening the islands´ notable endemic species. The absence of a functioning management system to implement conservation measures is a major issue, compromising the site´s future capacity to conserve its values. ’

The slideshow features the two islands that are most important to the world of vulcanology, and have given their names to particular types of volcanic activity:  Stromboli and Vulcano.  The slideshow starts in Stromboli, with views of the island from a boat tour around it, showing its classic cone shape and various geological features.  These include the massive slide of grey-black ash and lava flows on the western side of the island (known as the Sciara del Fuoco) resulting from the continuous volcanic activity higher up the slope; and the characteristic old volcanic plug of Strombolicchio lying offshore, like an ancient castle emerging sheer-sided from the sea.  One of the most popular activities for visitors to the islands is the strenuous climb up the slopes of Stromboli at dusk, with an hour spent watching the exhilarating display of fireworks from the crater rim after dark, as the molten magma bubbles up and explodes in a 200m-high display.

The next part of the slideshow features the contrasting geology of Vulcano, starting with a boat tour around the island, and showing bathers at the therapeutic ‘mud pool’ in the Baia di Levante hydrothermal system.  It then takes a tour of the island’s main La Fossa volcanic cone, providing spectacular views across to neighbouring islands and into the crater.  The rim and inner slopes of the crater are pockmarked with numerous fumeroles which produce spectacular coloured deposits of sulphur, chlorides and bromides. The upper slopes are strewn with debris from the last major eruption (1888-90), including some massive bombs.  The crater rim is a popular place to watch the sun set, as steam from the fumeroles is blown off the mountain top and the sun touches the sea and dips below the western horizon.