You are here: Home1 / All featured sites2 / Kaziranga National Park

EXPLORE INDIA’S KAZIRANGA NATIONAL PARK with this slideshow, check the location map and get all the facts and information below. 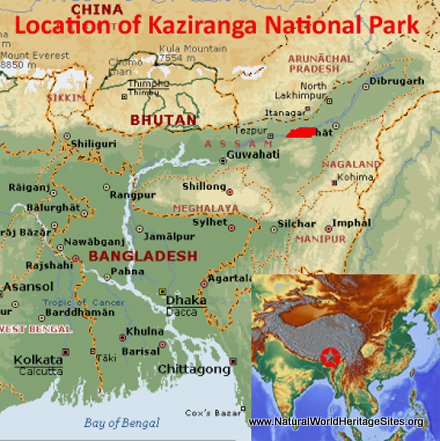 Location and Values: Kaziranga National Park is located on the Brahmaputra Valley floodplain in India’s north-eastern State of Assam. It is one of the last unmodified natural areas in South Asia covering a vast area of tall grassland interspersed with shallow pools and patches of deciduous to semi-evergreen woodlands. Kaziranga is regarded as one of the finest wildlife refuges in the world, where the Indian one-horned rhinoceros has been saved from the brink of extinction. It also supports significant populations of other threatened species including tigers, elephants, wild water buffalo and bears as well as important aquatic species such as the Ganges River dolphin.

Conservation Status and Prospects. According to IUCN’s recent Conservation Outlook Assessment there is significant concern over the conservation status of this site. The IUCN report notes that ‘Kaziranga National Park is considered as one of the better managed protected areas in the country and elsewhere, owing both to its enabling framework and demonstrable success in conservation. There has been no significant deterioration in its values over the years and the natural attributes are likely to continue their healthy trend at least in the medium term. However, after decades of conservation success the recent spike in rhino poaching in the site is of particular concern. The changing dynamics of the surrounding landscape, particularly with regard to the anthropogenic elements, will be placing increasing pressure on the ecological integrity of the site. The current rhino poaching crisis has shown that the inevitable intensification of threats, current and potential, to the site will necessitate enterprising and adaptive management strategies to deal with the developing situation.’

The photos in this slideshow are intended to ‘tell the story’ of the Kaziranga National Park, showing the area’s landscapes, natural habitats, plants and animals, people, threats and conservation needs. One of the main attractions for visitors to Kaziranga is the opportunity to ride on the back of a domesticated elephant, allowing them to approach wild rhinos and other wildlife at close quarters and providing a high enough vantage point to spot wildlife in the tall grass. Alternatively visitors are required to use the services of locally-hired small (Maruti) 4×4 jeeps and follow (largely) pre-determined routes along a few available tracks in designated areas of the park. The slideshow includes photos of all the main habitat types and many of the animals that are likely to be seen in the three ranges of Kohora, Agartoli and Bagori.