You are here: Home1 / All featured sites2 / Khangchendzonga National Park

EXPLORE Khangchendzonga National Park with this slideshow, check the location map and get all the facts and information below. 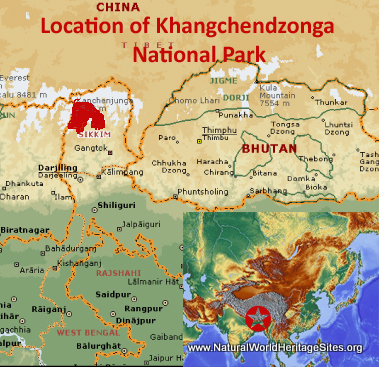 Location and Values: Khangchendzonga National Park is located in the heart of the Himalayas, occupying 25% of India’s Sikkim State. At its core, Mount Khangchendzonga (8,586m) is the world’s third highest peak, a sacred mountain that owes its protection to the persistence of belief systems and rituals associated with natural elements of the mountain environment (such as caves, rivers and lakes) in Buddhist and pre-Buddhist cultures. The park covers an enormous diversity of habitats and an extraordinary range of altitude from below 1,220m to 8,586m, with 20 mountain peaks over 6,000m. It is a spectacularly scenic environment with snow-capped mountains, glaciers, lakes and hanging valleys, perched on steep-sided mountain slopes clad in ancient old-growth forests. Although 90% of the site occupies land above 3,000m its global significance for biodiversity is based primarily on the protection of species associated with the temperate forests at lower altitudes (which have been mostly destroyed in other areas of the Himalayas). Khangchendzonga National Park provides habitat for nearly half of India’s bird species, a third of its flowering plants and many iconic ‘flagship’ species such as snow leopard, clouded leopard, red panda, Himalayan thar, blue sheep and Tibetan wolf. It is part of a wider conservation complex which includes the contiguous Kangchenjunga Conservation Area in Nepal, as well as parts of the world heritage buffer zone that fall within the wider landscape, designated as a Biosphere Reserve.

Conservation Status and Prospects. According to IUCN’s Conservation Outlook Assessment (2020) the conservation status of Khangchendzonga National Park is ‘good’. Its remote location and extreme difficulty of access means that most areas with the park are rarely, if ever, visited by people. The exceptionally high cultural, religious and spiritual significance of the Khangchendzonga/Kangchenjunga landscape ensures an unusually high degree of respect and reverence for all natural resources. The main conservation threats are pressures for land-use change (such as conversion of forest to pasture), the potential for hydropower developments, and climate change. Local communities are not yet adequately engaged in management decision making and this may undermine the best intentions of the authorities. Climate change is already resulting in observed shifts in vegetation patterns and the upper limits of species ranges, with certain animal species moving to higher areas of the park. The longer-term ecological impacts of global warming, including changes associated with the melting of glaciers, are not yet known.

The slideshow ‘tells the story’ of Khangchendzonga National Park with a series of photos that starts in the high altitude valleys with distant views of the snow-capped mountain peaks and follows the hiking trail that descends down into the forested lower slopes. There are 280 glaciers in the site and the blue-green ice wall of one of these is shown, as well as the green lake at the end of the 26km-long Zemu glacier. Some of the animals that occur in the higher valleys are shown, including flocks of blue sheep (bharal), Himalayan thar (a kind of mountain goat), Himalayan marmot and snow leopard. The ever-changing scenery revealed during the descent is illustrated with the first signs of human habitation, Buddhist temples and land cleared for pasture. The forested slopes at lower elevations support the greatest diversity of flora and fauna, including a variety of orchids and rhododendrons as well as iconic animals such as red pandas, and birds such as monal and kalij pheasants.

Tajik National Park (Mountains of the Pamirs)
Scroll to top