You are here: Home1 / All featured sites2 / Kilimanjaro National Park

EXPLORE TANZANIA’S KILIMANJARO NATIONAL PARK with this slideshow, check the location map and get all the facts and information below. 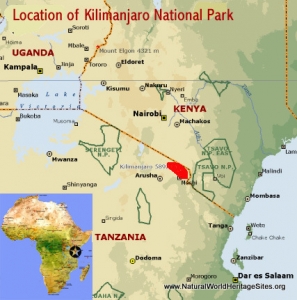 Values: Mount Kilimanjaro is one of the best known mountains in the world and its summit is the highest point in Africa (5895m). This massive volcano stands in splendid isolation above the surrounding plains, with its snowy peak looming over the dry acacia savannas. Around the volcano’s caldera are numerous permanent glaciers and impressive ice cliffs. These are unusually accessible to hikers, without the need for specialist mountaineering equipment and training . The world heritage site covers the upper slopes of the mountain and includes a range of habitats typical of high tropical mountains with giant lobelias and groundsels in the Afro-alpine zone. The park is encircled by protected montane forest, with intensive cultivation on the fertile lower slopes. A comprehensive review of the world heritage values of Mount Kilimanjaro is provided below, together with details of the area’s conservation status and the threats it faces.

REVIEW OF WORLD HERITAGE VALUES: The specific attributes which qualify Mount Kilimanjaro for world heritage status can be summarised as follows:

Africa’s highest peak and one of the world’s largest free-standing mountains: Kilimanjaro is not only the highest mountain in Africa, but also one of the largest volcanoes in the world. It stands isolated on the surrounding plains of East Africa, rising some 4,900 m above the plains so that its summit attains an elevation of 5,895 m a.s.l. Its massive bulk covers a land area of almost 4,000 km2.

Spectacular mountain scenery: The world heritage site (which is limited to the top of the mountain) includes some of Africa’s most spectacular mountain scenery, including Africa’s highest point (Uhuru Peak, 5,895m), remnant glaciers, and a number of lakes, waterfalls and bog-filled valleys. It is a relatively young extinct volcano, with three main peaks, Kibo, Mawenzi and Shira.. The central area of the youngest peak (Kibo) consists of two concentric craters with a 350m-deep ash pit in the centre and some spectacular ice fields and glaciers around the rim.

Rare and endemic species: By comparison with Africa’s other high mountains, Kilimanjaro is relatively species-poor on account of its recent origins (450-750,000 years) and comparatively dry climate. Although it does not qualify for inclusion on the world heritage list on account of its biodiversity values, they are nevertheless important. Kilimanjaro is part of the Kenyan Mountains Endemic Bird Area (EBA), and an internationally-recognised Important Bird Area (IBA). It supports four species of bird that are considered globally Vulnerable and two species that are near-threatened, as well as three of the restricted-range species of the Kenyan Mountains EBA. The world heritage site does not cover any of the forested habitats where most of the mammal, bird and plant biodiversity is concentrated but it does include the more unique ecological communities of the heaths, moorlands and high-altitude deserts. These areas support some notable endemic plant species including the spectacular giant groundsel, Dendrosenecio kilimanjari, and the giant Lobelia deckenii.

CONSERVATION STATUS AND PROSPECTS: The world heritage site covers the higher elevation parts of the Kilimanjaro National Park (above the tree line at 2,700 m). It is an area that is ‘buffered’ from the intensively cultivated lower slopes of the mountain by a wide belt of protected forest (formerly forest reserve but incorporated into the national park since 2005). This ensures that the world heritage site remains remote, inaccessible and relatively unaffected by human activities. The most significant threat to its scenic value (for which it was inscribed) is climate change. The mountain’s glaciers are melting fast, and are expected to disappear altogether within a couple of decades. Furthermore, the characteristic altitudinal zonation of vegetation communities will inevitably shift in the medium-to-long term as the climate warms. Maintaining Mount Kilimanjaro’s values will require long-term protection of the entire ecosystem, as its ability to adapt to a warmer climate will require landscape connectivity with adjacent mid-elevation forests and other habitats at lower altitudes.

MANAGEMENT EFFECTIVENESS: The remote location and rugged terrain of the mountain summit area (designated as world heritage) ensures a high degree of natural protection against unsustainable resource use, limiting the need for management intervention. There is a good current management plan for the wider area covered by Mount Kilimanjaro National Park, but little recent information on the level of its implementation.

Climate change: Global warming is raising temperatures and melting Mount Kilimanjaro’s glaciers. The volume of glacial ice is now 80% less than it was a century ago and the glaciers are expected to disappear altogether within the next couple of decades, possibly as early as 2015-20. Climate change is likely to cause a general shift of vegetation zones to higher elevations reducing the area of the rare high-altitude Afro-alpine vegetation communities. There may also be an increased incidence of landslides and flash- flooding if precipitation falls as rain instead of snow.

Ecological isolation: The property is ‘buffered’ from adjacent settlements by a 5-10 km wide belt of protected natural forest and plantations, but the land beyond the lower boundary of the park (at about 1,800 m) is becoming more intensively settled and cultivated, eliminating previous landscape connectivity with nearby natural habitats, especially to the west (Arusha National Park) and north-west (Amboseli National Park, Kenya). Thus historical migration routes of keystone species, such as elephants, are being lost.

Poaching: Subsistence and commercial hunting is carried out in the forested lower slopes, and to a lesser extent at higher elevations where its impact is limited due to the extremely rugged terrain and difficulty of capturing prey species.

Fire: Wild fires are a major problem and most are started by people. This may be intentional, for example when fire is used by poachers, cattle herders or honey gatherers, or accidental (e.g. in the case of visitor camp fires). The unnaturally frequent fires are likely to be having an adverse effect on natural community dynamics, particularly in the heath zones where fires are most extensive, but there is currently little understanding of the effects of fire.

Deforestation and changing land use on the lower slopes: The forested slopes at elevations below about 1,800 m (which lie outside the world heritage property and below the lower boundary of the (newly-extended) National Park) are under increasingly-intensive cultivation, thus reducing the functioning and ecological resilience of the entire ecosystem. Deforestation of the lower slopes is thought to be partially responsible for the retreat of the glaciers, by reducing the flow of moisture up the mountainside and depleting the mountain’s icy ‘hood’.

Impacts of tourism: With some 40-42,000 visitors annually (for the period 2006-8), tourism creates a number of problems related to litter and waste management; erosion of paths and trampling of vegetation.

Invasive alien plants: There are indications that invasive exotic plants are present, but the extent of the threat is unknown.

This slideshow provides a comprehensive overview of Tanzania’s Kilimanjaro National Park showing the area’s spectacular mountain landscapes and its wildlife habitats. Some of the characteristic plants and animals in each vegetation zone are illustrated, from the montane forests of the lower slopes, through the tree heathers to the alpine moorlands and the glaciers, rock and ice around the summit. Some of the conservation management issues, local community livelihoods and typical visitor experiences involved in hiking to the summit are shown.