You are here: Home1 / All featured sites2 / Komodo National Park

EXPLORE Indonesia’s Komodo National Park with this slideshow, check the location map and get all the facts and information below. 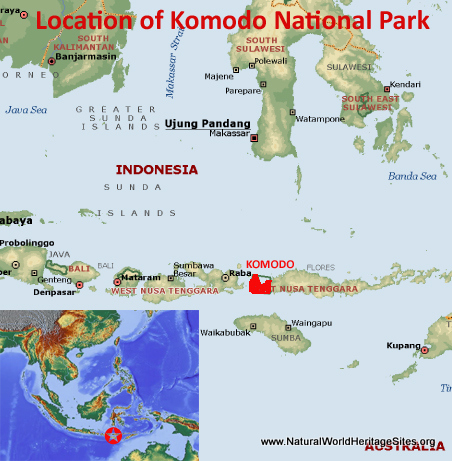 Location and Values: Komodo National Park is located in the geographic centre of Indonesia, along the chain of islands that runs between Java in the west and Papua in the east.  It includes three major volcanic islands (Komodo, Rinca and Padar), numerous smaller islands and areas of pristine seas with abundant coral between the islands. The park’s most notable inhabitant is the Komodo Dragon (Varanus komodoensis), the world’s largest lizard, which grows to a length of 3m and can weigh up to 100kg.  It is an aggressive hunter which preys on large mammals including water buffalo, deer, wild boar and feral goats, and has a formidable reputation.  The islands and underwater seascapes are both astonishingly beautiful, so the area has become a popular diving location as well as a dragon-spotting one. The archipelago of islands with their craters, grassy hillsides, rocky headlands, palms, mangroves and forests touch the crystal clear waters along a coastline of stunning coves, beaches and headlands, with extraordinary far reaching views from any vantage point.  The seas support some of the richest coral reefs in the world with blue and sperm whales, giant manta rays, ten species of dolphin and no fewer than five species of turtle.

Conservation Status and Prospects.  According to IUCN’s Conservation Outlook Assessment (2017) the conservation status of the Komodo National Park is of ‘significant concern’. The IUCN report notes that ‘The exceptional land- and seascape beauty of the site remains well-preserved and largely intact. The site contains the majority of the world’s areas in which wild populations of the Komodo dragon lizard still exist with population estimated at around 2,448 individuals. The marine area of the site is, however, being impacted by a number of threats, including fishing, boat anchoring and pollution. While management efforts have so far been focused on increasing levels of visitation and issues related to conservation of the Komodo dragon, broadening of the management focus to address issues within the marine area is required to ensure effective long-term protection of the site. More effective enforcement is needed to prevent destructive fishing practices to ensure that natural assets could bring benefits to local people sustainably along with conserving natural assets. ’

The slideshow ‘tells the story’ of Indonesia’s Komodo National Park with a portfolio of photos by Peter Howard from a visit in April 2018.