You are here: Home1 / All featured sites2 / Lake Baikal

EXPLORE Lake Baikal with this slideshow, check the location map and get all the facts and information below. 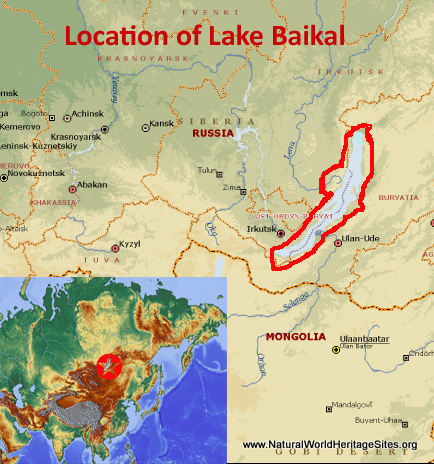 Location and Values: Lake Baikal is the oldest and deepest lake in the world, located in southern Siberia, close to the Russian border with Mongolia. Its age, isolation and unusually fertile depths have resulted in one of the world’s richest and most unusual freshwater faunas, with an exceptional variety of endemic species of aquatic animals and plants. Some 2,630 species have been recorded, 65% of them endemic, the most notable animal being the endemic Baikal seal, a uniquely freshwater species of what is otherwise a marine group of mammals. The importance of the site to our understanding of biological evolution is outstanding and has been compared with that of the Galapagos Islands.
The lake contains 20% of the world’s unfrozen surface freshwater, and the site’s listing under all four world heritage natural criteria reflects its global importance in many respects. The lake itself covers a little over one third of the world heritage site, while nearly two-thirds are terrestrial reserves and a coastal zone, 5-70km wide, around the lake. This ensures that the lake’s (mostly) rocky catchment is protected, and its waters remain exceptionally clear. The lake is of tectonic origin and lies within an active rift system that is scenically attractive with a surrounding of high mountains, glaciers, waterfalls, and steep shorelines with a mix of deciduous and coniferous forests.

Conservation Status and Prospects. According to IUCN’s Conservation Outlook Assessment (2014) the conservation status of Lake Baikal is ‘good, with some concerns’. The IUCN report recognizes that the site’s values are still well preserved and largely intact, the sheer size of the lake buffering any adverse impacts of developments in most areas. The population of Baikal Seals is currently at an all time high and appears stable in spite of some commercial hunting. However the report notes that pollution from the Selenga River and the industrial corridor of the Angara River is a concern, as well as new emerging threats, such as large scale tourism development, near-shore eutrophication (nutrient enrichment) from untreated sewage, and climate change. Historically, pollution from the Baikalsk Paper and Pulp Mill was also a significant concern, but it was closed in 2013 (although mitigation of past negative impacts is still ongoing). Tourism development has localized impacts around the lake’s southern shore, particularly around Maloe Morye and parts of Olchon Island, with 674,300 visitors recorded in 2010. Fish populations were subject to unsustainable exploitation in the 19th and 20th centuries but the allocation of fishing quotas is now maintaining a sustainable offtake (from a reduced fish population). The potential for hydroelectric developments on the Selenga and Orkhon Rivers in Mongolia, currently under feasibility study, is also a long-term concern.

The slideshow ‘tells the story’ of Lake Baikal with a portfolio of photos by Andrey Petrov and Adam Francis.