EXPLORE KENYA’S LAKE TURKANA NATIONAL PARKS with this slideshow, check the location map and get all the facts and information below. 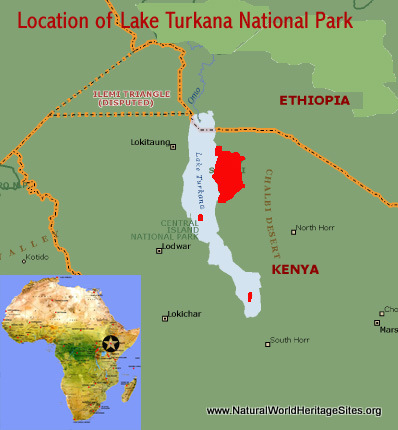 Values: Lake Turkana, known as the Jade Sea, exists in a barren landscape in the semi-desert environment of northern Kenya. The three National Parks (Sibiloi, Central and Southern Islands) are a stopover for migrant waterfowl and are major breeding grounds for the Nile crocodile and provide an outstanding laboratory for the study of plant and animal communities. Sibiloi National park protects the Koobi Fora fossil deposits which are rich in pre-human, mammalian, molluscan and other fossil remains and have contributed more to the understanding of Quaternary Palaeo-environments than any other site on the continent.

Fossil Deposits: Fossil deposits at Koobi Fora (in Sibiloi National Park) include pre-human, mammalian, molluscan and other fossils that have contributed more to the understanding of human ancestry and palaeo-environments than any other site in Africa. The fossil remains include a petrified forest thought to have grown seven million years ago (when the area was much wetter than it is today), together with a great diversity of extinct fauna including giant tortoise, crocodile, behemoth mammoth, rhinos, otters and hippos. The complexity of the fossil record enables the reconstruction of palaeo-environments dating back four million years. Five species of hominid fossil have been discovered including the earliest of the australopithecines, Australopithecus anamensis, estimated to be 3.8-4.2 million years old.

Complex of recent geological processes: Lake Turkana is Africa’s fourth largest lake and the most saline of them. It is situated in a semi-desert environment, characterized by recent volcanic, erosional and sedimentary land forms. The area’s main geological features stem from the Pliocene and Holocene periods (from four million to 10,000 years ago). The world heritage property (1,615 km2) covers three separate National Parks – Sibiloi (on the eastern shores of the lake), Central and South Islands, together with an aquatic zone stretching 1 km into the lake. These three areas encompass this diversity of geological features, including extensive sedimentary deposits, volcanic features and geological faulting.

Diversity of aquatic and lakeshore habitats in a semi-desert environment: The parks include a great diversity of aquatic, shoreline and semi-desert terrestrial habitats. The waters of the lake are 2.5 times saltier than the normal maximum limit of drinking water, but it is drinkable and supports a diversity of freshwater fish species and, where suitable muddy substrate exists, beds of submerged aquatic macrophytes (Potamogeton pectinatus) and shoreline grasses. The lakeshore substrates vary from rock to pebble, sand and mud, while terrestrial habitats include Acacia savannas, Commiphora bushlands, grassy plains, rocky ridges and groves of desert date and doum palms.

Diversity and abundance of birds: Lake Turkana is an internationally-recognised Important Bird Area, with 84 waterbird species, including 34 Palaearctic migrants (for which it serves as an important flyway and stop-over site for birds on passage). More than 10% of the entire East African/South East Asian population of Little Stints (more than 100,000 individuals) may winter here. At least ten regionally-threatened species of birds breed, including African skimmer.

Rare and endangered fauna: The lake supports the world’s largest colony of Nile crocodile, with an estimated population of 14,000 individuals breeding on Central Island in 1968. Rare and endangered mammals include hippopotamus, wild dog, lion, cheetah, Grevy’s zebra and Lelwel hartebeest.

CONSERVATION STATUS AND PROSPECTS: Lake Turkana’s unique qualities as a large lake in a desert environment are under threat as the demands for water for development escalate and the financial capital to build major dams becomes available. Historically, the lake’s level has been subject to natural fluctuations in response to the vicissitudes of climate, with the inflow of water broadly matching the amount lost through evaporation (as the lake basin has no outflow). The lake’s major source of water, Ethiopia’s Omo River is now targeted for a series of five major dams and associated irrigated agricultural schemes. Two of these dams have been completed and a third is at an advanced stage of construction. There are still strategic choices to be made on the management of the lake basin’s water resources, but it seems inevitable that the ecology and biodiversity values of the property will be adversely affected by these development pressures. Apart from the impact of these major changes (most of which have not yet been effected), there are numerous challenges at the site management level, with wildlife populations thought to be in decline as a result of poaching pressure, over-grazing by domestic stock and habitat change associated with the receding shore-line. Increased levels of investment in site management are clearly required. In addition, major oil deposits have been discovered nearby and their exploitation will require rigorous environmental safe-guards if the integrity of the property is going to be adequately protected.

MANAGEMENT EFFECTIVENESS: Protection and management of the site is severely constrained by its remote location, lack of infrastructure and low levels of funding. Although an out-of-date management plan exists, there is little indication that its provisions have been implemented, and the parks’ wildlife and other resources seem to be in decline. The bigger threats to the biodiversity values of the property – damming of the inflowing rivers and oil exploitation elsewhere in the lake basin – bring substantial economic benefits and seem likely to take precedence in national development priorities.

THREATS: The following issues represent specific threats to the ecology, conservation and values of the world heritage site. Lake Turkana National Parks were considered sufficiently threatened by IUCN (the world heritage convention’s technical advisory body) in 2012 to warrant a recommendation for their inclusion on the List of World Heritage In Danger. Although this recommendation was not adopted by the World Heritage Committee, the threats listed below remain severe.

Damming of inflowing rivers and upstream use of waters: The inflowing rivers are being progressively dammed and an ever-increasing amount of the water that used to flow into the lake is being used upstream for irrigation and other uses. The Omo River (which runs through Ethiopia) accounts for 90% of the lake’s inflow, and is being transformed through construction of a series of five dams. Two have been completed and a third (Gibe III) was more than 50% complete by early 2012. By 2024 irrigated sugar plantations along the river are expected to use 16% of the basin’s water and lead to a 8.4 m reduction in lake level.

Changing seasonality and nutrient status of inflowing waters: The loss of seasonality in water inflow resulting from dams on all the lake’s tributaries will reduce the extent and quality of floodplain vegetation and impact the ecology of aquatic habitats that are important fish-spawning sites. Furthermore, river-borne silt that would have enriched the floodplains, delta and lake will be deposited in the dams, with major ecological implications for the Lake Turkana ecosystem and biodiversity.

Drought and climate change: The lake level dropped by 10 m between 1975 and 1992, partly as a result of drought in the catchment areas. Periodic droughts exacerbate the problems associated with upstream use of water, denying the lake the fresh water needed to compensate for evaporation losses (since the lake has no outflow). Furthermore, the salinity of the lake can be expected to increase further due to increased evaporation if global warming leads to a general rise in temperature around the lake.

Over-grazing by cattle, sheep and goats threatens the vegetation communities and ecology of the entire Lake Turkana basin

Over-grazing, especially shoreline habitats: Human populations around the lake are becoming more sedentary and associated grazing pressures from domestic stock are becoming more intensive, leading to over-grazing. This is resulting in deterioration of lakeshore habitats, impacting biodiversity. Although local pastoralists are guaranteed grazing and watering rights in the park at times of drought, the impact of grazing is affecting a large part of the park permanently, resulting in overgrazing, trampling of vegetation and an increase in woody vegetation.

Poaching: Wildlife populations seem to be declining and the few remaining large mammals are concentrated in the most secure parts of the property, indicating that poaching is a significant threat. Certain flagship species, such as reticulated giraffe and Grevy’s zebra are reported to have disappeared altogether from the area since the property was listed.

Over-fishing: Illegal fishing activities are taking place inside the property, and disturbance by fishermen on Central Island has reportedly caused the abandonment of the only known breeding site of African skimmers, a regionally-threatened bird. There are, however, no fish stock assessment data to enable assessment of the broader impact of over-fishing on the fisheries resource. Past attempts to initiate large-scale industrial fishing operations have so far failed, but some pastoralist (Turkana) communities have adapted to fishing in response to drought and famine.

Tree-cutting: Trees are taken for fuelwood and charcoal, exposing the thin soils to strong winds.

Destruction of crocodile nests: Crocodiles are heavily persecuted by fishermen who destroy nesting sites, including those on South and Central Islands.

Theft of fossils: The exposed ground at some of the fossil sites are scattered with fossils that could easily be picked up and taken by visitors.

Oil exploration and development: Oil exploration is taking place across the Lake Turkana basin and significant finds have been made recently (on the south-western shores, outside the property). Development of these resources seems set to transform the local economy, with construction of major new infrastructure and significant associated risks.

Regional infrastructure corridor linked to Lamu Port development: The governments of Kenya, South Sudan and Ethiopia are collaborating on a major new infrastructure corridor through northern Kenya, to link a major new port at Lamu (on Kenya’s north coast) with other parts of the region. Although this is still in the early planning stages it may have a significant impact on developments at Lake Turkana.

Social unrest arising from tribal conflicts over diminishing resources: The damming of the Omo River and associated developments will lead to significant ecological change and diminish the availability of resources for the 300,000 people of six tribal groups who depend on them. Most of these people are extremely poor, and there is high potential for violent conflict over diminishing resources. Although no-one lives inside the property, local pastoralists are allowed grazing rights in the dry season and pressure for resources from within the park is likely to escalate.

The slideshow provides a comprehensive overview of Kenya’s Lake Turkana National Parks world heritage site, showing its landscapes, wildlife habitats, plants and animals. It features the extensive mammalian fossil beds at Koobi For a (Sibiloi National Park) while also illustrating some conservation management issues, local community livelihoods and some of the (rather limited) visitor facilities and typical experiences.