You are here: Home1 / All featured sites2 / Landscapes of Dauria

EXPLORE Landscapes of Dauria with this slideshow, check the location map and get all the facts and information below. 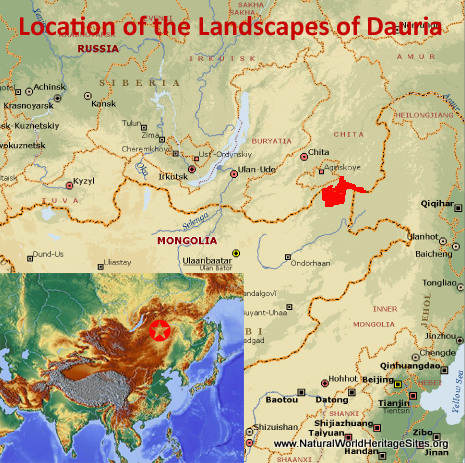 Location and Values: The Landscapes of Dauria is a transboundary world heritage site that straddles the border between Mongolia and the Russian Federation, in the region where these countries border onto China. It covers an area of extensive temperate grasslands (known as the Daurian Steppe, ecologically similar to the North America Prairie), at the convergence of three major floristic regions. The area covers a diverse complex of steppe ecosystems, with grasslands punctuated by lakes, wetlands and floodplains, as well as pockets of forest. It serves as an important seasonal habitat and migration stop-over location for millions of migratory birds on the East Asian-Australasian Flyway, and for the migratory Mongolian gazelle. In addition it supports populations of rare and endangered species such as White-naped and Hooded Cranes, Swan Goose, Relict Gull and Great Bustard, as well as Mongolian Marmots and Pallas Cats.

Conservation Status and Prospects. According to IUCN’s technical evaluation of the nomination for this recent addition to the World Heritage List (2017) the conservation status of the Landscapes of Dauria meets world heritage standards, although protection regimes vary between different jurisdictions across the site. The site represents a small part of the extensive Daurian Steppe ecosystem and many of the site’s bird and mammal fauna are migratory, spending part of the year outside its boundaries. Therefore the ecological integrity of the site is dependent on effective wildlife protection over a much wider area. It will be important to ensure that significant long-term threats are addressed, including threats to the local hydrology, the impacts of climate change, illegal hunting (within the site and beyond its boundaries), grazing pressure and fire damage.

The slideshow ‘tells the story’ of the Landscapes of Dauria with photos by Maja Vasilijević (early September 2014) and Andrey Petrov (late August 2006). They illustrate the landscape features of this outstanding place, together with some of the basic visitor information and ecotourism facilities. The tour starts in Daursky State Nature Biosphere Reserve during September with distant views of the Torey Lakes, and a flock of white-naped cranes overhead. It then passes through the site’s buffer zone on the way to Coibalsan (where a local man on horseback is encountered and distant views provided of a typical circular yurt house, isolated on the wide grassy plains) before crossing into the Mongol Daguur Strictly Protected Area on the Mongolian side of the border. Here, the meandering course of Uldza River and its wide floodplain are illustrated alongside the gentle grassy slopes of Il Turuut Mountain. The tour passes back to Daursky Reserve through the buffer zone where a family inspects a goat enclosure, past Telli Ranger Station to the Adon Chelon sector with views of the rolling hills, rocky outcrops and basic ecotourism facilities in this part of the site. The second part of the slideshow demonstrates the climatic variability experienced here, with a series of much greener scenes taken just two or three weeks earlier in the season (in late August). This series of photos provides further views of the Daursky Reserve (on the Russian side of the border), and the Torey Lakes with a herd of Bactrian (two-humped) camels and some picturesque rock outcrops punctuating the grassy hills.

Natural and Cultural Heritage of the Ohrid Region