You are here: Home1 / All featured sites2 / Laponian Area

EXPLORE Laponian Area with this slideshow, check the location map and get all the facts and information below. 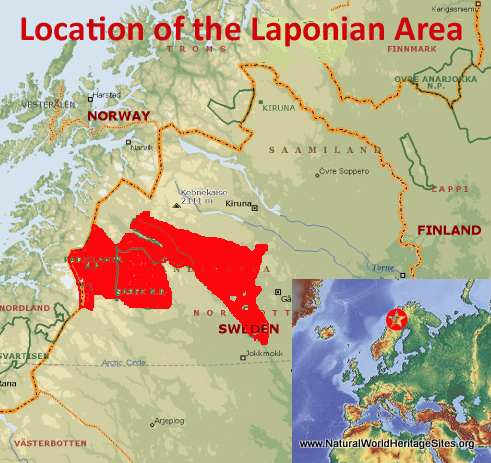 Location and Values: The Laponian Area lies within the Arctic Circle in northern Sweden. It is an extensive wilderness of high mountains, primeval forests, vast marshes, lakes and river systems that is protected within four designated national parks and two nature reserves. Within this area the Saami people practice a traditional way of life based on the herding of domesticated reindeer between summer pastures in the mountains and winter sanctuaries at lower elevations. This ancestral way of life has been abandoned in many parts of the world, making this area one of the last, largest and best preserved of the few such areas that survive.
From a natural heritage perspective the site is outstanding in terms of its extraordinary natural beauty, its exceptional geology and the intact ongoing ecological processes that it sustains. Snow-covered mountains cradle picturesque alpine lakes, while raging glacial torrents and clear-water rivers cascade down the forested slopes to the Rapa Valley with its enormous delta surrounded by sheer cliffs. From a geological perspective the area showcases all the processes and geo-morphological features associated with glacial activity including U-shaped valleys, glacial cirques and channels, moraines, outwash plains (sandurs), talus slopes, and drumlins as well as rock weathering and palsa mounds derived from freeze-thaw action in the tundra. The ongoing ecological processes associated with the Laponian Area’s primeval conifer forests and the extensive mire complex at Sjavnja/Sjaunja are also considered to be outstanding in a global context.

Conservation Status and Prospects. According to IUCN’s Conservation Outlook Assessment (2017) the conservation status of the Laponian Area is ‘good’ and stable. Management of the four designated National Parks and two Nature Reserves that cover most of the area is highly effective. The main potential long-term threat is climate change, which is likely to impact the sensitive boreal ecosystem. Another potential threat is the possible development of mining prospecting in the vicinity of the site, which could affect its natural and cultural values especially by restricting reindeer movements around the property. A new participatory management board, including representatives of the Saami herder communities, is in place with responsibility for implementing an agreed management plan, adopted in 2012.

The slideshow ‘tells the story’ of the Laponian Area with a portfolio of photos by Bastian Bertzky from a visit in August 2018.  They illustrate the landscape features of this outstanding place, together with some of the typical plants and animals, including reindeer and capercaillie.  Some examples of traditional Saami houses are shown. The impressive visitor centre at Stora Sjöfallet/Stuor Muorkke National Park (Naturum Laponia) is shown, together with some of the displays it features.