EXPLORE THE LORD HOWE ISLAND GROUP with this slideshow, check the location map and get all the facts and information below. 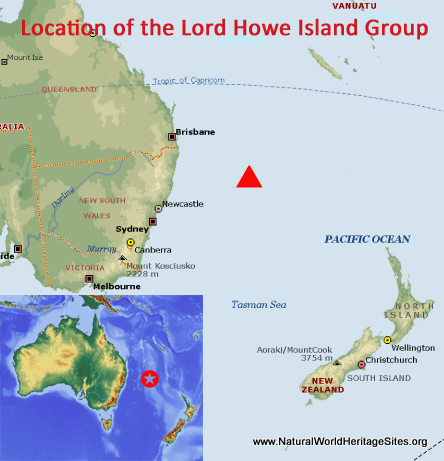 Location and Values: The Lord Howe Island Group is located in the Tasman Sea/South Pacific Ocean about 600 km east of Australia’s New South Wales coast. The island group is the eroded remnant of a large volcanic seamount – once forty times its present size – where the Australian tectonic plate moves over a hotspot in the upper mantle deep under the ocean. The main Lord Howe Island is dominated by two large mountainous volcanic plugs, while a number of much smaller scattered islands lie offshore and the massive remnants of another emergent volcanic plug (known as Ball’s Pyramid) is located 25km to the south-east.  The terrestrial part of the site covers just 15km2, while the surrounding seas (including the world’s most southerly coral reef) make up the rest.   The islands are scenically spectacular and (like the more famous Galapagos Islands on the other side of the Pacific) have served as an ‘evolutionary laboratory’ in the development of rare endemic species (such as the Lord Howe Woodhen, a flightless bird), as well as supporting large colonies of nesting seabirds.

Conservation Status and Prospects.  According to IUCN’s Conservation Outlook Assessment (2017) the conservation status of the Lord Howe Island Group is ‘good’. The IUCN report notes that ‘Good management is in place and, provided resourcing and commitment to addressing the key threats to World Heritage values are sustained, the values should remain preserved. The outstanding scenic values are likely to remain in good condition and, subject to funding and effective program implementation, the significant natural habitat, rare plants and threatened wildlife are likely to persist in their current or an improved condition. However, it is crucial that invasive species eradication projects continue and are successfully implemented. Threats from climate change and rising oceanic temperatures as well as increasing impacts from marine debris require national and international action to reduce threats to some values and in particular the marine environment.’

The slideshow ‘tells the story’ of the Lord Howe Island Group through a series of photos by David Stanley taken on the main island.  The island has a small settlement and airstrip, museum, golf course and other tourism facilities, with regular air links to Sydney and Brisbane.  The photos show some of these facilities as well as the nature of the rugged coastline and vegetation, offshore islands, coral reefs, beaches and mountains.  The endemic Lord Howe Woodhen is illustrated as well as other resident island birds such as the currawong and sooty tern.  Efforts are being made to eradicate a number of introduced species which threaten the endemic fauna and flora, and a rat trap illustrates these efforts.  Introduced species remaining on the island include cats, dogs, mice, rats and cattle, while goats and pigs have successfully been eradicated in recent years.