You are here: Home1 / All featured sites2 / Manas Wildlife Sanctuary

EXPLORE INDIA’S MANAS WILDLIFE SANCTUARY with this slideshow, check the location map and get all the facts and information below. 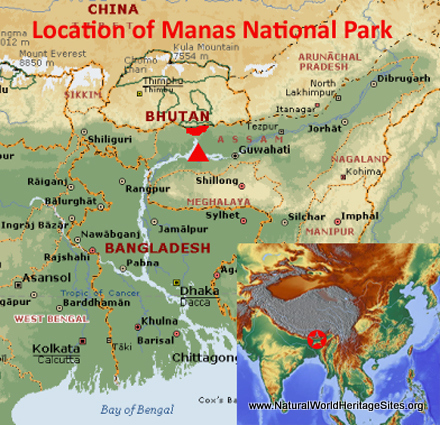 Location and Values: Manas Wildlife Sanctuary is a relatively small (391 km2) site located in the north-east Indian State of Assam, bordering the Himalayan foothills of Bhutan. It is part of the core zone of the 2,837 km2 Manas Tiger Reserve, and lies alongside the shifting river channels of the Manas River. This is one of the last remaining significant areas of undisturbed natural habitat in South Asia and includes a range of forested hills, alluvial grasslands and tropical evergreen forests. The site provides critical habitat for an exceptional diversity of plants and animals including rare and endangered species such as tiger, greater one-horned rhino, swamp deer, pygmy hog and Bengal florican.

Conservation Status and Prospects. According to IUCN’s recent Conservation Outlook Assessment there is significant concern over the conservation status of this site. The IUCN report notes that ‘the Manas Wildlife Sanctuary World Heritage Site has been the focus of long term conservation concern and action. The property inscribed in 1985 was, seven years later, added to the World Heritage In Danger List in response to concerns linked to civil unrest and the degradation of natural values. Most alarming was the disappearance of Greater one-horned rhino from the property over a short 13 year period (1988-2001). The site spent a total of 19 years on the In Danger List during which time recovery efforts have seen rhino numbers increase to currently (February 2014) 26 including the birth of new rhinos within the property. Other species are subject to recovery action and, whilst the site remains fragile and population trend data limited, it appears that populations are generally recovering. Management actions have also been slowly improved through the sustained efforts of the State Party backed by significant international expertise including 44 Committee Decisions and 6 IUCN/UNESCO Missions. Nevertheless there remain threats such as those from recurring insurgencies, poaching and encroachment, as well as the impact from existing and proposed upstream hydro-electric projects in Bhutan. The site was only removed from the Danger List in 2011. Continued management effort will be required to avoid a return to the situation of insurgence and insecurity that prevailed in the early 1990s and led to the site’s inscription on the Danger List. If security at the site can be effectively restored the conservation outlook for this property may well improve rapidly.’

The photos in this slideshow are intended to ‘tell the story’ of the Manas Wildlife Sanctuary, showing the area’s landscapes, natural habitats, plants and animals, people, threats and conservation needs. One of the main attractions for visitors to Manas is the opportunity to ride on the back of a domesticated elephant, allowing them to approach wild rhinos and other wildlife at close quarters and providing a high enough vantage point to spot wildlife in the tall grass. Alternatively visitors are able to use a few available tracks in designated areas of the park. The slideshow includes photos of all the main habitat types and many of the animals that are likely to be seen, particularly along the main tracks east of the Manas-Beki river between Bansbari and Mathanguri. A rafting trip down the Manas River from Mathanguri to the southern border of the sanctuary is also shown.