EXPLORE THE MANOVO-GOUNDA ST FLORIS NATIONAL PARK with this slideshow, check the location map and get all the facts and information below. 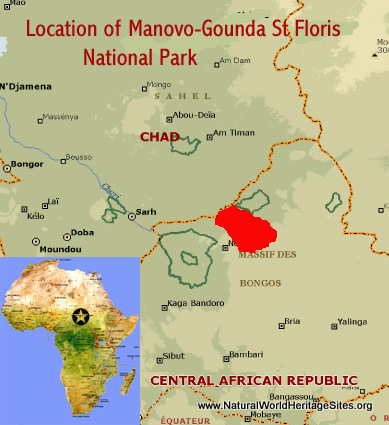 Values: The Park is the largest savanna park in west and central Africa, located at a major biogeographic crossroads of central Africa. It comprises three main zones: the wide grassy floodplain of the Bahr Aouk and Bahr Kameur rivers in the north, a gently undulating transitional plain of bushy or wooded savanna with occasional small granite inselbergs, and the Chaine des Bongo plateau in the south. The fauna of the Park reflects its transitional position between east and west Africa, the Sahel and the forested tropics: its large mammals include black rhinoceros, elephant, cheetah, leopard, wild dog, red-fronted gazelle and buffalo; a wide range of waterfowl species also occurs in the northern flood-plains. The site was added to the List of World Heritage in Danger because of illegal grazing and poaching by heavily armed hunters, who may have harvested as much as 80% of the Park’s wildlife, and it is doubtful whether any black rhino survive.
A comprehensive review of the world heritage values of the site is provided below, together with details of the area’s conservation status and the threats it faces.

REVIEW OF WORLD HERITAGE VALUES: According to IUCN’s Conservation Outlook Assessment (2014), the specific attributes which qualify Manovo-Gounda St Floris National Park for world heritage status can be summarised as follows:

Largest protected savanna in Central Africa. The Manovo-Gounda St Floris National Park covers an area of 17,400 km2 of northern wooded savanna (an area significantly larger than Serengeti National Park), with extensive grassy plains maintained by periodic flooding and fire. It is surrounded by Game Reserves and other protected areas totalling 80,000km2. The park encompasses the entire watershed of three major rivers (Manovo, Koumbala and Gounda) and includes extensive floodplains and wetlands, interspersed with numerous small granite inselbergs, with wooded slopes rising into the rugged sandstone Bongo massif to the south. The park straddles the seasonally dry Sudano-Sahelian biogeographical zone and moister areas of Sudano-Guinean woodland with closed-canopy gallery forests along some of the watercourses and bamboo in the higher altitude areas to the south.

Exceptionally rich savanna fauna, including rare and endangered species. The Park’s wildlife reflects its transitional position between East and West Africa, the Sahel and Congo Basin rainforests. It supports about 57 species of mammals including threatened species such as black rhino, elephant, hippopotamus, red-fronted gazelle (here at the southern limit of its range), lion, leopard, cheetah and wild dog. At the time of inscription there were large concentrations of herbivores, including buffalo, Buffon’s kob, waterbuck, and red hartebeest, but heavy poaching pressure has had a significant impact on these populations in recent years. Some 320 species of birds have been recorded in the Park, and the northern flood plains provide important habitat for water birds.

CONSERVATION STATUS AND PROSPECTS: The overall outlook for Manovo-Gounda St Floris is highly uncertain, with much of the large fauna already lost and regional insecurity preventing the development of an effective management regime. It is perhaps mainly the large size of the site and its isolation that provides a degree of de facto protection for its wildlife. Nevertheless, the latest aerial survey revealed a 75% loss of large mammals in just five years (between 2005 and 2010), and although most species are still present in small numbers, there is need for urgent action to stem the decline and allow wildlife populations to recover. This will require a major concerted effort involving a firm political commitment from government, supported by major investment from the international community

MANAGEMENT EFFECTIVENESS: There is no effective protection and management, due to a lack of resources, a prevailing state of insecurity and the vast area requiring management. The few guards deployed for the area’s protection are located at two stations on the periphery of the park, but they have very limited transport, few resources and are unable to access most areas of the park. This leaves the park exposed to ongoing threats from poaching, as well as a seasonal influx of pastoralists with large herds of domestic animals. The political situation created by the overthrow of the government in March 2013 has further complicated the situation.

REVIEW OF CONSERVATION ISSUES AND THREATS: The following issues represent specific threats to the ecology, conservation and values of the site.

Livestock grazing. An annual influx of pastoralists with massive herds of domestic animals represents one of the major threats to the ecological integrity of the site. According to the 2010 aerial survey, 280,000 cattle and other livestock were recorded in the park, and it is thought that this number would be significantly higher if the survey had been conducted at the peak of the dry season when transhumant pastoralists converge on the area from wide areas of the Central African Republic, Chad, and Sudan. For comparative purposes, the total number of large wild mammals recorded in the same survey was around 50,000.

Civil unrest and general insecurity. Insecurity, civil conflict and rebel activity have plagued the region for more than a decade, with each new episode serving to further diminish the effectiveness of management and allow heavily armed poachers, miners, rebels and pastoralists to operate freely in the park.

Diamond mining. Small-scale artisanal diamond mining is being practised near the southern edge of the site, but remains a relatively minor, localised problem.

Fire. Fires are a natural part of the savanna ecosystem, but are also used by hunters, pastoralists and local cultivators to drive animals out of cover, improve grazing, and clear land for cultivation. Deliberate fires often get out of control and can threaten natural ecosystem processes.

Oil exploration. Although reliable information on the potential for oil exploration is unavailable, a Chinese oil company, China National Petroleum Corporation (CNPC) established an operational base on the periphery of the park at Gordil in January 2011. It is possible that oil exploration is taking place within the site and/or surrounding protected areas, in which case it may be associated with increased threat of poaching. If confirmed, this would clearly represent a breach of accepted standards for world heritage sites.

The slideshow provides an overview of the Manovo-Gounda St Floris National Park (World Heritage Site In Danger), showing some of the area’s landscapes and wildlife habitats (from the air).