You are here: Home1 / All featured sites2 / Manú National Park

EXPLORE MANÚ NATIONAL PARK with this slideshow, check the location map and get all the facts and information below. 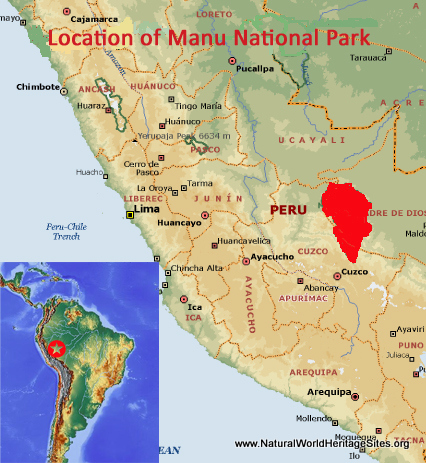 Location and Values: Manú National Park is located on the eastern flanks of the Andes in southwestern Peru.  It extends over a massive area (half the size of Belgium and almost twice the size of Jamaica), and covers an extraordinary range of altitude from the high Andes (above 4,000m) to the lowlands of the Amazon jungle (below 400m).  Within this vast area lies a diversity of major habitats, with alpine puna grasslands above 3,200m (accounting for about 10% of the park’s total area), with densely forested hillsides on the deeply dissected eastern slopes of the Andes (covering half the area), and tropical lowland rainforest on the flat alluvial plains of the Amazon Basin below (about 40% of the park).  It is possibly the most biologically diverse protected area in the world, with 10% of the world’s birds (more than 1000 species), 5% of its mammals (more than 200 species) and 15% of its butterflies (more than 1300 species).

The park is very remote, has no road access, and very limited infrastructure.  It is inhabited by four Amerindian tribal groups whose members live a largely nomadic subsistence hunter-gatherer life, mostly in voluntary isolation.

Conservation Status and Prospects.  According to IUCN’s Conservation Outlook Assessment (2017) the conservation status of Manú National Park is ‘of significant concern’. The IUCN report notes that the land and resource use dynamics have dramatically changed since World Heritage inscription. A quickly advancing development frontier has changed large tracts of a previously remote landscape. Major road infrastructure has been facilitating access and legal and illegal natural resource extraction. This development represents significant threats to the property in the medium and long terms, the effects of which are starting to become visible and are likely to be aggravated by anticipated climate change. Manu National Park is also the only chance for the cultural survival of some of the last completely self-sufficient forest-dwelling peoples in the world. The imminent threats and the absence of an adequate response are cause for significant concern, even if the park still enjoys exceptionally high levels of ecological integrity.

The slideshow ‘tells the story’ of Manu and its biodiversity with a series of photos from the ‘cultural zone’ of Manu Biosphere Reserve. This is an area adjacent to the park’s eastern boundary – that serves as a park ‘buffer zone’ – where access is possible via a dirt road, linking to the river port of Atalaya, with onward travel by boat.  This route traverses the major vegetation zones from the high-altitude puna grasslands through the various forest types on the Andean slopes and onto the alluvial plains of the Amazonian Basin.

The slideshow starts in the tussock grasslands of the mountain pass (at around 4,000m elevation) that marks the extreme south-eastern boundary of the park.  Here the open puna habitat has a conspicuously rich flora, with lupins, orchids and ancient cycad ferns in evidence.  Descending from the mountain pass the grasslands quickly merge into a moss-draped zone of stunted trees in the elfin forest before an extensive zone of cloud forest is reached.  The branches of trees in the cloud forest are characteristically draped in lichens (‘old man’s beard’) and laden with bromeliads, orchids and other epiphytes.  Two highly-prized birds are found here – the metallic-green ‘golden-headed quetzal’ and the stunning orange ‘cock-of-the-rock’ (which puts on a dazzling display where males congregate at breeding leks). More than 50 species of hummingbird have been recorded at Manu, while the diversity of invertebrates (perhaps 500,000 species) remains largely undocumented.  A small selection of the more remarkable invertebrate fauna is shown, including a leaf-like praying mantis, caterpillars and some of the colourful butterflies.

The alluvial lowlands are only accessible by river boat, and the journey downstream continues along the Rio Alto Madre de Dios with stops to explore the forest interior. In the lowlands, the rivers meander, deposit silt and create oxbow lakes, where wildlife can be seen from the water on small rafts.  One such lake is illustrated, with some of the more conspicuous wildlife including black caiman, anaconda, piranha, ‘prehistoric’ hoatzin (bird), and various species of monkeys – black spider, squirrel and saddleback tamarin.  Another wildlife phenomenon that can be seen in Manu is the congregation of hundreds of parrots at mineral licks.  The spectacle may only last an hour each day, but vast numbers of birds congregate at suitable mud cliffs to ingest mineral-rich clays that serve to neutralize the toxins in unripe fruits the parrots consume during the course of the day.  These mineral licks are used by many species, including Blue-headed parrots, and macaws.

The final part of the slideshow illustrates the fauna and flora of the lowland forests, including some further characteristic species that inhabit the area.  The photos include some of the larger mammals (white-lipped peccary (a pig), Amazonian tapir, red howler and monk saki monkeys) as well as some smaller camouflaged denizens of the forest floor.  Finally, some local people and livelihoods in the cultural zone are shown, with additional images of more remote tribal people living in voluntary isolation (from museum images and other publications).