You are here: Home1 / All featured sites2 / Mount Etna

EXPLORE MOUNT ETNA with this slideshow, check the location map and get all the facts and information below. 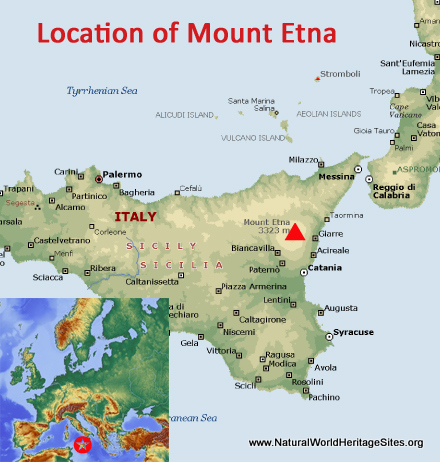 Location and Values: Mount Etna is located in the north-east of the Mediterranean island of Sicily.  It is the most active stratovolcano in the world, exhibiting more-or-less continuous volcanic activity around its summit craters and experiencing frequent lava flows from craters and fissures on its flanks.  It is considered to be an outstanding example of the geological processes involved in volcanism, with a particular diversity and abundance of volcanic features including summit craters, cinder cones, lava flows, lava caves and a massive collapse of the volcano’s eastern flank (known as the Valle de Bove Depression).   The volcanic activity has been observed and documented for at least 2,700 years, with 122 lava flows recorded during historical times since 122 BC.  This gives it immense scientific value and ensures that it will continue to have a major influence on vulcanology, geophysics and other earth science disciplines.

Conservation Status and Prospects.  According to IUCN’s Conservation Outlook Assessment (2017) the conservation status of Mount Etna is ‘good’. The IUCN report notes that ‘the geological values of the site are well-preserved and its Outstanding Universal Value is not threatened at present. Protection and management of the site are mostly effective; however, some concerns exist regarding the current levels of staffing and funding. Additional financial and technical support could help improve visitor facilities and environmental education programmes. Mount Etna remains one the best-studied volcanoes in the world, however, the capacity of the site management and other institutions to sustain ongoing monitoring and research needs to be strengthened.’

The slideshow starts with some of the volcanic features on the southern mid-slopes around Rifugio Sapienza (1,923m).  Here, a recent lava flow has engulfed a house, with only the top of the roof seen above ground level.  Some perfectly-shaped cinder cones punctuate the flanks of the mountain and provide some excellent vantage points and hiking trails around a series of crater rims and ridges, while lava flows from different periods are visible in all directions.  The Rifugio serves as a base for a cable car which transports visitors half way up the mountain, connecting with 4WD buses which traverse much of the remaining distance towards the summit.  Hiking to the active summit craters is restricted and may only be done as part of an organized group with an experienced local guide. So most visitors to the higher bus drop-off point explore the cinder cones below the summit, which are wonderfully scenic in themselves, and provide excellent views (on a clear day) of the active summit craters in the distance.

The photos feature an ascent of the southern slopes on foot, passing lava flows that seem, in places, to be still in motion.  Great drifts of snow covered in piles of light volcanic ash driven by the strong winds are shown, adjacent to the mighty chasm of the Valle del Bove.  In the early morning mists an isolated mountain hut makes a forlorn sight, but as the sun burns through, the majesty of the mountain and the rich red and yellow colours of its volcanic elements contrast with the bright blue sky.

The second part of the slideshow illustrates, briefly, some of the vegetation communities on the lower (southern and eastern) slopes of the mountain (which are protected within a buffer zone), including mixed oak forests at lower elevations, merging with birch and Corsican pine forests at higher elevations.  The northern slopes of the mountain are accessed from Piano Provenzana, and the slideshow features this route to the summit craters, as part of a guided group tour.  There are four active summit craters, filled with swirling steam and belching, periodically, great plumes of grey ash.  Around the crater rims are contorted lava bombs and fumeroles where colourful deposits of sulphites and bromides can be seen.  A descent of the mountain on foot is exhilarating, as the loose rounded particles underfoot allow a safe ‘run’ through the high alpine desert, at least until the zone where cushion mounds of Astragalus vegetation get a hold.