You are here: Home1 / All featured sites2 / Natural System of Wrangel Island Reserve

EXPLORE the Natural System of Wrangel Island Reserve with this slideshow, check the location map and get all the facts and information below. 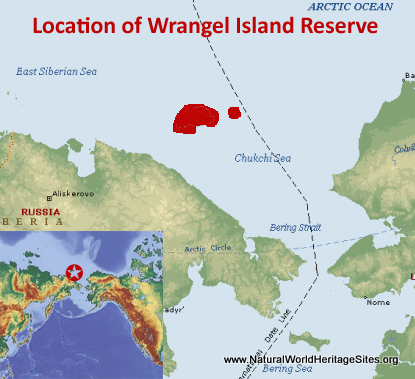 Location and Values: The Natural System of Wrangel Island Reserve includes Wrangel Island (7,608 km2), nearby Herald Island (11 km2) and the surrounding waters (11,544 km2). The site is located in the high Arctic tundra off the north-east coast of Siberia and has the highest level of biodiversity in the high Arctic. This high level of biodiversity is attributed to its long evolutionary history uninterrupted by the glaciations that affected most parts of the high Arctic elsewhere. The islands once formed part of the ancient land bridge between Asia and North America and their present-day flora and fauna reflect this ancient ancestry with elements from both continents. Wrangel Island supports the world’s largest population of Pacific walrus, as well as substantial populations of polar bears and snow geese. The waters around the islands serve as an important feeding ground for gray whales (migrating from Mexico) and beluga, as well as other marine mammals. Woolly mammoths lived here until about 4,000 years ago, the world’s last surviving population, and their tusks and bones are found in the island’s tundra and permafrost.

Conservation Status and Prospects. According to IUCN’s Conservation Outlook Assessment (2020) the conservation status of the Natural System of Wrangel Island Reserve is of ‘significant concern’. The IUCN report recognizes that the site is currently well protected and in a stable, pristine condition, while highlighting a number of potentially serious threats. The most prominent of these is climate change, which is thought likely to bring profound changes to the Arctic tundra ecosystem, changes in the vegetation and melting of sea ice (which may impact polar bear and walrus populations which depend on ice platforms to feed). Other potentially damaging developments that may occur in future include military infrastructure development on the island, development of tourism, oil and gas exploration and pollution from increased shipping as previously frozen seas become more navigable.

The slideshow ‘tells the story’ of the Natural System of Wrangel Island Reserve with a portfolio of photos that illustrate the landscape features of the islands and their rich terrestrial and marine wildlife. A large part of the portfolio was contributed In Memoriam of Ngaire Hart, one of very few visitors allowed access to the interior of Wrangel Island (which is designated as a strictly protected ‘Zapovednik’, excluding practically all human activity except scientific research). The slideshow starts on the southern shore where there are a small number of semi-derelict timber buildings and an observation tower. A flock of snow geese is shown passing overhead and phalaropes and ducks can be seen in the inshore waters. For most of the year, the surrounding waters are frozen, allowing polar bears to hunt for seals from the ice platforms while Pacific walruses can be seen in more open waters and elsewhere in massive rookeries. Photos of a bearded seal on the ice and beluga whales underwater are included, followed by arctic terns, snow geese and reindeer (the ancestors of animals introduced to the island by settlers in the 1950s).

The second part of the slideshow illustrates the island’s interior, as recorded by Ngaire Hart from a special 6-wheel drive vehicle with wide deflated tyres, capable of crossing the unmarked tundra. This series of photos demonstrates the magnificent landscapes and diverse tundra flora that can be seen over a brief period in the peak of summer (noting that this is an island of harsh blizzards, two months of polar night (i.e. perpetual winter darkness), where precipitation falls as snow and only a short period of 2-3 weeks in mid-summer is free of frost). A ramshackle ‘scientific base camp’ shelter is shown, with mammoth tusks and bones accumulated on the ground outside, and the occasional glimpse of wildlife – a snowy owl, a group of musk ox (introduced from Canada in 1975) an arctic fox, as well as a snow bunting, Baird’s sandpiper and red phalarope.
The slideshow finishes by returning to the marine and coastal areas with photos of king eider, the cliffs of Herald Island, humpback whales and a couple of the seabird species that congregate in large sea-bird colonies – horned puffin and thick-billed guillemot. A polar bear den, a walrus rookery and a photo of the night-time display of the Aurora borealis complete the slideshow.

Migratory Bird Sanctuaries along the coast of Yellow Sea-Bohai Gulf of Chin...
Scroll to top