You are here: Home1 / All featured sites2 / Ngorongoro Conservation Area

EXPLORE TANZANIA’S NGORONGORO CONSERVATION AREA with this slideshow, check the location map and get all the facts and information below. 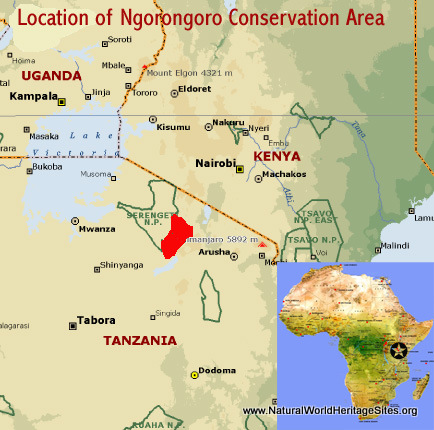 Values: Ngorongoro Conservation Area is one of Africa’s most important wildlife areas and a bold experiment in multiple land use. At its core is the world famous Ngorongoro Crater – a giant caldera in which the dramas of life on the African plains are played out each day by a diverse assemblage of large mammals – wildebeest, zebra, lion and rhino – in a primeval ‘garden of Eden’. Beyond the crater rim, Maasai pastoralists herd their cattle across the plains, seemingly oblivious to the herds of wild animals sharing this vast landscape, the ‘endless plains’ of Serengeti. Lake-filled Empakaai crater and the active volcano of Oldonyo Lengai are nearby. The area is also of great significance in tracing the origins of mankind with excavations in the Oldupai Gorge and Laetoli, resulting in discoveries of fossil remains of Homo habilis, and 3.5 million-year old human footprints. A comprehensive review of the world heritage values of Ngorongoro Conservation Area is provided below, together with details of the area’s conservation status and the threats it faces.

REVIEW OF WORLD HERITAGE VALUES: The specific attributes which qualify Ngorongoro Conservation Area for world heritage status can be summarised as follows:

Greatest mammal migration on Earth: Ngorongoro Conservation Area is a key component of the wider Serengeti ecosystem which supports the greatest large mammal migration on Earth, involving approximately 2 million wildebeest, zebra and Thomson’s gazelle, accompanied by 7,500 hyenas, 3,000 lions and other predators. The annual migration follows a 1,000 km circuit between key dry-season water points and grazing lands along the Mara river (in Kenya’s Maasai Mara Reserve) and short-grass pastures of the Serengeti National Park to the southern calving grounds in the Ngorongoro Conservation Area.

Outstanding scenery: The Ngorongoro area, more than any other part of the Serengeti ecosystem offers spectacular scenery including the magnificent volcanic craters of Ngorongoro, Empakai and Olmoti, as well as extensive short-grass plains punctuated by impressive outcrops of massive weathered granite ‘kopjes’, seasonal wetlands, river gorges, low hills and a diversity of forest and woodland types.

Outstanding geomorphic features and ongoing geological processes: Ngorongoro Crater is the largest unbroken caldera in the world, part of the volcanic highlands along the western flank of the Great Rift Valley. The area has been geologically active since the late Mesozoic/early Tertiary periods and includes a complex of unparalleled geomorphic and geological features including two other dormant volcanic craters (Olmoti and Empakaai), seasonal rivers whose erosive forces have exposed important paleaontological finds (in Olduvai and Laetoli gorges), and wind-blown ‘shifting’ sand-dunes. Periodic eruptions of a nearby volcano (Oldonyo Lengai) bring a dusting of volcanic ash, enhancing the fertility and productivity of the short-grass plains.

Dynamic complex of on-going evolutionary processes: The complex geology and altitudinal range (from around 1,000 metres on the shores of Lake Eyasi to 3,600 metres on the highland summits) combine to create an extraordinarily diverse ecology. On-going volcanic activity associated with the Great Rift Valley, high rainfall in the crater highlands and pressures associated with the high human and domestic livestock populations contribute to a dynamic and ever-changing environment.

Complex and complete mammalian community: The mammalian community is the most diverse and complex savanna community on Earth, including 1.3 million wildebeest, 0.6 million zebra, 0.9 million Thomson’s gazelle and large numbers of other species such as buffalo, eland, topi, giraffe, warthog, elephant, hippopotamus, and black rhino. The complex community of large grazing mammals is accompanied by an equally impressive diversity of large and small predators including as many as 7,500 hyenas, 3,000 lions, 1,000 leopards, 225 cheetahs and wild dogs.

Diversity of other fauna and flora: The area’s flora and fauna has not been systematically surveyed, but species diversity is expected to be high for a wide range of taxa. Ngorongoro lies within one of the world’s Endemic Bird Areas, with over 500 bird species recorded.

CONSERVATION STATUS AND PROSPECTS: The large size of Ngorongoro Conservation Area and its location at the southern end of a trans-boundary complex of protected areas (which together cover most of the wider Serengeti ecosystem) should ensure the long-term protection of its values. Tourism brings substantial financial benefits which support management of the area and provide substantial benefits to its large resident pastoralist population. The main long-term concern is that the area’s human population continues to increase, exerting unsustainable demands on natural resources and causing irreversible degradation.

MANAGEMENT EFFECTIVENESS: The Ngorongoro Conservation Area benefits from a strong policy and legislative environment which allows the management authority (Ngorongoro Conservation Area Authority, NCAA) to raise and retain revenues from a rapidly growing number of visitors, whilst enabling the Maasai resident population to pursue a traditional pastoralist lifestyle that is favourable to wildlife. Funds generated by NCAA (US$ 31 million in 2007) have been used to strengthen protection and management of the area, and provide substantial benefits to the resident pastoralist population (almost 80,000 people). Although there are still some shortcomings this is a well managed conservation area, maintaining a high degree of ecological integrity.

REVIEW OF THREATS: The following issues represent specific threats to the ecology, conservation and values of the Ngorongoro Crater world heritage site.

High, increasing resident human population: The resident pastoralist population of the area has increased progressively from around 8,700 in 1966 to 20,000 at the time of inscription on the world heritage list (1979), and stood at around 76-79,000 in 2012. This is partly the result of immigration into the area as people from elsewhere are attracted by the relatively favourable living conditions, livestock and health services and job opportunities. The population creates demands for living space and environmental services which are in direct competition with wildlife and lead inevitably to environmental degradation.

Development of physical infrastructure for resident population: Traditional Maasai homesteads and livestock enclosures are constructed from poles and sticks, cattle dung, mud and hides. The demands of a growing human population have lead to unsustainable use of these materials from the local area and associated habitat degradation. Furthermore, as traditional building techniques give way to more modern construction methods, untidy trading centres have developed and grown, with consequences for the aesthetic and landscape values of the property.

High domestic stock numbers and over-grazing: The number of domestic livestock (cattle, sheep and goats) has remained fairly constant at around 300,000 Tropical Livestock Units for at least a couple of decades, with periodic reductions driven by drought. This level of over-stocking results in degradation of the grazing lands in favour of unpalatable species and the spread of ‘weeds’.

Use of road as through-route: The main murram road through the centre of the conservation area (from Lodoare to Naabi Hill gates) serves as a through-route for buses, trucks and other commercial traffic linking Arusha and other towns of northern Tanzania with Musoma and the fertile lands of the Lake Victoria Basin. A recent, highly controversial, proposal involved construction of a tarmac road through northern Serengeti from Musoma to Arusha via Tabora ‘B’ (park gate) and Klein’s Gate, but this has now been abandoned. Conservation groups have urged the development of a route which would pass to the south of the entire ecosystem, thus reducing traffic through Ngorongoro and Serengeti.

Subsistence poaching: Poaching is primarily for meat, taken at subsistence levels. Populations of most target species are stable or increasing and poaching is not thought to be affecting their overall viability.

Illegal logging: There has been a recent spate of illegal logging for Sandalwood (Osiris lanceolata) but logging is not considered to be a major threat.

Tourism infrastructure development: There are currently six lodges inside Ngorongoro Conservation Area , four of which are sited on the rim of Ngorongoro Crater (Serena, Sopa, Crater and Wildlife lodges), one set back from the crater rim (Rhino lodge) and one at Lake Ndutu. A recent proposal for an additional lodge (Kempinski) on the crater rim was not approved, and it is the authorities’ policy to distribute any future developments in other areas. All lodge developments are subject to environmental impact assessment procedures and environmental audits are currently being undertaken for existing lodges to ensure that they comply with international best practice in respect of environmental management. Apart from the lodge infrastructure, the road network used for game viewing is limited, and much of it is heavily used, especially the roads in and around Ngorongoro Crater itself.

Tourist numbers, distribution and carrying capacity: NCA received almost 600,000 visitors in 2011 and is one of the most intensively visited conservation areas in Africa. Visitors tend to concentrate around the world famous Ngorongoro Crater, which covers less than 5% of the total area and could easily become congested. Measures are being taken to limit access to 50 vehicles inside the crater at any time by applying a high vehicle access fee (currently US$200) and limiting the duration of each visit to 6 hours.

Fire: Although the Serengeti ecosystem is adapted to fire, hot burns (which occur at the end of the dry season) can cause extensive long-term damage to woody vegetation. Fire is used by resident pastoralists to improve grazing for domestic stock, minimize tick loads and help in the collection of wild honey – and can easily get out of control.

Disease transmission between domestic animals and wildlife: Disease transmission between domestic stock and wildlife can be catastrophic in an area of co-existence like Ngorongoro. The present population of 1.3 million wildebeest is the result of long-term recovery from a rinderpest outbreak, transmitted by cattle, which had decimated the population. NCAA assists with inoculation of domestic stock, provision of dipping tanks etc, and disease surveillance.

Invasive plants: Several invasive alien weed species are already established in the Ngorongoro area including the red water fern, Azolla filiculoides; Mexican Poppy, Argemone mexicana, Mauritius Thorn, Datura stromium and the highly aggressive and damaging weed Parthemium hysterophorus. A strategic plan for the control of invasive plant species has been developed and good progress reported in the implementation of measures to control Azolla, Argemone and Datura.

Human-wildlife conflict: Human-wildlife conflict occurs when livestock is lost to wild predators and/or crops are damaged by wildlife inside the conservation area or along its boundaries. Fortunately, the Maasai people have a long history of living alongside wildlife, and an acceptable level of tolerance prevails.

Insufficient funding for management and over-dependence on tourism revenue: Although NCAA was reported to manage a budget equivalent to US$31 million in 2007, there are evidently many unmet management needs. These include several big investment items such as completion of a new staff housing and management complex outside the boundary; upgrading of roads (especially within the crater); provision of social infrastructure to encourage voluntary resettlement of people outside the conservation area. Furthermore, NCAA receives most of its revenue from foreign visitors and would be under extreme financial stress in the event of a downturn in tourism.

The slideshow provides a comprehensive overview of Tanzania’s Ngorongoro Conservation Area showing the area’s spectacular savanna landscapes, volcanic craters and wildlife habitats. Some of the characteristic plants and animals are shown, including the massed herds of wildebeest and zebra that take part in the great Serengeti migration, as well as other large mammals – such as elephants, buffalo, lions, and rhinos – many of which are threatened species. The slideshow illustrates some of the conservation management issues as well as the traditional lifestyles of local Maasai communities living in the area and typical visitor safari experiences. Finally, the fossil evidence of our hominid ancestors discovered at Olduvai gorge, and the rich mammalian fauna that existed in the area millions of years ago is illustrated with photos of exhibits at the small Olduvai museum.