You are here: Home1 / All featured sites2 / Okapi Wildlife Reserve

EXPLORE CONGO’S OKAPI WILDLIFE RESERVE with this slideshow, check the location map and get all the facts and information below. 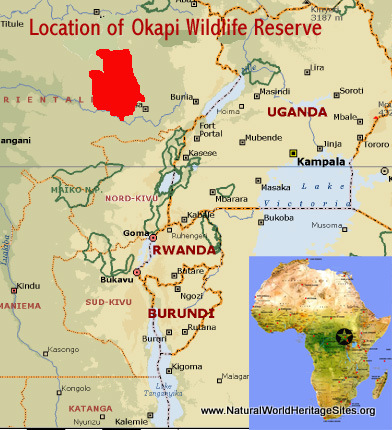 Values: The Okapi Wildlife Reserve covers about a fifth of the ancient Ituri Forest in north-eastern DRC – an area which survived as rainforest during the last Ice Age, and consequently became a ‘centre of endemism’ from which species spread as the climate warmed and forests expanded. It is an area of exceptionally high biodiversity, with more diurnal primate species than any other African forest (13spp) and a high level of species endemism. Its main claim to fame, however, is as the home of about 20% of the world’s okapi – an extraordinary ‘forest giraffe’ only discovered in 1901 and only known from the DRC. The reserve is inhabited by traditional pygmy hunter-gathering people of the Mbuti and Efe ethnic groups.

REVIEW OF WORLD HERITAGE VALUES: According to IUCN’s Conservation Outlook Assessment (2014), the specific attributes which qualify the Okapi Wildlife Reserve for world heritage status can be summarised as follows:

Exceptionally high biodiversity. The area supports an exceptionally diverse present-day flora and fauna due to its very long term ecological stability and persistence as an area of humid tropical forest during the Pleistocene era,. The reserve encompasses a variety of specific habitat types over an altitudinal range of 600 m to 1,200 m including swamp forest, mixed evergreen forest, mono-dominant forest (characterised by stands of a single tree, Gilbertiodendron deweveri), forest clearings (locally known as edos) and giant granite rock outcrops (inselbergs) protruding above the tree canopy. The reserve (and adjoining parts of the Ituri Forest) is best known internationally as the home of the endemic okapi (Okapia johnstoni, a forest giraffe) as well as other endemics such as the aquatic genet (Osbornictis piscivora) and giant genet (Genetta victoriae). Inselbergs provide a unique microclimate for specially adapted plant species including the endemic giant cycad Encepholarcus ituriensis. The recorded fauna includes 101 mammal species (of which 17 are primates) as well as 376 species of birds (including two endemic species of weaver bird).

Habitat for important populations of rare and endangered species. The reserve’s most iconic animal is the okapi which is endemic to the DR Congo, and adopted as the national symbol. At the time of inscription as a World Heritage Site the reserve’s okapi population was estimated at 5,000 but a survey in 2006 suggests that it probably halved during the following decade as a result of poaching associated with civil unrest. Amongst the reserve’s other rare and endangered species, was an estimated 4,000 forest elephants in 1995 (although this population has also been significantly reduced by poaching in subsequent years), as well as some 7,500 chimpanzees.

CONSERVATION STATUS AND PROSPECTS: Although the reserve’s main habitats remain largely intact, poaching has had a severe impact on populations of key mammal species, including okapi and forest elephant. The management authority (ICCN) faces many challenges and its ability to respond is severely constrained by the activities of armed militia groups active within the reserve. Many of the principal threats to conservation arise from an ever-increasing number of immigrant settlers arriving in the area from the over-populated highlands that lie to its east. These settlers are clearing new land for agriculture within the reserve’s ‘village enclaves’, while commercial hunting for bushmeat, illegal mining and logging (in the buffer zones) are also increasing. Strong political leadership at all levels of government is required to enable the management authority to regain full control of the reserve and ensure its long-term conservation. In view of the rapid expansion of (authorised) village settlements within the reserve, a fully protected core area with National Park status should be created as a matter of urgency.

MANAGEMENT EFFECTIVENESS: The effectiveness of management is severely constrained by broader issues of national security, and especially the presence of armed militia and some ‘rogue elements’ of the Congolese army operating within the reserve. These groups are engaged in commercial poaching, illegal mining and other activities that are largely beyond the control of ICCN, the conservation management authority. Furthermore, staff morale and effectiveness within ICCN has been severely impacted by a recent (2012) attack on the park headquarters at Epulu, which involved the murder of staff and destruction of most park headquarters infrastructure. On a more positive note, the reserve benefits from the commitment of dedicated long term international partners and there has been successful recent collaboration with the Congolese army in anti-poaching operations and controlling illegal mining. With necessary political commitment the reserve’s conservation values can be restored and sustained.

REVIEW OF CONSERVATION ISSUES AND THREATS: The following issues represent specific threats to the ecology, conservation and values of the Okapi Wildlife Reserve world heritage site.

Pygmy hunter with a forest duiker (destined for the commercial bushmeat market). Rehabilitaion of the main road through the Okapi Wildlife Reserve had facilitated access to urban markets and greatly increased pressure on the reserve’s wildlife

Commercial hunting. Poaching of forest elephants for ivory is being carried out by armed militia groups and uncontrolled elements of the Congolese army (FARDC). Hunting for the commercial bushmeat trade is also intense, and has increased significantly since the rehabilitation of a national road (RN4) through the core of the reserve in 2008. This has resulted in (a) much more meat being sold in roadside restaurants in and around the reserve and (b) bushmeat being transported much more easily, and in greater quantities, to distant urban markets. Indigenous semi-nomadic pygmies and local Bantu people are involved in the commercial hunting, as are hunters from outside the area. Wildlife surveys carried out by the New York-based Wildlife Conservation Society (WCS) in 1995, 2006 and 2011 have clearly demonstrated a progressive reduction in wildlife abundance for all key species, particularly along the main road through the core of the Reserve. There is a very high risk that this trend will continue.

Civil unrest and military activities. Persistent civil unrest and related military operations continue to threaten the reserve. Armed groups operate lucrative illegal poaching and mining activities in the reserve, largely beyond the control of the management authority (ICCN). They have undertaken several fatal armed assaults on park staff and infrastructure in recent years. At least three armed militia groups (Simba, Kumu, Rombi) operate in the reserve. On June 25th 2012 one of these groups (the Simba) attacked the Reserve headquarters killing seven people, destroying buildings and equipment and killing all 15 of the reserve’s captive okapi. This was in retaliation for increased anti-poaching efforts by ICCN, carried out with the help of the national army (FARDC) over the previous six months. Following the assault, ill-disciplined elements of the Congolese army continued to loot the station and village for several days. A further attack took place in January 2013 when the Zunguluka patrol post was destroyed. Clearly these sorts of assaults not only disable ICCN staff through destruction of facilities but also have a severe impact on staff morale.

Artisanal mining. Small-scale (illegal) artisanal mining of gold and coltan occurs in the southern section of the reserve and its peripheral zones. Mining operations involve large numbers of miners, excavating mineral-rich water courses with hand implements. Although the direct impact of such activities is relatively local, downstream siltation and pollution of water courses is a problem and the presence of large numbers of people within the reserve results in ‘collateral damage’ resulting from tree-felling, hunting and agriculture associated with illegal mining camps.
A public notice in one of the village enclaves shows the legal limits of the village and lists the activities which are allowed in different designated management zones. The high rate of settlement by new immigrants into the reserve presents a real treat to these regulations.

A public notice in one of the village enclaves shows the legal limits of the village and lists the activities which are allowed in different designated management zones. The high rate of settlement by new immigrants into the reserve presents a real threat to these regulations

Establishment and expansion of village enclaves. The reserve management plan provides for 27 agricultural zones around villages that existed within the boundaries of the reserve when it was created. Some of these villages have experienced high levels of immigration resulting in excessive forest clearance for agriculture beyond the designated enclave area. Given the continuing pressure of immigration to the area, there is a very high risk that this will result in further loss of land from the core area of the reserve, especially along the main (RN4) road which bisects it.

Timber production. Although most logging is presently undertaken outside the reserve, pressure on timber resources within its boundaries is likely to increase as timber resources are progressively depleted elsewhere. The rehabilitation of the main road has resulted in a massive increase in the volumes of illegally logged hardwoods being transported through the reserve to markets in neighbouring countries (Uganda, Rwanda, Kenya), and the potential for illegal logging within the reserve is clearly a threat to the future integrity of the reserve.