You are here: Home1 / All featured sites2 / Pantanal Conservation Area

EXPLORE BRAZIL’S PANTANAL CONSERVATION AREA with this slideshow, check the location map and get all the facts and information below. 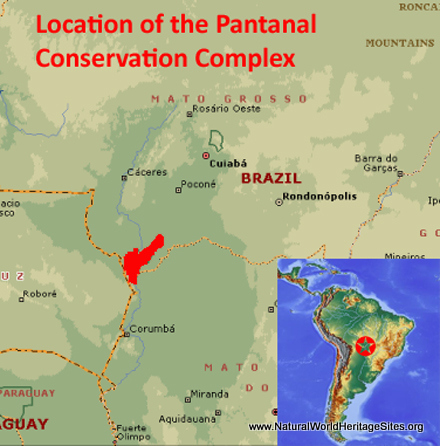 Location and Values: Brazil’s Pantanal Conservation Area protects a small part of one of the world’s most extensive freshwater wetlands. It includes four contiguous protected areas, namely the Pantanal Matogrossense National Park and three adjoining private reserves (Doroche, Acurizal and Penha). Although it covers only a small part of the Pantanal it includes the most spectacular and diverse area, where permanent waters, flooded savannas and the dry Amolar Mountains converge.

Conservation Status and Prospects. According to IUCN’s recent Conservation Outlook Assessment there is significant concern over the conservation status of this site. The IUCN report notes that ‘the site has a relatively effective management system. However, major current threats from sedimentation and pollution, and projected threats from harmful land use change, climate change and the construction of multiple dams upstream of the site are major issues that cannot be dealt with at a site level. The natural hydrological regime of the site has already been destabilized and further land use change and hydropower development upstream will alter natural phenomena even more.’

The slideshow ‘tells the story’ of Yakushima with a portfolio of photos by Sue Stolton and Nigel Dudley (Equilibrium Research) from a visit in November 2007. They illustrate the landscape features of this outstanding place, and a number of the ancient Japanese cedar trees, together with some of the other typical plants and animals. Some of the visitor information panels and facilities are shown as well as features of the wider landscape outside the site.