EXPLORE RÍO ABISEO NATIONAL PARK with this slideshow, check the location map and get all the facts and information below. 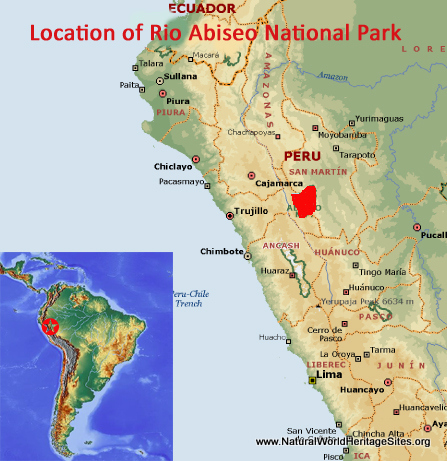 Location and Values: Río Abiseo National Park is located on the eastern slopes of the Andes in northern Peru, covering an exceptionally wide range of altitude (from 350 to 4,349m). It is a mixed site of outstanding importance for its biodiversity, which also protects a number of important recently-discovered archaeological sites covering 8,000 years of human settlement.

The park’s importance for biodiversity is derived from the complexity of its habitats, with about a quarter of the area lying in the puna grassland zone of the high Andes, while half of it (on the Andean slopes) is covered in cloud forest and the remainder comprises sub-montane and lowland rainforest.  Research suggests that the exceptional present-day biodiversity values of this comparatively small area may also be due to its role as a ‘refuge’ for forest species during the last ice age when forests elsewhere disappeared under changing climatic conditions.  This ‘Huallaga Pleistocene Refugium’ allowed forest-adapted species to survive the ice age here, and for the processes of adaptation and evolution to continue uninterrupted.  The park’s flora and fauna includes a large number of endemic species, with at least seven species of mammal and six birds threatened with extinction (most notably the yellow-tailed woolly monkey, recently re-discovered and known only from Rio Abiseo).

Conservation Status and Prospects.  According to IUCN’s Conservation Outlook Assessment (2017) the conservation status of Río Abiseo National Park is ‘good, with some concerns’. The IUCN report notes that Rio Abiseo National Park is well preserved and none of the values ​​for which it was recognized as a world natural heritage site has been altered: biodiversity and endemic or threatened species remain well preserved, the functioning of ecosystems continues to be natural, landscapes remain intact and the cultural and archaeological values ​​are well protected. But there is concern for the future. Although the Park remains in good condition, the management could be much better prepared to address present and future threats. The main problem is the chronic budget shortfall, and the need for additional personnel, better training and, especially, better and more intense interaction with local communities.

The slideshow provides an insight into the lowland rainforest portion of the park, and the diversity of flora and fauna it supports.  There are no roads into the park and most of it has been closed to visitors since 1986, in the interests of maintaining the important archaeological sites free of any kind of disturbance until they can be properly investigated and managed.  Access by motor boat along the Rio Abiseo, in the extreme north-eastern portion of the park, has recently been authorized through one concessionaire, for guided groups of visitors.  The slideshow features one such trip, entering the park at the riverside Churo Ranger Post.  From here it is possible to continue upstream for a few kilometers and make some short excursions through the forest on foot, visiting a number of small waterfalls and caves.  However, it must be noted that ecotourism in Rio Abiseo National Park is at a very early stage of development and even access by boat is severely constrained by the nature of the boulder-strewn fast-flowing rivers which quickly become un-navigable.

The slideshow shows a variety of the fauna and flora seen in the reserve or known from the area.  Some of the photos were taken at Hauchipa Zoo (Lima), and two facilities in the nearby town of Tarapoto – an orchid farm and animal rescue centre run by Urku, a local NGO.  These photos provide a sense of the extraordinary biological diversity and range of species inhabiting the Rio Abiseo National Park. The slideshow is completed with some photos of exhibits in the excellent park interpretation centre in the small riverside town of Huicungo, the departure point for trips upriver into the park.  The exhibits include photos of some of the ancient structures at Gran Pajaten, the most important of the archaeological sites, which was only ‘discovered’ in 1963.