You are here: Home1 / All featured sites2 / Salonga National Park

EXPLORE CONGO’S SALONGA NATIONAL PARK with this slideshow, check the location map and get all the facts and information below. 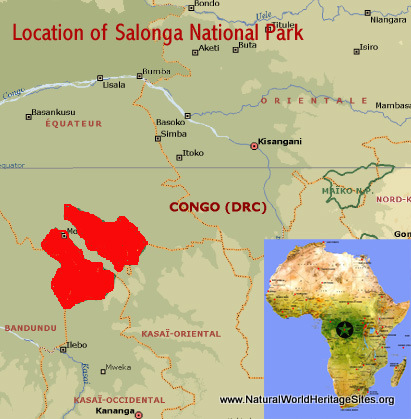 Values: Salonga is the world’s second largest tropical rainforest national park and the largest in Africa. It is extremely isolated in the centre of the Congo River basin, accessible only by water or air. It is the habitat of many endemic endangered species, notably the bonobo (pygmy chimpanzee), the Zaire peafowl, the forest elephant and the African slender-snouted crocodile. Tall equatorial forest trees cover most of the area, the forest varying in composition according to geomorphology. Most of the area is low-lying, swampy ground below 500 m, but drier forest communities occur on terraces and plateau with occasional grassy clearings. Recent invasion by militias has brought heavy poaching for bushmeat and ivory. With the four other World Heritage Sites in the D.R.C., Salonga now benefits from a UNESCO project financed largely by the United Nations Foundation, to provide for the training and equipment of staff as well as for protection of the country’s bio-diversity.

REVIEW OF WORLD HERITAGE VALUES: The specific attributes which qualify Salonga National Park for world heritage status can be summarised as follows:

Vast area of intact lowland tropical rainforest. With a total area of 36,000 km² Salonga National Park is by far Africa’s largest area of protected lowland tropical rainforest. Furthermore it is considered to be practically virgin, unaffected by human activities and largely unexplored. It therefore represents one of Earth’s last great wilderness areas.

Exceptional example of biological evolution and the adaptation of life forms in a complex equatorial rainforest environment. The large size of the park ensures the continued evolution of biotic communities resulting from natural processes such as river bank erosion and the constantly changing course of river channels. Species of plants and animals are in a perpetual state of interaction and ‘keystone’ species such as elephants play vitally important roles in maintaining the forest’s ecological dynamics – for example, by helping to maintain the characteristics of understory vegetation important for bonobo nesting.

Habitat for half the world’s bonobos. Salonga National Park is the most important site in the world for conservation of the dwarf chimpanzee or bonobo (Pan paniscus), one of humankind’s closest living relatives. Although reliable survey data is not available an estimated 14,000 bonobos – roughly half the world total – are thought to inhabit Salonga.

Habitat for exceptional numbers of other rare and endangered species. Salonga provides habitat for many other rare and endangered species such as Congo peacock, forest elephant and African slender-snouted crocodile. The vast size of the park means that it remains a very important stronghold for forest elephants, despite the recent surge in poaching which has clearly reduced the population significantly.

CONSERVATION STATUS AND PROSPECTS: Salonga has been on the official list of World Heritage In Danger since 1999, and continues to suffer the adverse effects of commercial poaching and encroachment, which the management authority has been unable to halt. Nevertheless, the park is sufficiently large and inaccessible that it can withstand some degree of human use – legal and illegal – and its key species and wilderness qualities remain largely intact. Forest elephants and bonobos have, however, been severely reduced through poaching for ivory and the bushmeat trade, and localised deforestation is taking place around the periphery of the park as a result of slash-and-burn agriculture. In the medium to long-term it is necessary for law enforcement to be very significantly improved and for communities living in and around the park to be effectively integrated into its management. This will require more staff, with better training and equipment, greatly increased funding levels, and strong political leadership.

MANAGEMENT EFFECTIVENESS: Protection and management are still very weak with staff and funding levels far short of what is needed for effective protection of such a large area. The park is only accessible in a few locations by air, or along its rivers by pirogue. This presents particular logistical challenges for management, while liaison with local communities is complicated by the fact that the park straddles four different provinces, each with its own administration and development priorities.

REVIEW OF CONSERVATION ISSUES AND THREATS: The following issues represent specific threats to the ecology, conservation and values of Salonga world heritage site.

Poaching/commercial hunting. The biggest single threat to the park is commercial poaching for ivory and bushmeat. This affects most of the larger species and may be very intense, leading to significant reductions in wildlife populations in some localities. The Congolese military and local government personnel are known to have been heavily involved in this illegal activity for many years.

Agricultural encroachment. A significant threat to the park is deforestation resulting from slash-and-burn agriculture. Six percent of the area was affected by this in 2003, with forest clearance most intense in two distinct geographical areas occupied by different ethnic groups. In the southern block eight Iyaelema villages along the old Anga-Munja road are expanding into the forest in this way, while the Kitawalistes people are encroaching the north-eastern part of the northern block. Interestingly, although this clearance clearly impacts the ecology of the forest, bonobos appear to be benefitting from their proximity to these villages, with higher-than-normal population densities recorded as a result of local taboos against killing these animals.

Civil unrest, insecurity and military presence. Some undisciplined elements of the national army (FARDC) have been involved in illegal hunting for ivory and the commercial bushmeat trade over quite long periods of time and with significant impact on wildlife populations in the park. In addition the park suffered from an armed insurgency in 2011 when a rebel group established a quasi-independent administration over parts of the park, which the management authority was unable to access and control. This has now been resolved with army assistance.

Illegal Fishing. Illegal fishing is widespread in the park, and destructive methods are used (including dynamite and poison), causing significant collateral damage to aquatic ecosystems. The rivers are easily navigable for great distances into the core of the park, and fisherman often carry out bushmeat hunting and elephant poaching while they are on ‘fishing expeditions’.

Ecological separation of areas. Salonga is divided into two separate blocks by a major river and 25km-wide strip of unprotected land. This area is being progressively cleared and settled, and there is now only one remaining part of the corridor that provides an ecological link between the northern and southern blocks of the park.

Oil exploration. A potential threat to the park comes from oil exploration. Although no concessions have yet been granted, concession blocks have been identified and these may be offered for tender in future. The environmental effects of oil exploration and/or exploitation could be very serious for the site (resulting in pollution, forest clearance, and high levels of immigration into the area).

Human-wildlife disease transmission. Although there have been no incidences to date it is known that humans and apes are susceptible to many of the same illnesses and there is a risk that interactions betweenresearchers/visitors/tourists and bonobos may cause disease transmission and pose a risk to ape populations. This potential threat is being monitored by researchers in the park.