You are here: Home1 / All featured sites2 / Selous Game Reserve

EXPLORE TANZANIA’S SELOUS GAME RESERVE with this slideshow, check the location map and get all the facts and information below. 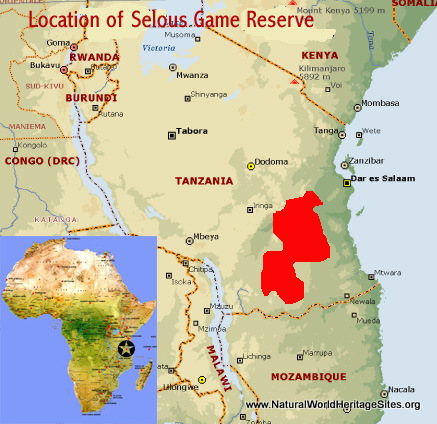 Values: Selous Game Reserve is one of the largest protected areas in Africa – a vast wilderness in southern Tanzania, covering an area slightly larger than Switzerland. The landscape is generally flat with rolling hills and alluvial valleys, ranging in altitude from around 80 to 1,300 metres, and supporting a range of woodland communities, thickets, gallery forests, swamps and alluvial floodplains. It supports vast herds of elephants, buffaloes, giraffe, hippopotamuses, ungulates, crocodiles and other species, and is one of the last strongholds of the black rhino. A comprehensive review of the world heritage values of Selous Game Reserve is provided below, together with details of the area’s conservation status and the threats it faces.

Large undisturbed wilderness area: The Selous Game Reserve (SGR) is one of the largest undisturbed wilderness areas in Africa, occupying approximately 50,000 km2 of southern Tanzania that is free of human settlement, grazing or cultivation. It is located within a wider ecosystem of adjoining protected areas and community Wildlife Management Areas allowing free movement of elephants and other large herbivores over an area of some 90,000 km2, with further connectivity to the Niassa Game Reserve (42,000 km2 ) in northern Mozambique. The size and complexity of this extensive protected area complex ensures the functioning of on-going ecological and biological processes.

Globally significant populations of large mammals: The Selous Game Reserve supports some of the largest remaining populations of Africa’s iconic mega-fauna, including (at the time of world heritage inscription) more than 100,000 elephants, 200,000 buffalo, 2,000 black rhino, 18,000 hippopotamus and a healthy population of wild dog. Approximately 750,000 large mammals of 57 species were recorded in 1986.

Diversity of mammals, birds and other animal taxa: The reserve has a higher density and species diversity than any other area of miombo woodland (the deciduous woodland formation that typifies much of southern Africa). It lies in one of the world’s Endemic Bird Areas, and 450 species of birds are recorded in the Selous. Although inventories of other groups of plants and animals have not been undertaken it is expected that they will prove to be equally diverse.

CONSERVATION STATUS AND PROSPECTS: The outlook for conservation of the Selous Game Reserve has deteriorated significantly in recent years due to diminished management capacity resulting from budget cuts associated with the abolition of the reserve’s revenue retention scheme. Poaching of elephant, rhino and other species has escalated, leading to dramatic declines in populations, with unknown ‘knock-on’ ecological consequences. Protective legislation has been relaxed to allow mineral resource exploration and exploitation, and significant concessions have been awarded. The boundary of the property was modified in 2012 to excise an area for uranium mining. A major hydro-electric power scheme to dam the Rufiji River at Stiegler’s Gorge is proposed, with major potential impacts on the downstream ecology of this unique seasonally-flooded ‘sand river’.

MANAGEMENT EFFECTIVENESS: Management is severely constrained by limited funding and capacity, allowing a surge in poaching and other infringements in recent years. Furthermore, a revision of legislation in 2009 has weakened the legal provisions by allowing oil and mineral exploration and exploitation in the property. An area of 412 km2 is being excised to make way for a uranium mine, and a major hydro-electric power project at Stiegler’s gorge is reported to be ‘imminent’.

Poaching: In the decade following the site’s inscription there was a major surge in commercial poaching for ivory and rhino horn, which resulted in a reduction of elephant numbers from around 109,000 in 1980 to 31,000 in 1989, and a catastrophic decline in black rhino populations (from around 3,000 in 1981 to just a few hundred some years later). There was some recovery in elephant numbers in subsequent years, but a new surge in poaching has been experienced since about 2005 resulting in an estimated 44% decline in the Selous elephant population between 2006 and 2009.

Poorly regulated commercial sport hunting: The majority of the Selous Game Reserve (i.e. the area lying to the south of the Rufiji River) is managed for commercial sport hunting, which generates essential revenue for management, as well as contributing to resource protection in more direct ways. There have however been long-standing concerns over the management of this activity, and a joint WHC/IUCN mission visited the property in November 2008 to assess the state of conservation of this part of the world heritage site. The mission noted a number of improvements necessary for the management of hunting, including the need for more information in setting quotas and for greater transparency in allocating hunting blocks.

Poorly regulated tourism development: Six camps/lodges were operational in the northern sector of the Selous at the time of the 2007 Mission, with another 12 planned or under development. This was despite the lack of an overall plan for tourism development in the area, and the absence of adequate infrastructure to support such developments.

Invasive alien plants: The spread of alien plants is reported to be accelerating, including Mimosa pigra, Lantana camara and the floating aquatic plant, Pistia stratiotes.

Oil and Mineral exploration: Transects cut through the area as part of a Shell oil exploration programme (1981-85) provided access to three quarters of the reserve and have subsequently been used by poachers, mining prospectors and cultivators. In 2005 and 2006, two other oil companies (Dominion Oil & Gas, and Heritage Oil) were awarded concession blocks covering most of the Selous Game Reserve, although neither company has yet received permission from the wildlife authorities to commence prospecting activities. Prospecting licenses have also been granted to explore for precious stones inside the world heritage site.

Uranium mining: In 2012 the world heritage committee approved an application by the Tanzanian government to make a ‘minor’ modification to the boundary of the world heritage site so as to exclude an area identified for a new uranium mine (covering about 412 km2, or 0.8% of the total area). This was approved despite the risk of establishing a precedent for modification of world heritage site boundaries when mining opportunities arise elsewhere, and with little understanding of the consequences of the proposed mining activity on the wider Selous ecosystem.

Dam construction: Two dam projects may affect the property. Kidunda dam would be constructed outside the north-eastern boundary, but may lead to inundation of some areas (2-5 km2) within the property, and affect important wetland areas on its boundary. A more significant long-standing proposal, with much more severe potential impacts on the property is the construction of a dam on the Rufiji River at Stiegler’s Gorge. This project is still at the planning stage, but seems to be gaining strong political support. It would flood a large part of Selous, alter the seasonal flooding regime (affecting the natural ecological processes of the downstream sandbanks and floodplains), and require major infrastructure developments inside the world heritage site

The slideshow provides a comprehensive overview of Tanzania’s Selous Game Reserve showing the area’s savanna woodland landscapes, Rufiji River gorge sand islands, wetlands and wildlife habitats. Some of the characteristic plants and animals are shown, including large mammals – such as elephants, buffalo, wild dog and hippos – many of which are threatened species. The slideshow illustrates some of the conservation management issues and some typical safari experiences.