You are here: Home1 / All featured sites2 / Serengeti National Park

EXPLORE TANZANIA’S SERENGETI NATIONAL PARK with this slideshow, check the location map and get all the facts and information below. 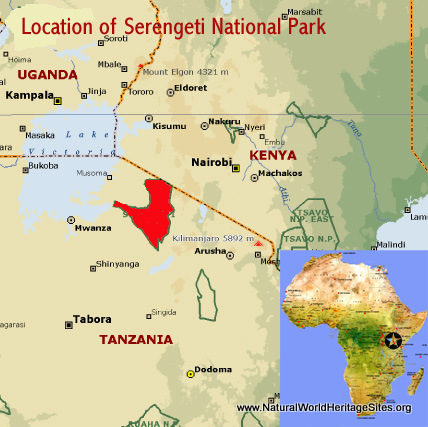 Values: Twice a year ungulate herds of unrivalled size pour across the ‘endless plains’ of Serengeti on their annual migrations between grazing grounds which stretch from the Ngorongoro highlands in the south to Kenya’s Masai Mara in the north. The migration involves more than a million large herbivores, with herds of wildebeests, zebras and gazelles, followed by predators. It is, without doubt, one of the most impressive wildlife spectacles in the world. A comprehensive review of the world heritage values of Serengeti National Park is provided below, together with details of the area’s conservation status and the threats it faces.

REVIEW OF WORLD HERITAGE VALUES: The specific attributes which qualify Serengeti National Park for world heritage status can be summarised as follows:

Greatest mammal migration on Earth: The Serengeti supports the greatest large mammal migration on Earth, involving approximately 2 million wildebeest, zebra and Thomson’s gazelle, accompanied by 7,500 hyenas, 3,000 lions and other predators. The annual migration follows a 1,000 km circuit between key dry-season water points and grazing lands along the Mara river (in Kenya’s Masai Mara Reserve) and short-grass pastures and calving grounds to the south (in the Ngorongoro Conservation Area).

Outstanding savanna scenery: Serengeti means ‘endless plains’ in the local Masai language and the vast expanse of short-grass savannas provide a spectacular setting for the phenomenal congregations of wildlife. The plains are punctuated by impressive outcrops of massive weathered granite ‘kopjes’, seasonal wetlands, low hills and a diversity of woodland types.

Complex and complete mammalian community: The mammalian community is the most diverse and complex savanna community on Earth, including 1.3 million wildebeest, 0.6 million zebra, 0.9 million Thomson’s gazelle and large numbers of other species such as buffalo, eland, topi, giraffe, warthog, elephant, hippopotamus, and black rhino. The complex community of large grazing mammals is accompanied by an equally impressive diversity of large and small predators including as many as 7,500 hyenas, 3,000 lions, 1,000 leopards, 225 cheetahs and wild dogs.

Diversity of savanna communities: The ‘endless plains’ of Serengeti experience a remarkable spatial complexity of abiotic factors (rainfall, temperature, soils, topography), resulting in a diverse array of savanna grassland, forest and woodland communities. These include short-grass plains, Terminalia and Acacia woodlands, gallery forests and communities associated with saline pans, other wetlands and rocky kopjes. The General Management Plan for the park (2006-16) distinguishes 7 major vegetation types and a number of sub-types.

Diversity of other fauna and flora: The park’s flora and fauna has not been systematically surveyed, but species diversity is expected to be high for a wide range of taxa. The park lies within one of the world’s Endemic Bird Areas, with over 500 bird species recorded.

CONSERVATION STATUS AND PROSPECTS: The large size of Serengeti National Park and its location at the core of a trans-boundary complex of protected areas (which together cover most of the wider ecosystem) should ensure the long-term protection of its values. Recent threats to build a major road through the northern part of the park, and establish other infrastructure corridors, have been averted for the time being, but there remains a possibility that such projects will be re-examined. Tourism brings substantial financial benefits which support management of Serengeti as well as other parks in Tanzania, but associated developments will require continued vigilance to ensure that carrying capacities are not exceeded.

MANAGEMENT EFFECTIVENESS: Serengeti benefits from a strong policy and legislative environment which enables the Tanzania National Parks Authority (TANAPA) to raise and retain revenues from a rapidly growing number of visitors. Funds generated at Serengeti (US$ 22.4 million in 2009/10) have been used to strengthen protection and management of the park, as well as other Tanzanian parks. Although there are still some shortcomings this is one of the best managed parks in Africa, maintaining a high degree of ecological integrity.

REVIEW OF CONSERVATION ISSUES AND THREATS: The following issues represent specific threats to the ecology, conservation and values of Serengeti world heritage site.

Development of road and other infrastructure corridors: There has been a series of development proposals to link the heavily-populated parts of the Lake Victoria basin to the west of Serengeti with the port city of Dar es Salaam and other areas to the east of the park. The most recent, highly controversial, proposal involved construction of a tarmac road through northern Serengeti from Musoma to Arusha via Tabora ‘B’ (park gate) and Klein’s Gate. The part of this road project which would have traversed the park has now been abandoned. There have been earlier proposals to construct a railway through the park, and to pass fibre-optic cables through the area, but these threats have also been averted.

Water shortage: Surface water is scarce throughout Serengeti, the only permanent source being the Mara River in the north. This river is threatened by unsustainable levels of water abstraction and by degradation of forest in the Mau catchment (in Kenya). Water for the park headquarters and other infrastructure at Seronera (in the centre of the park) is extremely limited and is piped a considerable distance from Bologonja Springs. Elsewhere, tourist lodges and other facilities depend on borehole water.

Tourism infrastructure development: The central part of Serengeti (around Seronera) appears to be overwhelmed by visitors, partly because tourism infrastructure and facilities are concentrated in this relatively small area. Overnight facilities include a total of 2,016 beds, comprising 5 lodges, 9 permanent tented camps, 9 public campsites, 98 ‘premium’ and ‘special’ campsites, 4 rest houses and a youth hostel. The road network used for game viewing is limited, and much of it is heavily used, especially around Seronera.

Tourist numbers, distribution and carrying capacity: The park receives approximately 300,000 visitors per annum, which would not be excessive if they were well distributed around the park. However, visitors tend to concentrate around Seronera where there is an attractive visitor centre and other facilities. There are few opportunities for visitors to get out of their vehicles elsewhere, and the number of game viewing tracks is limited, so those that exist become quickly over-crowded.

Fire: Although the Serengeti ecosystem is adapted to fire, hot burns (which occur at the end of the dry season and are often lit by poachers to detract attention from their activities) can cause extensive long-term damage to woody vegetation.

Disease transmission from domestic animals: Disease transmission between domestic stock and wildlife can be catastrophic. The present population of 1.3 million wildebeest is the result of long-term recovery from a rinderpest outbreak, transmitted by cattle, which had decimated the population. Wild dogs disappeared from the park in 1991, when a rabies outbreak killed the last three packs.

Insufficient funding for management: A park budget allocation equivalent to US$ 6.5 million was made in 2009/10, which was insufficient to cover all planned activities and provide for necessary equipment and infrastructural investments. The park management notes a shortage of patrol vehicles and heavy plant for road maintenance.

Change of land-use in adjacent areas: Human population densities are increasing in all areas around the protected area complex, limiting wildlife migration routes in the buffer zones.

Climate change: The potential impact of climate change is unknown, but may affect critical aspects of ecosystem dynamics including water availability and the quality and quantity of grazing.

The slideshow provides a comprehensive overview of Tanzania’s Serengeti National Park showing the area’s spectacular savanna landscapes and wildlife habitats. Some of the characteristic plants and animals are shown, including the massed herds of wildebeest and zebra that take part in the great Serengeti migration, as well as other large mammals – such as elephants, buffalo, lions, cheetahs and hippos – many of which are threatened species. The slideshow illustrates some of the conservation management issues and shows exhibits at the excellent visitor centre in Seronera as well as some typical safari experiences.