You are here: Home1 / All featured sites2 / Simien National Park

EXPLORE ETHIOPIA’S SIMIEN NATIONAL PARK with this slideshow, check the location map and get all the facts and information below. 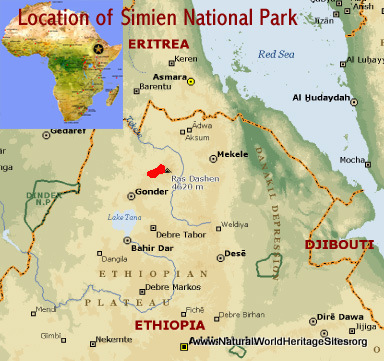 Values: The Simien Mountains National Park includes one of the most dramatic mountain landscapes in Africa, and is home to some of the continent’s rarest fauna and flora, including the endemic Walia ibex, Simien fox and Gelada baboon. The park covers the northern escarpment of an ancient mountain massif of igneous basalts, deeply cut by forested gorges and sheer cliffs, some 1,500m high. The Park was one of the first four sites to be inscribed on the World Heritage List in 1978, but has been on the List of World Heritage in Danger since 1996 because of a decline in the population of the Walia ibex due to human settlement, grazing, agriculture and road construction. The ibex population is now on the increase but the Ethiopian wolf remains extremely rare. The Ethiopian authorities are currently working on a plan to extend the site to include more of the critical habitat for these highly endangered species. A comprehensive review of the world heritage values of the site is provided below, together with details of the area’s conservation status and the threats it faces.

Dramatic mountain scenery: The park occupies a stretch of about 35 km along the dramatic northern escarpment of the Simien massif, with a high plateau at around 4,000m altitude, dropping precipitously through a series of steep forested gorges, massive cliffs and spectacular outlying inselbergs and rock outcrops.

Endemic plant communities: The flora is exceptionally diverse and includes communities characteristic of different altitudinal zones from around 1,800 to 4,000m altitude. Communities include montane forests, tree heather forests, high altitude grasslands and Afro-alpine communities. The higher Afro-alpine communities are especially rich in endemic species, including the conspicuous giant Lobelias and red-hot pokers (Kniphofia spp.), while 10 species of grass (19% of the total) are endemic to the Simien.

Endangered large mammals: Flagship species of large mammal include the Walia ibex, Ethiopian wolf and Gelada baboon, all endemic to the Ethiopian highlands. The endangered Walia ibex is restricted to the Simien Mountains, where populations are recovering and may now number around 1,000 individuals. The endangered Ethiopian wolf is the world’s rarest canid and although it occurs elsewhere in the Ethiopian highlands, Simien is one of its last remaining strongholds.

Rare and endemic birds: Over 137 species of birds are recorded in this Birdlife Important Bird Area, including 16 species endemic to the Ethiopia/Eritrea highlands. There is an important population of the rare lammergeyer (an unusual vulture)

CONSERVATION STATUS AND PROSPECTS: Simien Mountains National Park was one of the first African sites to be inscribed on the world heritage list, and its outstanding scenic and biodiversity values have never been in doubt. However, the property has always faced extreme challenges arising from its location in the densely populated Ethiopian highlands where people live close to nature and rely on its bounty. The area was settled before the park’s inauguration and this legacy presents the greatest threats to its long-term future. It remains under intense human pressure with settlements remaining inside the park, a fifth of its area under cultivation and most of the rest subject to intensive grazing pressure from domestic livestock. Poaching of the highly endangered endemic Walia ibex and Ethiopian wolf has greatly diminished in recent years, and there are advanced plans to increase the park’s size from 136km2 to 400 km2, but these developments will only really be of lasting value if the level of human activities within the park can be brought to within sustainable limits.

MANAGEMENT EFFECTIVENESS: Despite significant recent improvements in protection and management which have resulted in an increase in populations of the park’s highly endangered large mammals and real progress with community relations and tourism, there remain very serious challenges. Most of the park is subject to high levels of grazing by domestic stock, about 17% of it is under illegal cultivation, and there are 600 resident households in nine illegal settlements. Management lacks the resources to tackle these issues effectively. Furthermore, most of the detailed provisions in the General Management Plan remain to be implemented.

Over-grazing: With the exception of a few ‘no grazing’ zones at the top of the escarpment around Chenek and Sankaber, the entire park is subject to heavy grazing pressure from massive numbers of sheep, goats and other stock belonging to herders around the park who bring their animals into the park. The constant presence of high densities of domestic stock, and the resulting overgrazing reduces the amount of habitat available for key wildlife species (e.g. Walia ibex avoid disturbed areas) and diminishes its capacity to support key species such as the Ethiopian wolf (whose rodent prey require rank grass).

Cultivation: About 23 km2 (17%) of the property is under cultivation by about 600 households living within the park and a further 1500 households around its periphery. There is little attention to soil conservation measures and sheet and gulley erosion commonly occur in areas subjected to cultivation.

Settlement and human presence: 586 households (3,223 people) were established in 9 villages within the park at the time of a household survey in 2006 and many others residing nearby use the park’s land and resources for cultivation, grazing and resource collection.

Road and infrastructure corridor: A main (unpaved) road runs through critical wildlife habitat in the middle of the park, along the top of the escarpment, linking Debark with Mekane-Birhan. Electricity transmission lines were being installed along this road at the time of the last monitoring mission in October 2009.

Tree cutting and firewood collection: The high density of people living in (or near to) the park and the local scarcity of wood resources, combine to create enormous pressure on forests and trees, especially the tree heather forests and Hypericum thickets at higher altitudes.

Poaching: Poaching of large mammals for subsistence use is reported to be less of a threat than used to be the case, but it was responsible for a very severe reduction in Walia ibex numbers during the 1980s and early 90s.

Invasive alien plants: The threat from invasive exotics has not been properly assessed, but was observed during an official IUCN/UNESCO mission in 2009.

Climate change: The expected long-term trend towards global warming is expected to shift plant and animal communities to higher ground, and is likely to reduce the amount of suitable habitat available to species that presently occur at the higher elevations, particularly the Ethiopian wolf.

Institutional and legal issues: Agreement has been reached with local communities to extend the park from its present 136 km2 to around 400 km2, and the new boundaries have been marked with 300 concrete beacons. However, there has been a delay in getting the new boundary mapped and gazetted which could jeopardize the desired park extension and the ecological sustainability benefits it will bring.