You are here: Home1 / All featured sites2 / South China Karst

EXPLORE CHINA’S SOUTH CHINA KARST with this slideshow, check the location map and get all the facts and information below. 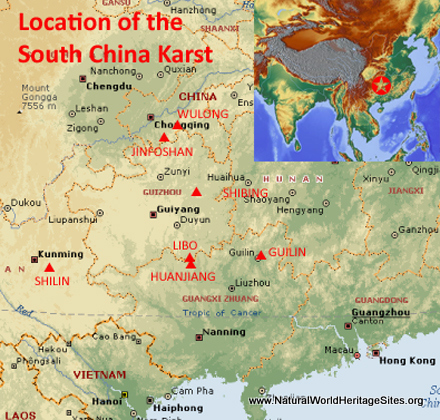 Location and Values: The South China Karst world heritage site is a serial site with seven widely separated clusters (a total of 12 component parts) spread over the provinces of Guizhou, Guangxi, Yunnan and Chongking. It contains the most significant types of karst landforms, including tower karst, pinnacle karst and cone karst formations, along with other spectacular characteristics such as natural bridges, gorges and large cave systems. It is representative of the huge karst area (some 500,000 km2) that covers much of southern China, Vietnam and the rest of Indochina.

Conservation Status and Prospects. According to IUCN’s recent Conservation Outlook Assessment the conservation status of this site is ‘good with some concerns’. The IUCN report notes that ‘the outstanding scenic and geological values are well protected under the current management regime. These values are largely resilient to human modification and loss and their overall condition and trend is good and stable. Significant threats are few in number and generally under control through careful management intervention. There is still some priority needed in redressing boundary delimitation issues for the property itself and the buffer zones. Improved administrative co-ordination among the various separate components of the serial property is also a priority for further consideration. There are two significant current threats that could become more problematic in the near future – pollution of upstream catchments affecting both surface and underground water courses in the property, and increased tourism infrastructure development, which could introduce undesirable elements of mass tourism at popular scenic spots. However, it needs to be noted that it is often difficult to generalise because the issues of concern vary in seriousness from component to component in this serial property.’

The photos in this slideshow are limited to just one of the ‘clusters’ of this serial site, around Guilin. They show the gigantic cone karst formations which dominate the landscape in this area and include photos of rural life in this part of China. One particularly interesting aspect of traditional lifestyles in this area is night-time fishing of the rivers that flow through the area, using domesticated cormorants with a string ‘necklace’ that prevents them swallowing their catch.