You are here: Home1 / All featured sites2 / St Kilda

EXPLORE the United Kingdom’s St Kilda world heritage site with this slideshow, check the location map and get all the facts and information below. 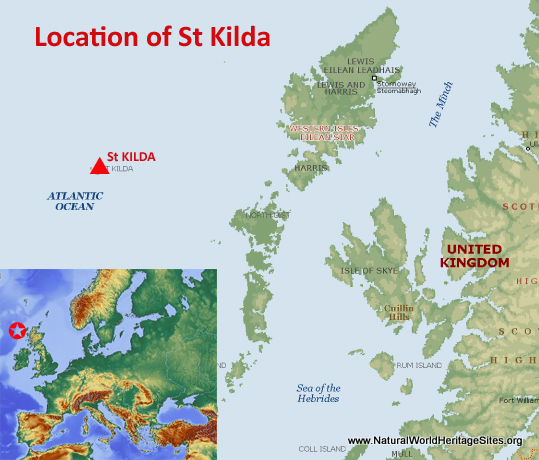 Location and Values:  St Kilda is a tiny archipelago of islands located in the North Atlantic Ocean, about 100 km west of the Scottish Hebrides Islands. This is a mixed site, satisfying world heritage natural and cultural criteria.  In terms of natural heritage the four isolated volcanic islands of Hirta, Don, Soay and Boreray are scenically spectacular, with some of the highest sea cliffs in Europe. These are used by more than 1,000,000 seabirds including particularly important colonies of gannets, puffins and fulmars.  The spectacularly abundant bird life is supported by a complex of diverse marine zones with exceptional underwater scenery.   From a cultural viewpoint, the islands offer evidence of 2,000 years of human occupation, with the remains of traditional highland stone houses and field systems designed for life in the extreme climatic conditions prevailing in the area. The inhabitants were able to eke out a living from bird products, agriculture and sheep farming until 1930 when the last people abandoned the area.

Conservation Status and Prospects.  According to IUCN’s Conservation Outlook Assessment (2017) the conservation status of St Kilda is ‘good’. The IUCN report notes that ‘The overall situation within this World Heritage site is good. The main issues of concern – declines in some seabird population sizes and breeding success (except gannet Morus bassanus and fulmar Fulmarus glacialis) – seem likely to largely reflect natural variation in the wider marine environment. For instance after some poor years, Puffin Fratercula arctica breeding success, according to NTS monitoring, returned to average levels in 2013. But if the longer-term population trend is for a decline, there is more cause for concern about this value. All the other values seem in good shape and likely to remain so if the current situation prevails. Unfortunately the main threat to the seabirds is changes that occur outside the World Heritage Site, in particular in oceanographic conditions that appear to have reduced prey availability and hence breeding success for some species. They are therefore outside immediate management control. A buffer zone in which fishing is restricted could help, as could a potential Marine SPA under the EU Directives. Protection and management within the World Heritage site remains highly effective. ’

The slideshow ‘tells the story’ of St Kilda with a portfolio of photos by Ian Francis from a visit in June 2009.