You are here: Home1 / All featured sites2 / Tasmanian Wilderness

EXPLORE Australia’s Tasmanian Wilderness with this slideshow, check the location map and get all the facts and information below. 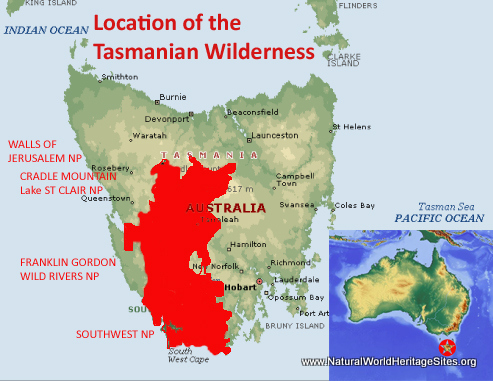 Location and Values: The Tasmanian Wilderness occupies 20% of the land area of the island of Tasmania, lying off the southeastern coast of the Australian continent. It covers an extensive contiguous complex of conservation areas in the southwest of the island, including the major national parks of Cradle Mountain Lake St Clair, Walls of Jerusalem, Franklin-Gordon Wild Rivers, Southwest and Mount Field National Parks as well as the Central Plateau Conservation Area.  The world heritage site encompasses most of the last temperate rainforest in Australia, combining ancient ‘relict’ species originating on the Gondwana supercontinent (such as the southern beech), with extensive tracts of tall Eucalypt forests more characteristic of Australia’s modern-day vegetation.  The Tasmanian Wilderness includes large areas of rocky glaciated mountain terrain, alpine meadows and moorlands, highland lakes, swamps, wild rivers and a long rugged coastline.  It provides habitat for some of Australia’s most iconic species – such as the platypus and echidna (egg-laying monotreme mammals) as well as the Tasmanian Devil and quoll (carnivorous marsupials) – and its flora and fauna includes an exceptionally high proportion of endemic species, known only from Tasmania.

Conservation Status and Prospects.  According to IUCN’s Conservation Outlook Assessment (2014) the conservation status of the Tasmanian Wilderness at that time was ‘good with some concerns’. The IUCN report noted that ‘competing land-use claims along the boundaries of the Tasmanian Wilderness has been a contentious issue ever since the inscription of the property in 1982 and its further extension in 1989. The recent boundary extensions of 2010, 2012 and 2013 have contributed to the Outstanding Universal Value of the site and improved the scope for effective management of the property. Despite considerable management efforts, a high number of threats face both the initially inscribed property and areas to which it was extended. The biggest issues arise from inadequate resourcing of scientific research into WH values and monitoring; increasing pressures to allow intrusive commercial tourism which could impact heavily on key sites and WH values; protection and management of areas which have been recently added to the property. The conflict around these extensions needs to be resolved in order to ensure the long-term conservation of the property. ’

The slideshow ‘tells the story’ of Australia’s Tasmanian Wilderness with a portfolio of photos by Peter Howard taken during a visit in January 2018.  The journey starts at the southern end of Lake St Clair with a short passenger ferry trip to Echo Point and an exhilarating walk along the Lake’s wild shoreline and through its damp, mossy lakeshore forests to Narcissus Hut.  It then follows the main road that cuts east-west over the mountains through a diversity of wild scenery, with stops at scenic highlights such as Nelson Falls.  Photos of some of the iconic animals of the Tasmanian Wilderness are included here – Tasmanian Devil, Quoll, and pademelon.  The road that traverses the wilderness reaches Queenstown and continues to Strahan where a large catamaran service takes visitors around the Macquarie Harbour and into the wild gorge at the mouth of the Gordon River.  Visitors are able to step ashore at Sarah Island, one of the oldest convict settlements in Australia (satisfying part of the cultural criteria for the world heritage listing as a ‘mixed’ site), before continuing into the gorge and disembarking for a short experience of one of the wettest parts of the rainforest along a boardwalk at Heritage Landing.  Back in the small town of Strahan, visitors can learn some of the history of past forest exploitation – still a highly controversial issue – by visiting a sawmill that uses ancient logs of Huon Pine, one of the area’s relict endemic conifer tree species.

The long series of photos that follow show the Cradle Mountain area, with its iconic scenery, a habituated wombat grazing the alpine meadows and the rocky scramble to the peak. The slideshow then continues with views of the Pandani walk at Lake Dobson in Mount Field National Park, and the world’s tallest flowering trees which can be seen in the Tall Trees Walk or (better still) the nearby Styx Valley.  The slideshow then shows views of the wild coastline in Southwest National Park, featuring Lion Rock and the walk from Cockle Creek, before finishing with a few photos intended to highlight some of the controversies that have characterized the fight for conservation of this wilderness for decades – large commercial forestry interests and the damming of wild rivers for hydropower generation.