EXPLORE Tehuacan-Cuicatlan Valley: Originary Habitat of Mesoamerica with this slideshow, check the location map and get all the facts and information below. 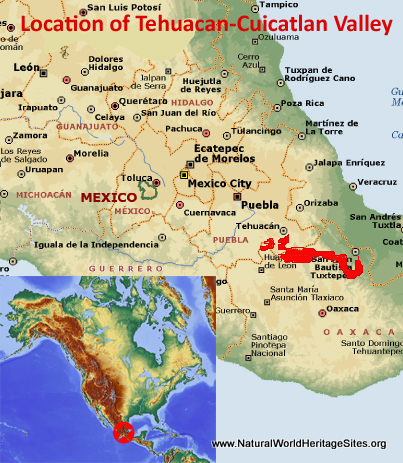 Location and Values: The Tehuacan-Cuicatlan Valley: Originary Habitat of Mesoamerica is located in central Mexico, straddling the border between the states of Puebla and Oaxaca. It is the most biologically diverse arid region in North America, and has served as one of the world’s ancient ‘cradles of civilisation’. In terms of biodiversity, the area supports representatives of a remarkable 70% of the world’s plant families, and is one of the main centres of diversification for cacti, a globally threatened plant family. ‘Forests’ of densely-packed columnar cacti are a prominent feature in some areas, while other plant groups typical of arid and semi-arid habitats – such as agaves, yuccas and bromeliads – exhibit a remarkable diversity of species. Ten percent of the 3,000 vascular plants are thought to be endemic to the Valley. The area’s fauna is less diverse, reflecting the dryland conditions, but includes 134 species of mammals and 353 species of birds (including a breeding colony of the threatened Green Macaw), with several endemic species.
From a cultural perspective, this ‘mixed’ site reveals archaeological evidence of human adaptation and development spanning more than 12,000 years. In particular, life under these arid conditions resulted in two of humanity’s major innovations, notably (1) the domestication of plants such as maize and (2) the development of water management technologies such as canals, wells, aqueducts, terraces and dams.

Conservation Status and Prospects. According to IUCN’s 2018 evaluation of the nomination for this new world heritage site, the level of threats to its conservation is relatively low. The IUCN report notes that the human population density is low and people are tending to move out of the area, thereby reducing the pressure on natural resources. Nevertheless, there are some ongoing concerns, including illegal trafficking of cacti, extraction of agave plants and firewood, hunting, overgrazing, forest encroachment and secondary impacts associated with roads. Tourism is still at a very early stage of development, so its’ possible impacts have not yet become apparent.

The slideshow ‘tells the story’ of the Tehuacan-Cuicatlan Valley: Originary Habitat of Mesoamerica with a portfolio of photos by Peter Howard from a visit in December 2019.  It illustrates the landscape features, some of the typical plants and animals as well as some ‘cultural’ aspects of the site.  This is a ‘serial site’, with three geographically separated areas.  The slideshow starts with a trio of introductory photos before continuing to illustrate the landscapes and diversity of spectacular cacti and other plants found in the drier, San Juan Raya part of the site, including some wonderful forests of columnar cacti.  The small, informative visitor centre in the rural village of San Juan is shown.

The second part of the slideshow illustrates a tour of the main Zapotitlan-Cuicatlan component of the site, starting in Tehuacan and following the busy main road (Route 135D) southwards through the core of the site.  The first stop on this tour features some exhibits in the Museo del Agua (Water Museum) at San Gabriel Chilac, where some of the ancient cultural practices of the region related to water management and associated agricultural development are shown.  It continues southwest via the spectacular high road bridge crossing the deep Cuicatlan River valley, and over the high ridge in the west of the site, where some broad-leaf deciduous forest characterizes the moister climatic conditions at higher elevations.

The southern part of the site enjoys a much moister climate than the arid north and oak forests dominate the valleys and hillsides, the branches of trees festooned in old-mans-beard lichen and a rich diversity of bromeliads. Here, in the buffer zones, agricultural communities employ age-old water retention and management techniques, and traditional lifestyles are much in evidence.  The slideshow illustrates a second (west-east) traverse of the south-central part of the site following the dirt track connecting the small town of San Juan Bautista Coixlahuaca via the villages of Santa Maria Ixcatlan and San Pedro Jocotipac to join the main (Route 135) road a few kilometers north of Cuicatlan town on the eastern side of the site. This part of the slideshow illustrates the flora of the oak forests and the agricultural landscapes and livelihoods in this part of the site (the boundaries of which are largely unmarked and difficult for visitors to distinguish). Returning north towards Tehuacan, the main Route 135 provides access to the Green Macaw breeding sanctuary at Santa Maria Tecomavaca, one of the few natural areas of the site that has been developed for visitors, with trails and view sites.  The slideshow concludes with a couple of images of the drier landscapes and columnar cacti that characterize the eastern slopes of the site.