The Ahwar of Southern Iraq

You are here: Home1 / All featured sites2 / The Ahwar of Southern Iraq

EXPLORE The Ahwar of Southern Iraq with this slideshow, check the location map and get all the facts and information below. 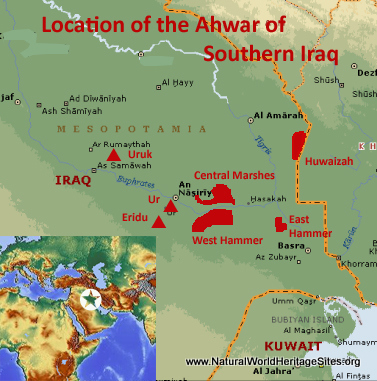 Location and Values: The Ahwar of Southern Iraq: Refuge of Biodiversity and the Relict Landscape of the Mesopotanian Cities (to give the site its full official name) is located around the confluence of the region’s two great rivers – the Euphrates and the Tigris. The area is one of the world’s largest inland delta systems, in an extremely hot, arid environment.  The wetlands demonstrate processes of ecological succession and speciation in a relatively young ecosystem as well as providing an important overwintering ground for water-birds and serving as a critical stop-over for many other birds on migration.

The site includes four natural wetland areas and three archaeological sites which reflect changes in the natural landscape and associated human societies over the past few thousand years.  The four wetland areas (Huwaizah, Central Marshes, East and West Hammer) are today much smaller and far removed from the three ancient cities (Uruk, Ur and Tell Eridu) which flourished on the margins of more extensive freshwater marshes that existed in their day.  Climate change and sea water intrusions over the millennia, combined with recent drainage of wetlands, have continuously altered the extent and nature of the inland delta and wetlands of the region.

The four wetland areas exhibit quite different characteristics, with the Huwaizah Marshes being the only component that was not drastically drained during the 1980s and 1990s, retaining its key ecological attributes as a freshwater system replenished with high volumes of water from seasonal flooding. It served as a refuge for many wetland species that have been able to recolonise the other areas after they were re-flooded in the early 2000s.  Today the Central Marshes represent the ecological core of the Ahwar following their restoration.  The East and West Hammer Marshes are subject to sea water intrusion, which creates very specific ecological conditions that allow spawning of marine fish species (in East Hammer) and provide a final stop-over for millions of migrating birds on their way south before they cross the vast Arabian Desert.

Conservation Status and Prospects. According to IUCN’s Conservation Outlook Assessment (2020) the conservation status of The Ahwar of Southern Iraq is of ‘significant concern’ and may warrant the site’s inscription on the List of World Heritage In Danger. The IUCN report expresses ‘serious concern’ over the protection and management of the marshes, noting that stakeholders lack the necessary technical, financial and institutional capacity.  The natural components of the site are seriously threatened by (1) insufficient freshwater flows into the marshes due to upstream use of water (including by neighbouring countries), (2) increasing rates of consumption of water by the oil industry (as Iraq’s oil production capacity is progressively re-instated), (3) possible future construction of upstream dams, (4) inadequate legal safeguards and law enforcement capacity for the marshes, (5) unsustainable hunting of birds and overfishing within the marshes, (6) lack of monitoring of biodiversity and other values required to inform management decision-making, (7) political instability within Iraq and neighbouring countries (which might be resolved through agreements on additional water use, further depriving the marshes of essential inflows).

The slideshow ‘tells the story’ of The Ahwar of Southern Iraq with a portfolio of photos that illustrate its landscape features, the livelihoods of local people and the archaeological sites.  It starts with some general views of the wetlands and their birdlife, followed by photos of local community use of the wetlands (including the construction of homesteads, shelters and even a quite elaborate mosque from locally-harvested reeds). Some birds of particular conservation interest are shown, including (in order of appearance): Iraq babbler, marbled teal, African darter, white egret and Basra Reed warbler. The final part of the slideshow illustrates the archaeological sites, now located in harsh desert environments, with a single (rather distant) photo of the ziggurat of Ur (birthplace of Biblical Abraham), followed by four images of Uruk (where the world’s first system of writing was developed) and a final image of a short section of mud-brick walling exposed in the desert at Eridu.

The following Flickr photographers and other sources are acknowledged with thanks for their contributions to this slideshow (as credited in the watermark of each photo):  Adeeb Atwan, Michael Heyns, Emily Jones, David Stanley, Cem Kulacoglu, Katya Rudnev, UNDP Climate, UNEP Disasters & Conflicts, USAID Water Office and Zaid Sameer.