You are here: Home1 / All featured sites2 / Tropical Rainforest Heritage of Sumatra

EXPLORE Indonesia’s Tropical Rainforest Heritage of Sumatra with this slideshow, check the location map and get all the facts and information below. 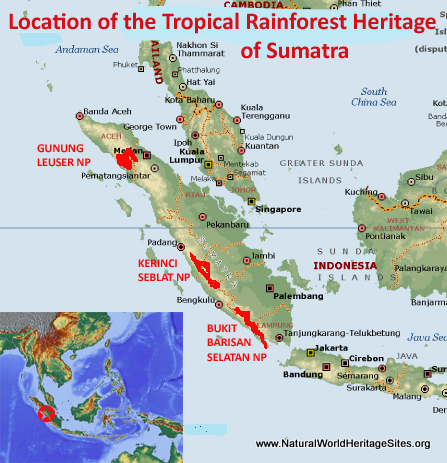 Location and Values: Indonesia’s Tropical Rainforest Heritage of Sumatra is located along the mountain spine that runs down the western side of the vast Indonesian island of Sumatra. It is a serial site encompassing three of the island’s largest national parks – Gunung Leuser, Kerinci Seblat and Bukit Barisan Selatan. These areas protect some of the most diverse tropical rainforest in the world, which are also amongst the world’s most threatened habitats. From a biodiversity perspective the world heritage site is exceptional as it covers a range of tropical habitats from sea level to the summit of Indonesia’s highest volcano, Mount Kerinci at 3,805m. It harbours an estimated 10,000 species of plants, 201 mammal species and 580 species of birds, including the world’s largest flower (Rafflesia arnoldi) and its tallest flower (Amorphophallus titanium), together with iconic large mammals such as the endemic Sumatran orang-utan, Sumatran tiger and Sumatran rhino. The world heritage site covers an area that has been an important refuge during previous periods of climatic change and is likely to continue playing this role, allowing ongoing ecological processes to operate and sustain the forest’s inherent diversity. The area also includes some outstandingly beautiful scenery, featuring magnificent volcanoes such as Mount Kerinci, rugged coastlines, freshwater lakes set in densely forested hills, waterfalls and wild rivers.

Conservation Status and Prospects.  According to IUCN’s Conservation Outlook Assessment (2017) the conservation status of Indonesia’s Tropical Rainforest Heritage of Sumatra is ‘critical’. The IUCN report notes that ‘Serious concern about the threats and damage to the TRHS have been raised by UNESCO and IUCN since the property’s inscription in 2004. In 2011, the TRHS was inscribed on the List of World Heritage in Danger and, in 2014, the Committee described the corrective measures necessary to attain a desired state of conservation that would justify removing the property from the ‘in danger’ list . Those corrective measures include tackling poaching, illegal logging, encroachment and proposed road developments, and improving management and law enforcement. However, recent official reports indicate that environmental crimes within the property, such as poaching, illegal logging and encroachment, continue at very high levels and may even be increasing. The damage occurring to lowland tropical rainforests and the habitat of species such as orangutans, rhinos, tigers and elephants is therefore continuing at a high level. There is no authoritative evidence that populations of key species have stabilized. Law enforcement is totally inadequate; the numbers of arrests documented by the State Party comprise a tiny fraction of the numbers of illegal incidents reported. Management of the TRHS is also inadequate due to the absence of a property-wide management plan and structure. The legal framework is complex. Serious concern remains about the impact of the Aceh Spatial Plan, whose objectives include increased resource extraction from the GLNP component of the property and its surroundings. The boundaries of the GLNP component of the property remain unclear. Requests from the Committee for a rationalization of the boundaries to exclude areas whose contribution to OUV has been destroyed and to include additional habitat of key species have not been met. A prohibition on the development of geothermal energy within protected areas in Indonesia has recently been removed – this creates additional uncertainties about future protection of the property, despite the State Party’s undertaking that geothermal development within the TRHS will not be permitted. Proposed developments on the periphery of the property, including hydro dams, geothermal development and new roads, pose additional threats to the site’s integrity. On the positive side is the State Party’s undertaking not to allow geothermal development within the property (hopefully this will be both legislated and communicated strongly to would-be developers and to provincial authorities); its completion of an SEA into road development (though it is not yet clear how this will translate into a protective policy); and the recent significant improvement in the numbers of patrols and their equipment. Hopefully, this will lead to the massive improvement in law enforcement, including arrests, prosecutions, convictions and penalties, that is necessary for the property to maintain its OUV and integrity. The TRHS, thanks to its size and diversity, retains its OUV despite the above threats, but a concerted effort on the part of the State Party and the international community is necessary to reverse the deterioration in the property’s condition. In particular, the State Party must deploy all of the resources at its disposal to reign in environmental crime and to ensure that local and provincial authorities become part of the international effort to protect this irreplaceable World Heritage property. ’

The slideshow ‘tells the story’ of Indonesia’s Tropical Rainforest Heritage of Sumatra with a portfolio of photos by Peter Howard from an official IUCN monitoring mission in April 2018, with additional material kindly provided by long-term local expert, Mike Griffiths. It starts with a series of photos showing some of the forested landscapes from the coastal fringes, along rivers and in the high forested mountains. Some of the area’s most iconic, threatened species are illustrated including Sumatran elephants, siamang, orang-utan and tiger, as well as some lesser-known animals such as a Calotis lizard, clouded leopard, golden cat, mouse deer, Malayan tapir and Malayan sun bear.  Some of the photos are taken in the wild with camera traps, others in captive collections (as encounters with such elusive species in the wild are very rare).  The world’s tallest flower (Amorphophallus titanium) is illustrated with a photo from gardens in the grounds of the Forestry Department’s Jakarta headquarters, while the world’s biggest flower (Rafflesia arnoldi) was captured on a park ranger’s smartphone, when it was in bloom shortly before our mission.  Amongst the photos are scenes from the highland tea estates surrounding the belching volcanic cone of Mount Kerinci and the nearby beauty spot of Lake Tujuh with a group of local students on a camping excursion. The slideshow finishes with some photos to illustrate a few of the issues that threaten the long-term conservation of the site including poaching, fragmentation by road and infrastructure corridors, encroachment by subsistence farmers, coffee growers and large-scale oil palm plantations, illegal logging and the smothering of natural vegetation by an introduced vine and other alien invasive species.