You are here: Home1 / All featured sites2 / Virunga National Park

EXPLORE CONGO’S VIRUNGA NATIONAL PARK with this slideshow, check the location map and get all the facts and information below. 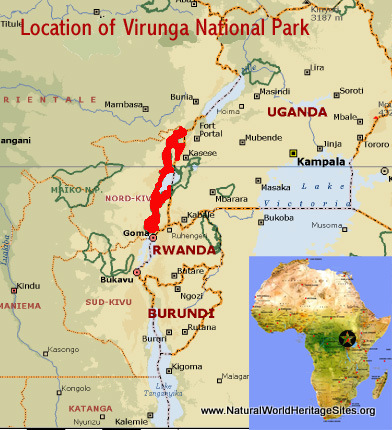 Values: Virunga National Park is Africa’s oldest and most diverse park. Established in 1925, it straddles the equator, stretching from the lowlands at the bottom of the Rift Valley (680m) to the highest peak of the Rwenzori Mountains at 5119m. Its vast range of habitats includes rift valley lakes, swamps and acacia savannas, woodlands and forests, active volcanoes and rugged mountain slopes. The highest parts of the Rwenzoris support glaciers and snowfields on the equator, and the renowned volcanoes area bordering Rwanda and Uganda in the south supports half the world’s mountain gorillas. The number of species recorded for different groups includes 218 mammals (including 22 primates), 706 birds, 109 reptiles and 78 amphibians. For comparative purposes, the number of bird species found in this park exceeds the total for the entire United States and is more than three times the number occurring in the United Kingdom.

A comprehensive review of the world heritage values of Virunga National Park is provided below, together with details of the area’s conservation status and threats.

REVIEW OF WORLD HERITAGE VALUES: According to IUCN’s Conservation Outlook Assessment (2014), the specific attributes which qualify Virunga National Park for world heritage status can be summarised as follows:

Endemic species. The fauna and flora of the park includes many rare species of animals and plants with worldwide distributions limited to the western (Albertine) branch of Africa’s Great Rift Valley. These include 230 endemic plant species, 21 mammals (including 4 primates), 25 birds, 11 reptiles and 21 species of amphibians.

Rare and endangered large mammals. The park supports populations of iconic large mammals, including rare and highly endangered species such as mountain gorillas (Gorilla beringei beringei), Grauer’s gorilla (Gorilla beringei graueri), eastern chimpanzee (Pan troglodytes schweinfurthii), okapi (Okapi johnstoni) and forest elephant (Loxodonta cyclotis). A total of 13 species of mammal known from the park are considered to be globally endangered. The Virunga population of mountain gorillas straddles the international border with Rwanda, with two thirds of the population resident on the Congolese side of the border.

Exceptionally high biodiversity. The park covers an exceptionally wide altitudinal range (from 680m to 5,119m), and straddles the equator at an ‘ecological crossroads’ in central Africa where 3 bio-geographic regions intersect. As a result it supports an exceptional diversity of habitat types – dense lowland rainforest, montane forest, bamboo, afro-alpine meadows, dry acacia woodlands, savannas, lakes, rivers, swamps and volcanic lava fields with hot springs. An exceptionally high diversity of higher plants (2,077 species) has been recorded and the park has the highest recorded vertebrate diversity of any park on the African continent with 218 mammal species (including 22 primates) and 706 species of birds.

Virunga National Park had the highest number of Hippos in Africa, at the time of its inscription on the world heritage list

Exceptional concentrations of large mammals and mammalian biomass. Lake Edward and the surrounding savannas of the Rwindi plains had the highest known density of hippos in Africa at the time of inscription (with an estimated population of 29,000 in 1974). The mammal biomass of the Rwindi plains in 1960 was one of the highest known anywhere in the world (26.7 tons/km²).

Diverse and active geological features. The Virunga Mountain chain includes two of the world’s most active volcanoes, accounting for 40% of recent volcanic eruptions on the African continent. During episodes of volcanic activity spectacular rivers of lava are a major tourist attraction while the frequent lava flows create a unique mosaic of habitats in different stages of evolution. In the north of the park the Rwenzori Mountains owe their origins to tectonic movements associated with the creation of the Great Rift Valley so their ecology is very different, reflecting their much greater age and relative stability. The Rwenzori Mountain range straddles the equator and includes the continent’s 3rd highest peak and its largest expanse of glaciers.

CONSERVATION STATUS AND PROSPECTS: Despite years of civil unrest and the widespread breakdown of law and order, most of the park’s natural habitats remain largely intact. However, populations of most of the larger animals have been decimated and will take many years to recover, even if effective protection can be provided in future. Existingmanagement capacity is limited and permanently overstretched, despite significant recent improvements. High level political support for the park is insufficient and will be essential for its long-term survival. Oil exploration within the park and the prospect of future exploitation is an overriding concern since it may result in excision of critical areas from the park. The present trend of decline in the park’s biodiversity is reversible if strong political leadership is given to support park management’s law enforcement and conservation actions.

MANAGEMENT EFFECTIVENESS: In an environment of continuing civil strife, insecurity and political instability the park faces enormous management challenges. On a positive note, a significant increase in financial and technical support to the park from public and private partners in recent years has enabled significant improvements in management. The park is currently benefiting from strong leadership and remarkable efforts (and sacrifices) are being made to save its wildlife and world heritage attributes. However, the issues of encroachment, the presence of armed militia, commercial charcoal making, illegal fishing and oil exploration can only be effectively addressed through much stronger political leadership at the highest levels of government.

REVIEW OF CONSERVATION ISSUES AND THREATS: The following issues represent specific threats to the ecology, conservation and values of VirungaNational Park. These threats have arisen as a direct result of decades of poor national governance culminating in two civil wars and continuing civil unrest.

Agricultural encroachment. Subsistence agriculture and illegal settlements within the park occupy an estimated 372 km2 (about 5%) of its total area (according to a 2010 evaluation). This threatens the integrity and viability of the park in many ways, not only from the direct loss of habitat through deforestation etc, but also because illegal settlers often engage in illegal hunting, and settlements affect habitat connectivity and animal movement patterns. Human population densities adjacent to the park are high and 67% of the park boundary is considered to be under moderate or high pressure from neighbouring communities.

Commercial hunting. Elephant, hippo, buffalo and other plains ungulates are seriously threatened by commercial hunting, primarily for the supply of bushmeat to markets in neighbouring cities and towns. The overall biomass of mammals in the central savannas (Rwindi plains) has been very severely reduced by hunting with hippo populations down by 95% since the beginning of the 1990s. Elephants are hunted for ivory as well as meat, while Mountain Gorillas have been killed in a series of well-publicised incidents (the last in 2007 when 10 individuals were lost).

Illegal fishing. Lake Edward (which lies within the park) used to be one of Africa’s most productive lakes, with a limited amount of fishing authorised from villages along the lake’s shoreline. In recent years, however, there has been a massive increase in the size and number of fishing villages within the park and over-fishing has led to dramatic declines in fish catches affecting the food security of many of the 3 million people living around the park and thereby increasing their dependence on other park resources. The increase in numbers of people associated with the fishing villages also impacts the integrity of the park in other more direct ways, as many of them become involved in agriculture, wetland habitat degradation and hunting in areas adjacent to the villages (within the park).

Breakdown of law and order. The civil strife that has plagued regions of eastern DR Congo over recent decades has had a long-standing impact on the park. Its resources have been progressively exploited and degraded by armies, rebel groups, refugees and impoverished locals operating in a free-for-all environment which park management has struggled to control. Today, parts of the park are occupied by three groups of militia (FDLR, Mai Mai, ADF-NALU), all of which are involved in illegal exploitation of resources, including charcoal production, poaching and agricultural activities. These armed militia present a direct challenge to park authorities (and have been responsible for a significant number of deaths amongst the park ranger force), as well as de-stabilising local communities and making long-term park-based economic development impossible.

Charcoal production. Commercial charcoal making operations are destroying the biologically unique dry forests around the two active volcanoes in the southern part of the park. Much of this highly-lucrative activity is controlled by FDLR militias (with Congolese army involvement), so park authorities are unable to stop it.

Molten lava in the crater of Mount Nyarigongo, one of Africa’s most active volcanoes which lies in the southern sector of Virunga National Park

Volcanic activity. Eruptions and lava flows from the two active volcanoes destroy significant areas of dry forest during each volcanic episode, exacerbating the loss of this important habitat caused by charcoal production. Rare and endangered species such as chimpanzee and l’Hoesti monkey are particularly badly affected by this habitat loss.

Oil exploration was initiated in the Lake Edward Basin in the central part of Lake Virunga Park, but has now ceased in response to international pressure to preserve and respect the world heritage site

Oil and Gas Exploration. In what has become a highly controversial issue, the government of DR Congo has awarded oil exploration licenses covering 85 % of the park. The desire to explore for oil within the park is understandable, given that several major oil discoveries have been made in other parts of the Great Rift Valley in recent years, but the award of exploration concessions within a world heritage site is especially contentious. The two international companies with concessions covering parts of the park (TOTAL and SOCO International) have responded positively to international pressure and refrained (or ceased) exploration activities in the park, at least for the time being. The government of DR Congo has, on the other hand, warned that it is considering de-gazetting parts of the park and/or re-aligning the boundaries of the world heritage site to allow for exploration and/or possible future exploitation of hydrocarbon resources.