You are here: Home1 / All featured sites2 / Whale Sanctuary of El Vizcaino

EXPLORE Whale Sanctuary of El Vizcaino with this slideshow, check the location map and get all the facts and information below. 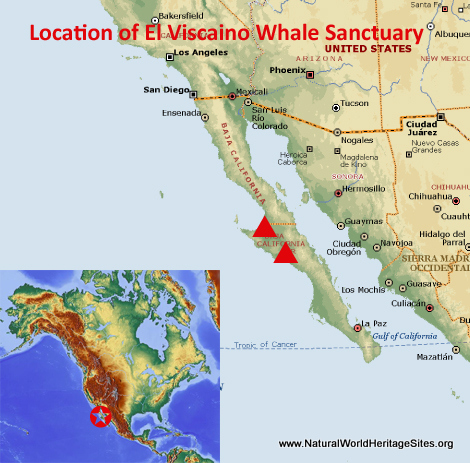 Location and Values: The Whale Sanctuary of El Vizcaino is located along the western (Pacific) shores of the Baja California peninsula in north-western Mexico. It is a serial site, protecting two extensive shallow coastal lagoons (Laguna Ojo de Liebre and Laguna San Ignacio) that serve as the most important place in the world for the reproduction of the eastern population of the North Pacific Grey Whale. This species was brought to the brink of extinction by commercial whaling, and the protection of these lagoons has played a key role in its remarkable recent recovery. The whales undertake an 8,000 km annual migration between their overwintering grounds in these lagoons and their main feeding areas in the Bering Sea.
In addition to its importance for the grey whale, the sanctuary supports a complex mosaic of wetlands, marshes, mangroves, halophytes, dunes and desert habitats which serve as highly productive nurseries for a diverse fish fauna, and habitat for an extraordinary diversity and abundance of overwintering birds. The marine and coastal areas also support other key species, including bottlenose dolphins, blue whales, California sea lions, elephant seals, harbor seals and four species of marine turtle

Conservation Status and Prospects. According to IUCN’s Conservation Outlook Assessment (2017) the conservation status of the Whale Sanctuary of El Vizcaino is ‘good, with some concerns’. The IUCN report notes that biodiversity values are being well maintained, and threats that were previously impacting the site, including agricultural and livestock development, overfishing, illegal fishing and garbage disposal have been brought under control. However there is still concern about the possible future impacts of (1) depletion of freshwater aquifers, (2) climate change, (3) uncontrolled tourism development, (4) the accidental escape of brine into the lagoons from salt factories on the site margins, and (5) possible future exploration for oil, gas and other minerals, as well as geothermal resources.

The slideshow ‘tells the story’ of the Whale Sanctuary of El Vizcaino with a portfolio of photos by Peter Howard from a visit to the Laguna Ojo de Liebre during the second week of January 2020. Although some whales were present in the lagoon at this time, the bulk of the population had not yet arrived so there were limited opportunities to photograph these great creatures in their breeding grounds. A little later in the (rather short) season, close encounters are often possible here, more than anywhere else in the world. Most of the whales returning to the lagoons were born here, so they are familiar with small tourist launches, and may even approach them out of curiosity. Indeed, whales seem to enjoy the sensation of a warm jet of water from an outboard motor on their tongue, thus attracting the giant mammals very close to tourist launches to get this experience.

The slideshow features several aspects of the visitor experience, showing the lagoon scenery, salt pans, expanses of halophytic vegetation, and low sand dunes. A boat excursion across the lagoon is illustrated, and photos of the backs of several whales breaking the water surface are included, as well as dolphins, ospreys, pelicans and a variety of overwintering migrant wading birds. A small visitor centre is located near the jetty on the northern shore of the lagoon, with some informative displays and a complete whale skeleton. Another private ‘whale museum’ (Museo de la Ballena) is located in the nearby town of Guerrero Negro, with further exhibits and information, some of which is included towards the end of the slideshow. The last couple of images show some of the industrial equipment and the environmental impact of salt extraction around the northern shores of the lagoon, which may threaten the site.

Islands and Protected Areas of the Gulf of California