You are here: Home1 / All featured sites2 / Yellowstone National Park

EXPLORE THE USA’S YELLOWSTONE NATIONAL PARK with this slideshow, check the location map and get all the facts and information below. 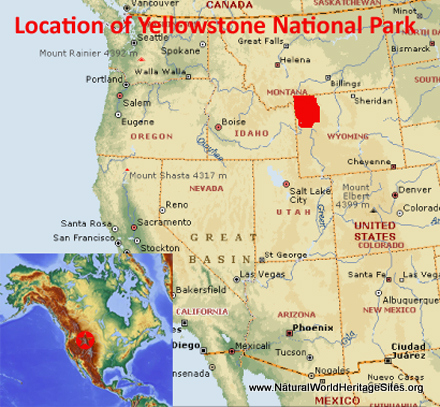 Location and Values: Yellowstone National Park occupies almost 9,000 km2 of mountainous land astride the North American continental divide in the high Rocky Mountains of Wyoming, Montana and Idaho. At its core lies a giant dormant volcano and the world’s largest caldera (45km x 75km), with half of all the world’s known geothermal features and the world’s largest concentration of geysers (more than two thirds of the world total).

Conservation Status and Prospects. According to IUCN’s recent Conservation Outlook Assessment the conservation status of Yellowstone is ‘good with some concerns’. The IUCN report notes that ‘the trend since 1995 when Yellowstone was added to the List of World Heritage in Danger has been a gradual improvement in the state of conservation, with Yellowstone’s removal from the Danger list in 2003. Six original threats (mining outside park, threats to bison, threats to cutthroat trout, water quality issues, road impacts, and visitor use impacts) are still long-term concerns while new and emerging threats have been identified including: ground transport infrastructure, effects arising from use of transportation infrastructure, surface water pollution, air pollution, input of excess energy, invasive / alien freshwater species, effects of management systems/ management plan, the risk to grizzly bears from declining whitebark pine, the severity of bark pine beetle infestation, the role of changing temperatures in the ecosystem, maintenance of bison migration routes, mitigation of human-grizzly bear conflict, and the population’s connectivity with the larger population of bears in the region. Many of these threats are beyond the control of the National Park Service and/or depend upon conditions outside the borders of Yellowstone National Park. They are however critical factors that can degrade the ecological integrity of the World Heritage Site. It is likely that maintaining the values of Yellowstone in the future will depend upon cooperative efforts among the National Park Service, other federal and state agencies, nongovernmental organizations, and the private sector.’

The photos in this slideshow are intended to ‘tell the story’ of Yellowstone National Park, showing the diversity and scale of the geological features, as well as some of the plants and animals of the temperate coniferous forest and other park habitats. Most of the well-known features are shown, including Old Faithful and other geysers, Grand Prismatic Spring and the spectacular travertine terraces in the Mammoth Hot Springs area. Elsewhere the Grand Canyon of the Yellowstone is shown, and the variety of habitats experienced during a hike to the snow-capped summit of Mount Washburn (3,122m) and the lower-lying wildlife-rich Lamar Valley in the north-east of the park.